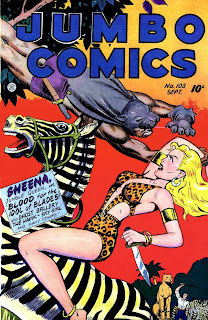 
Tough blondes of the jungle


Characters like Sheena the Queen of the Jungle, and Lorna the Jungle Girl (who was demoted after five issues of being Lorna the Jungle Queen), were strong, beautiful, capable women battling men and beasts in a world of beastly men. Nowadays plots like these aren't so unusual, but in the 1940s and '50s they were. Women were mothers, "sweethearts," nice girls who, if they worked, did it until they got married and then raised a family. I can't imagine Sheena having babies. Though stronger than most men, Sheena is still very sexy, even as she grabs a man by the short and curlies and flings him through the air into the treeline. Maybe that's what appealed to some of the guys who read Jumbo Comics. Sheena's mate, Bob, gets in messes all the time and she has to go in and rescue him. In the splash panel he's looking kind of useless. Brave Sheena holds him like a child while simultaneously holding off the enemy.

Guys who read Sheena might've had a secret yen to have a strong woman come in and rescue them. (Doc Wertham would have an opinion on such fellows.) Anyway, I see it as harmless fun, even as I cast my glims over panel after panel of pulchritudinous jungle babery. 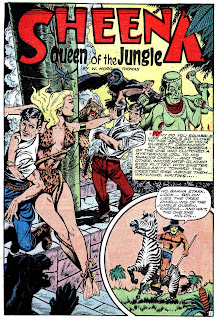 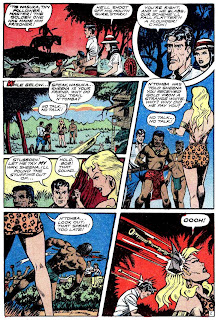 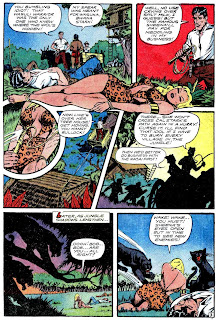 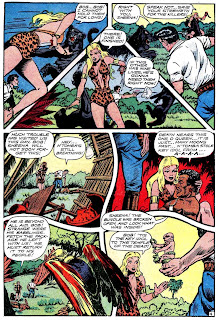 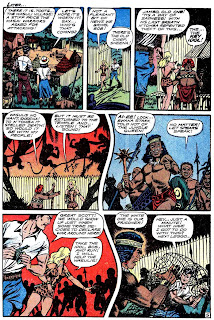 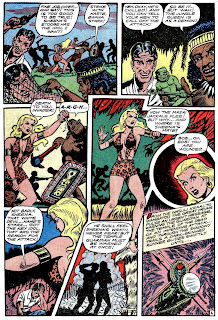 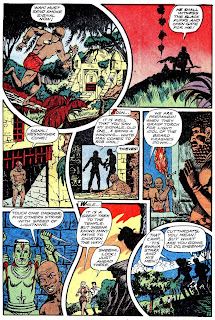 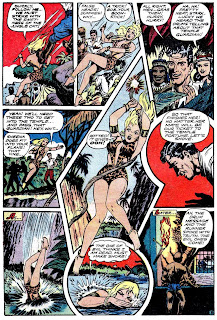 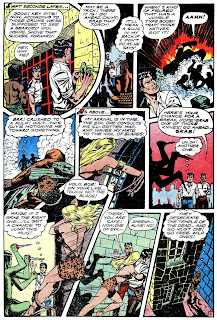 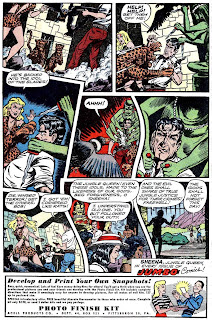 Lorna also had a boyfriend problem. Greg, her significant other, is a male chauvinist. He's constantly ranting about how women don't belong in the jungle, all while Lorna is pulling his sorry ass out of trap after trap. In his story she saves him from some commies! It's from Lorna the Jungle Girl #9, 1954, drawn by Werner Roth.

Is the jungle big enough for two powerful women like Sheena and Lorna? Maybe we could get them to fight for the honor of being true queen of the jungle. A nice mud wrestle would do. In the meantime Bob and Greg could put on aprons and bake cookies. 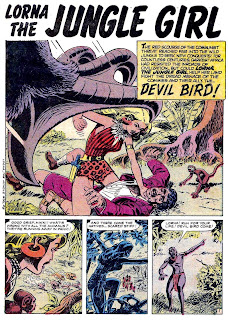 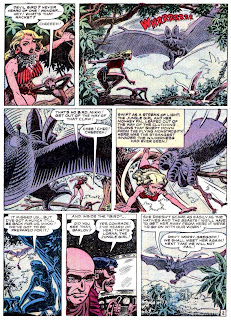 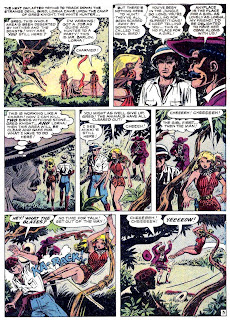 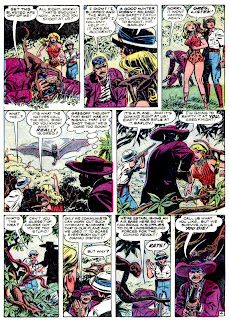 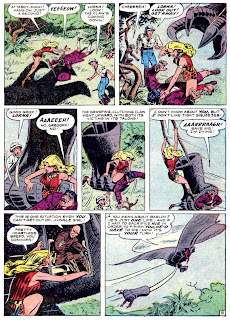 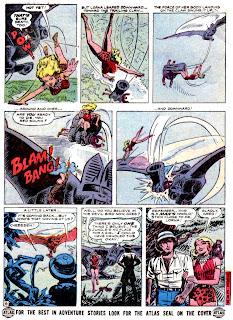 I gots me a real soft spot in my heart for them Jungle Girls.

I think that someone could pretty much clean-up in the comic book business with the right sort of composite of Sheena and Wonder Woman.

(The implied physics at play on the final page of the Lorna story is the sort of thing that Chuck Jones would have offered as a joke in a Roadrunner cartoon! Somehow there's notably more energy in the fourth panel than in the first!)

That is an awesome Sheena story, Pappy and I just picked up a nice copy of the final issue of Lorna the Jungle Queen on "Free Comic Book Day".

That one wasn't free at all, but it is a high grade copy that I handily rescued before somebody could have the thing slabbed.

Chuck, I love finding comics like that. I found Black Knight #3 in a box at an antiques fair last October and snapped it up.

Daniel, I looked at those last panels of the Lorna story in a different way after your comment about Chuck Jones.

These are both top-notch jungle-girl stories.

A lot of the art in jungle-stories is pretty pedestrian, but the Sheena stories always look very dynamic, though I presume that they were drawn by many different artists, most of whom aren't well-known today, except perhaps Mort Meskin.

The "male chauvinism" schtick in LORNA is priceless. If Marvel had brought Lorna and Greg back in the 70's, she'd of probably kicked his ass and made him like it.

And yes, Doc Wertham would certainly not approve of such "manly" women.

I'm always struck by the creative panel layouts for those Sheena stories. Great fun! Thanks, as always, Pappy.

Sheena fans will be interested to know the new Sheena movie has advanced quite a bit. I heard it may have been cast depending on studio scrpt approval. Who is the new Sheena?

Also all the Irish McCalla Sheena episodes have been located by a DVD company. I hope they put them out soon. See videoclips and rare Sheena photos at:
http://terrororstralis.com/sheena.htm