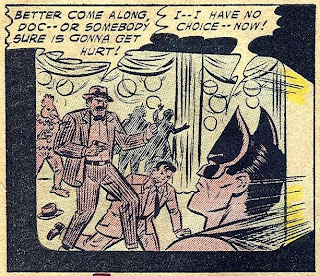 
Tattered, worn, battered, torn...Detective Comics #235 rests in a comic book bag in a box in my basement. I lost the cover eons ago. This comic is one I bought in the summer of 1956, just after my ninth birthday, when I took my 50¢ allowance to the drugstore for my weekly ration of comics and a candy bar. I was knocked on my keister by this story, written by Bill Finger and drawn by Bob Kane's ghost, Shelly Moldoff. I didn't know about Finger or Moldoff at the time, obviously. It was the first time I'd seen Batman's origin, and I was impressed. Detective Comics #235 is one of those comics I treated shabbily as a kid with repeated re-readings and mishandling until it ended up like this.

Batman was a favorite character of mine. In 1956 I was considered the neighborhood expert. "Does the Batman fly?" asked my neighbor, Bobby. "No," I said, "Not unless Superman carries him." That was what passed for expert.

This is one of the books I'll keep until they pry it from my cold, dead fingers. Not that anyone else would really want it, being in the poor-minus condition it is. Just so you can see how bad it is, I've scanned it without cleaning it up.

I haven't read any Batman comics in a long time, and no recent stories. When I quit reading I felt that too many hands were working over the character, writing and rewriting the legends.

This beat-up old comic book is a sentimental favorite of mine, as you can probably tell. 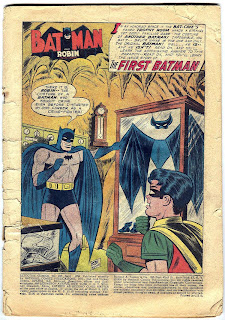 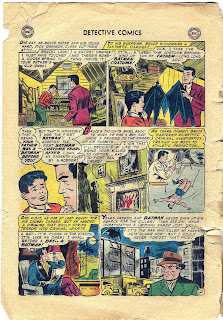 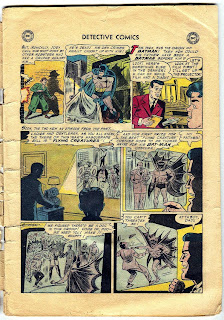 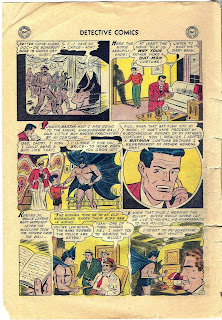 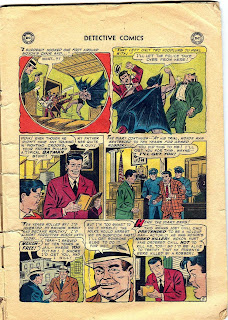 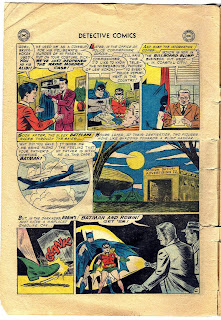 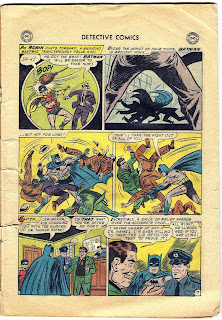 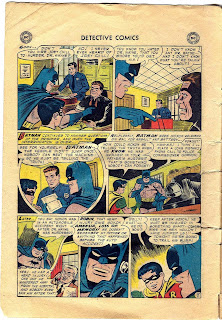 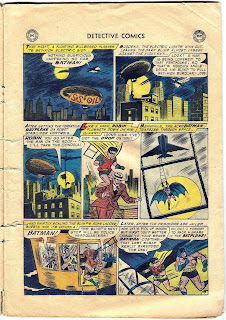 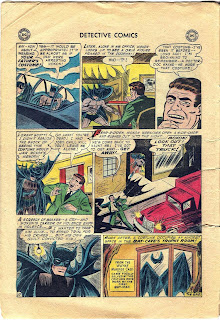 I had that story too, but can't recall which issue it was in for me. Thanks for the nostalgia.

This was one of the first Batman comics I read as a kid around 1961. I traded a kid down the street a couple of Archies for it. I don't have my original copy any more, just the Greatest Batman Stories Ever Told reprint.

Treated shabbily by repeated readings? "Nay" I say...treated like the gold it is and for what it was intended for, is what it was (and is).

NEVER trust a book (comic or otherwise) that someone recommends, that ISN'T dog-eared and frayed and yellowed. That my friend, is a book that has never been read.

I hope they leave this one in your cold dead hands when you go (many, many years from now) and let you take it with you!

Considering the trading and selling I've done over the past five decades I'm surprised I still have this. Also, some comics just got lost along the way during moves and various other disruptions in my life, but I managed to hang onto this one.

I think the fact that "The First Batman" been reprinted so many times shows that it's an important story in the Batman mythology.

Jeff, I like your idea of taking this with me when I go.

Pappy: You are a true believer, my friend. How you managed to preserve this treasure despite your loving torture is a wonder.

I can smell the pulp. Heaven!

Mykal, I'll have to remember "loving torture", because that perfectly describes the ordeals I put some of my most-loved comics through.

I still have Humbug #3. I used to bend, fold, spindle and mutilate the poor thing. It's still readable, but barely. I didn't get wise until I was about 12 or 13 that comics, like people, don't like being treated rough. Well, most people, anyway.

My terrible habit was to fold comics down the middle and carry them in my back pocket. After a couple of weeks of being my best friend, I'd throw them into the trash. Funny thing is, those comics have made my most precious memories of comic book reading. Mostly Harvey comics got this treatment.

Pappy: This was always a favorite of mine. Thanks for posting it! I may have to dig out some Batman.

some of the best, most cherished comics in my collection don't have covers either... some of them have panels missing too as I used to cut out my fave panels and hang them in my locker at school.

I believe that the first time that I read some origin story for the Batman was when the original was reprinted in one of the paperback books issues in the late-mid '60s. (Still have that, in a box somewhere.)

I'm glad I'm not the only person who committed comic abuse. Maybe we should get up a group therapy or something, talk it out.

Something I always liked about this story was the name of the hired killer: Joey Chill. Perfect name for a bad guy.

Yeah, I'm changing the subject a little. But after I die, if anybody finds the unlabeled reel of 8mm film in my secret drawer, don't, you know, rush off and show it to any kids. Thanks.