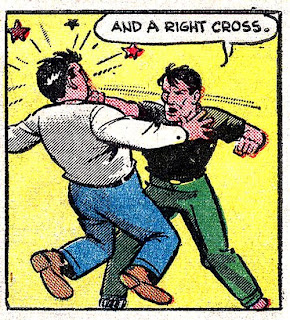 Number 801
Continuing Wash Tubbs and Captain Easy...
We're showing Wash Tubbs Dell Four Color #53, from 1944, reprinting 1939 and 1940 comic strips. This is part 2 of our story...if you haven't done so yet, go back to Wednesday's posting to start from the beginning.
During the 1980s there was a resurgence of interest in cartoonist Roy Crane. NBM published 18 volumes of his collected dailies and Sundays, and Dragon Lady Press out of Toronto did some really fine-looking compilations in several saddle-stitched magazines. There was interest because it was recognized, even 50 or 60 years after the original Crane Wash Tubbs and Captain Easy strips had appeared, that these were great stories, told by a master. Thanks to the people who put their money where their mouths were, Crane's classic work was introduced to a new generation.
In the heyday of the comic strips people bought a newspaper every day so they wouldn't miss an episode of their favorite continuity strip. Roy Crane was one of the forefathers of modern comic books. He started that move toward adventure comic strips, which in turn were reprinted in comic books, and when that supply ran short spawned an industry doing original stories using original characters. 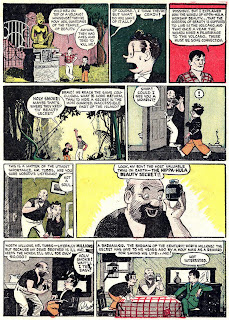 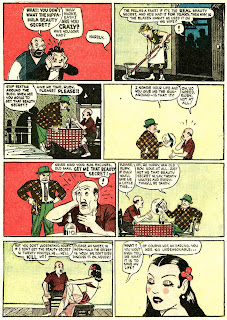 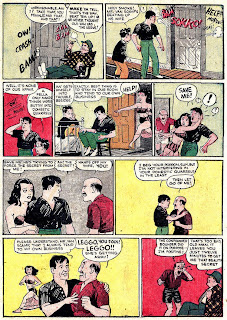 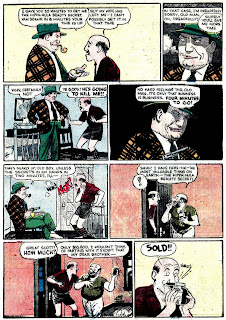 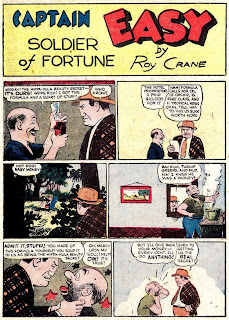 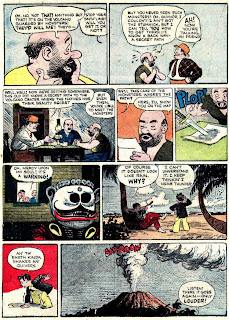 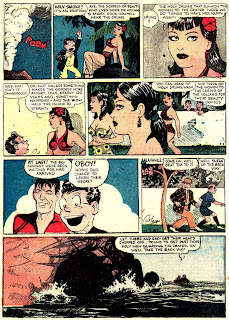 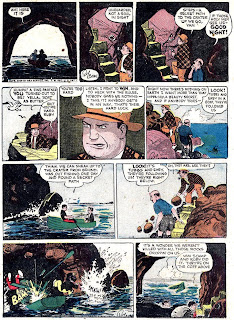 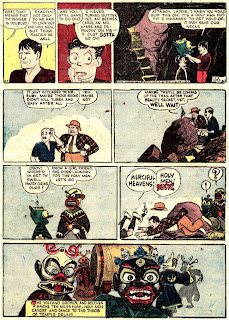 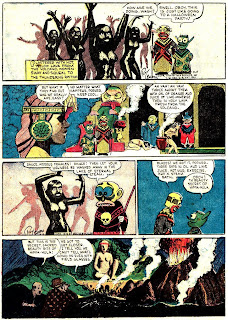 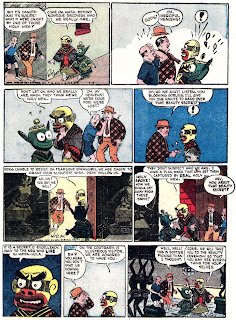 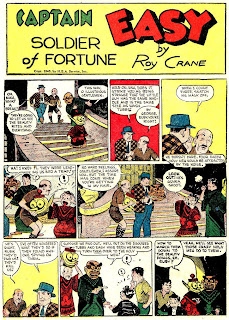 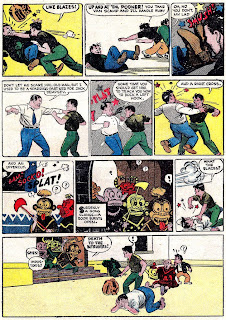 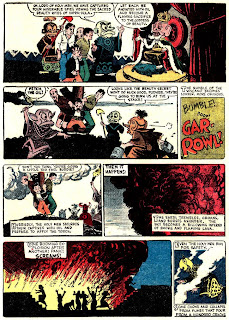 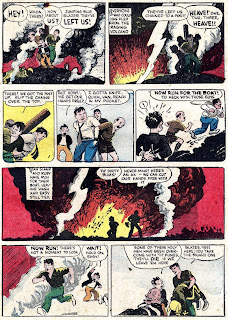 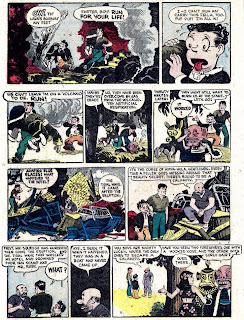 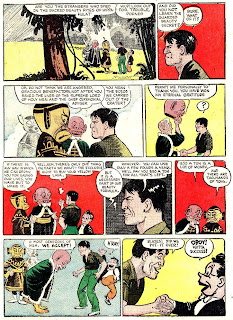 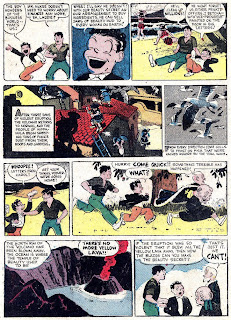 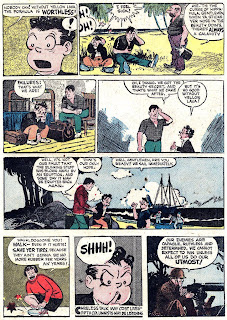 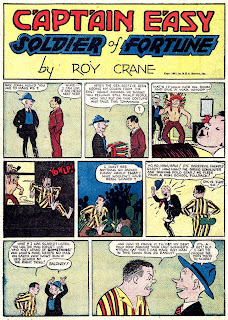 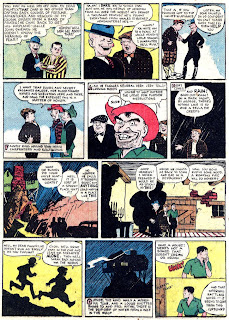 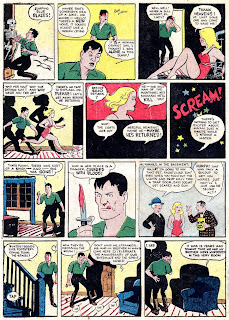 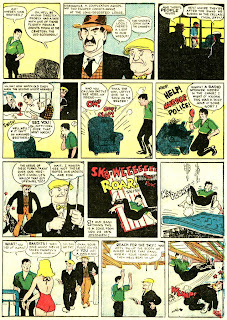 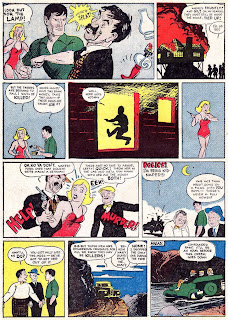 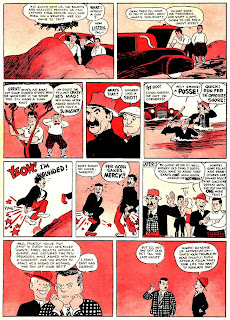 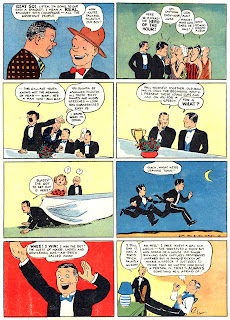 I'm quite revolted that the “heroes” felt that they shouldn't intervene when a man was beating his wife.

Daniel, sadly there was a time when it was considered "none of your business" even when witnessing domestic violence.

I show the comics as they were, when the thinking on many things was different than it is today. I'm not making excuses for them, but besides being comic art I see them as historical documents on attitudes toward women, racism, etc. At times they show that things taken for granted in our grandparents' and parents' generations weren't always nostalgic or rosy, but to modern sensibilities sometimes appalling.

Pappy— I quite appreciate being shown the comics as-they-were. (Some of the 'blogs that I follow seldom or never feature comic books that actually entertain me, but which evoke the social scientist in me.) And I don't feel that 'bloggers need to provide warnings, disclaimers, or personal disavowals every time that they offer offensive material.

Meanwhile, I'm sure that you can appreciate the need to growl, however impotently, about the offense.

Daniel, I like your self-description as "social scientist," because, untrained though I am, I feel much the same way. I think all popular culture exposes then-current attitudes. Sometimes I forget to put a disclaimer in my text. I feel the need to issue disclaimers because I might have readers who are encountering my blog for the first time, or who are linked to it because of the subject matter and I don't want them misunderstanding my intentions, which are not to ridicule but to show those aforementioned attitudes as part of the comic art.

Since I've done a lot of stories published during World War II I've wondered what readers in Germany and Japan might think of the hideous caricatures from that era. So far I haven't heard from any of them. I haven't heard from African-American readers either. I have shown racist black characters before, but only after a lot of thought, and deciding whether they fit into the context of the story.

Either I don't have members of those groups reading my blog, or they understand that what I'm showing isn't what I think.

I appreciate your occasional growl. Your comments are always well thought out. If something bothers you go ahead and point it out.