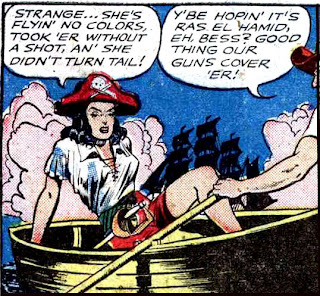 Number 810
Arrrrrrggghhhhh. It's Talk Like A Pirate Day...again
Here we are again, and yet another tip of the Pappy cappy to those days of yore, sailin' o'er the bounding main, pirate lads...and pirate lassies.
Black Bess be one of those lassies. She showed up in Fight Comics #53, 1947, in the Captain Fight story. Personally, I wish she'd stuck around a little longer, because I like the short-shorts and long legs. I also love the pirate hat. Red with a jolly roger! I guess there's no mistaking who she is, is there?
The story is drawn by Jack Kamen. 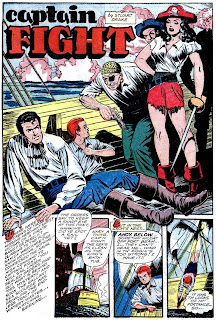 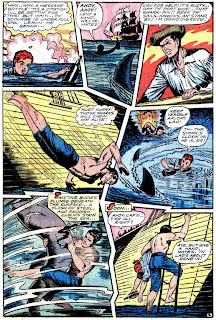 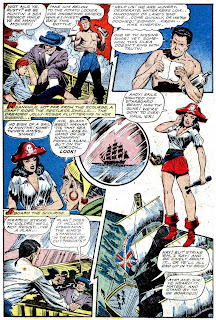 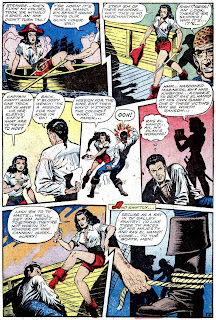 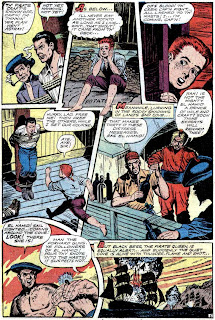 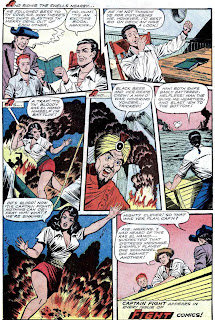 Arrrgh, that be pure gold, me 'hearty!

According to the GCD, Black Bess appeared previously in Jumbo Comics #103 (Sept 1947). Apparently this is her last appearance.
Hope this helps,
Darci

Thanks, Darci. I have Jumbo #103 and will have to post some of it sometime. The Hawk story in that issue is drawn by Robert Webb, and Black Bess has a different look.

Pappy: If I am remembering correctly, Kamen's pals at EC used to call him "Clothes" Kamen for his skill at drawing the shadows and folds in clothes so that they looked really life-like. Man, you can really see him demonstrating that skill here!

Mykal, the "Clothes" nickname is one I hadn't heard before, but I can see why his contemporaries would say that about him.