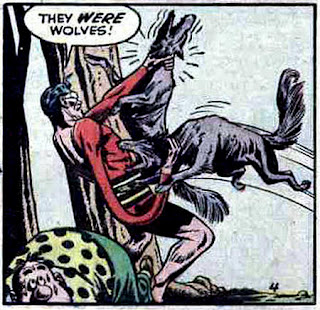 Number 802
Plastic Man and the witch of Wailing Woods
Once upon a midnight dreary, as I blogged weak and weary...over some comic tome of forgotten bore...
...'scuse me. I get carried away sometimes. Once upon a midnight dreary, I should say, I posted a Plastic Man story in Pappy's #483. Karswell, of the superb The Horrors Of It All blog asked me to show some more Plastic Man stories with a horror theme. It's been a year-anna-half, Stevie bwah, but here's your wish! I may be be diligent in getting to requests, but also dilatory.
The Grand Comics Database says it's Alex Kotzky? meaning they don't know, they're guessing. I can guess, too. "The Witch Of Wailing Woods," from Plastic Man #42, 1953, looks like it was drawn by Jack Cole and heavily inked by one of Quality Comics' ink-happy finishers, maybe Chuck Cuidera. But picture me, on that midnight dreary, shrugging my shoulders and saying, "I dunno, Poe," if asked if I have more than three or four dozen years looking at Cole's artwork to qualify me for my guess.
I've got another horror story, this time by Bernard Baily, coming up on Wednesday. 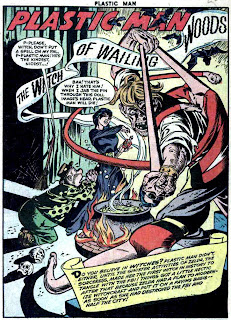 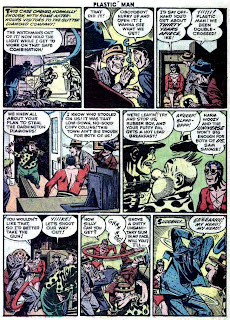 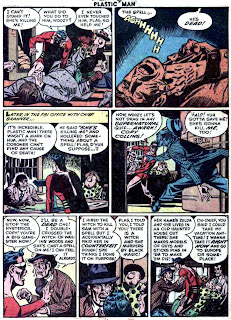 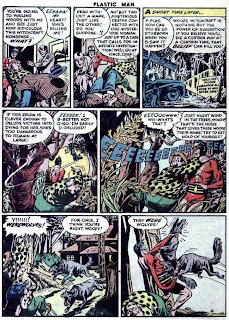 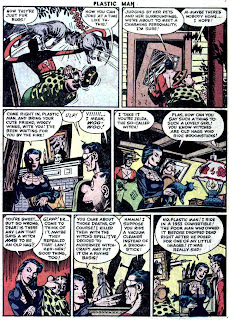 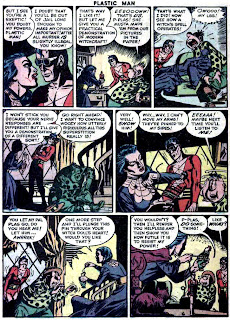 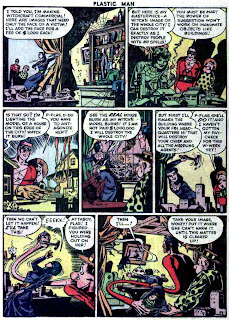 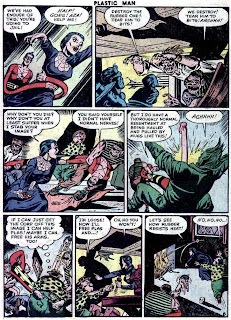 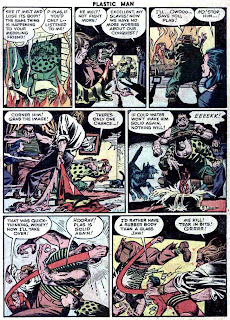 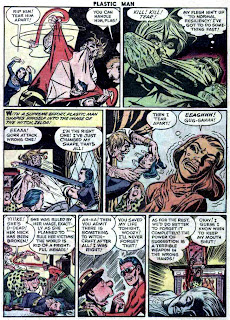 Yow! Heavily inked and then some, but you know, I really like it! The heavy blacks give Plas a real drama and edginess - maybe even a darkness for an extra dimension (which I guess was probably the intent).

I don't know, either, of course (Pap, ol' boy, if you don't know, I haven't got a prayer). But it does look like Cole's layouts and composition to me.

Mykal, I can't say for 100% certainty that all of this strip is by Cole, but when I look at a page like page 8, I know that page is penciled by Cole; pages 9 and 10 look like Cole. I can usually tell Cole by his layouts and the arrangement of the action in a panel. As with page 8, he drew figures in motion from unusual angles.

Man, the inker sure did put his stamp on this one, didn't he? I like it more and more.

That story had a clever … twist … ending.

Daniel, I wish I'd thought of that line.

Thanks Pappy, I'm gonna love reading this one!

Thanks for posting, Pappy! I agree with you that Cole penciled this story. I also think it's possible he inked it. Although the inking is not stylistically similar to his earlier work, this story is very consistent with his work of the early 1950's. During that last phase of his comic book career, Cole's forms became more three dimensional and his panels were drenched in inky black shadows. Also, intense, extraordinary, Goya-like images of terror and suffering became the visual centerpieces of these last, very strange stories.

Don't you just love this guy? This calls for a trip over to Cole's Comics.