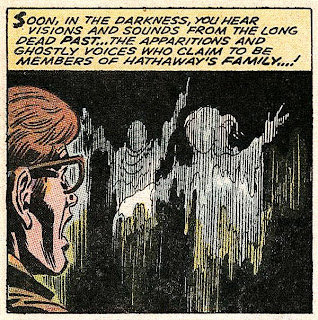 
I knew when I bought Tower of Shadows #1 off the stands in the summer of 1969 that something was wrong. The lead story by Steranko was great, but the story credited to Johnny Craig — THE Johnny Craig of EC fame, Vault Of Horror, Crime SuspenStories, Extra! — just didn't look like Johnny Craig. As I found out from reading this, it was and it wasn't:

The following year [1969], when Marvel launched two "ghost" comics, some there felt they'd found a place to better utilize the skills of Johnny Craig. He wrote and drew a story for Tower of Shadows #1 but, again, Stan did not feel the result looked like a Marvel comic. As with Craig's one DC job, the work was retouched so thoroughly — in this case, by John Romita — that no trace of the original artist's style remained. --Mark Evanier, POVonline, September 20, 2001.

It was obvious looking at the artwork that it'd been retouched by Romita, but there are traces of Craig in the writing, which was probably also heavily edited by Stan Lee. On page two, a couple of panels show the main character upset because "Janie" is expecting a baby, now of all times, when a dozen creditors are hounding him. An unwanted pregnancy and need for money, that's a story in and of itself, but after those panels it drops into nothingness. It has nothing to do with the story itself, about a man exposing phony mediums. Craig was too careful a plotter and writer to create a situation and then let it languish, so I suspect there might have been something edited out. I'm not even sure why what was left in remained, since it added nothing to the plot.

What is Craig are the panels in the rain. I go back to the EC Comics. A man in an overcoat with his collar up, wearing a fedora, leather gloves folded down at the wrist, a gun in his hand, waiting in the rain. Craig could really draw noir scenes like that, and that's the closest part of "From Beyond the Brink" to the Johnny Craig I knew from EC Comics. Some artists flourished under the Marvel style, others didn't. Sadly, Johnny Craig was one of those whose artwork probably belonged more to a time and a place that, in the Marvel era, had past. 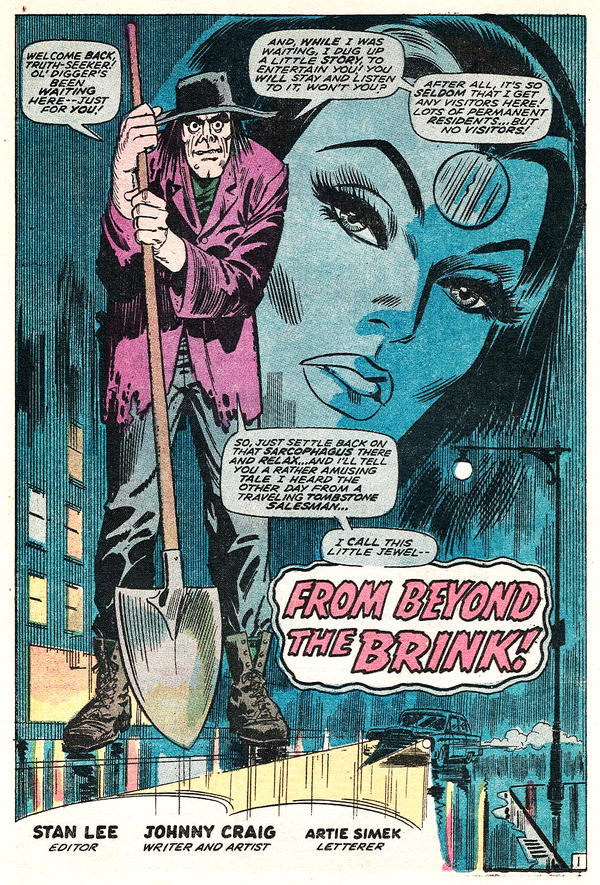 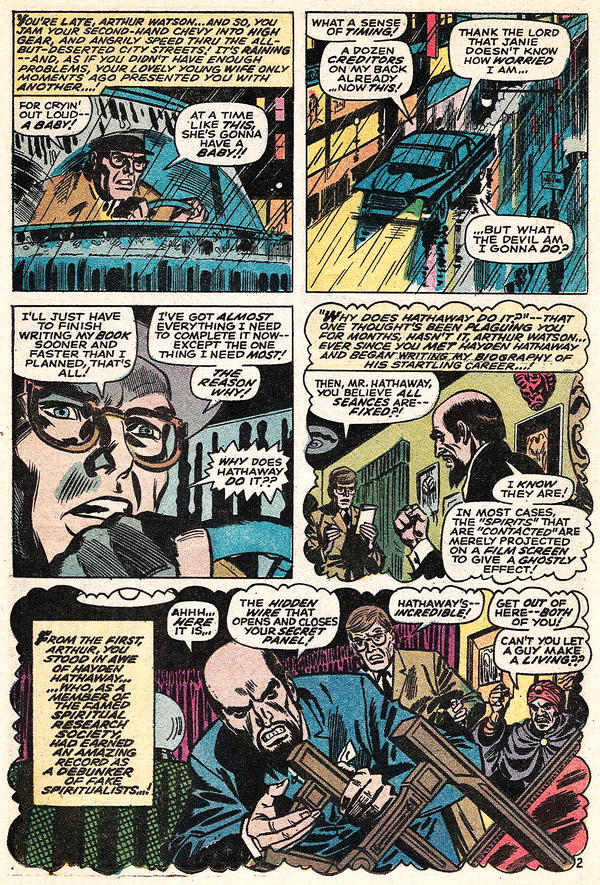 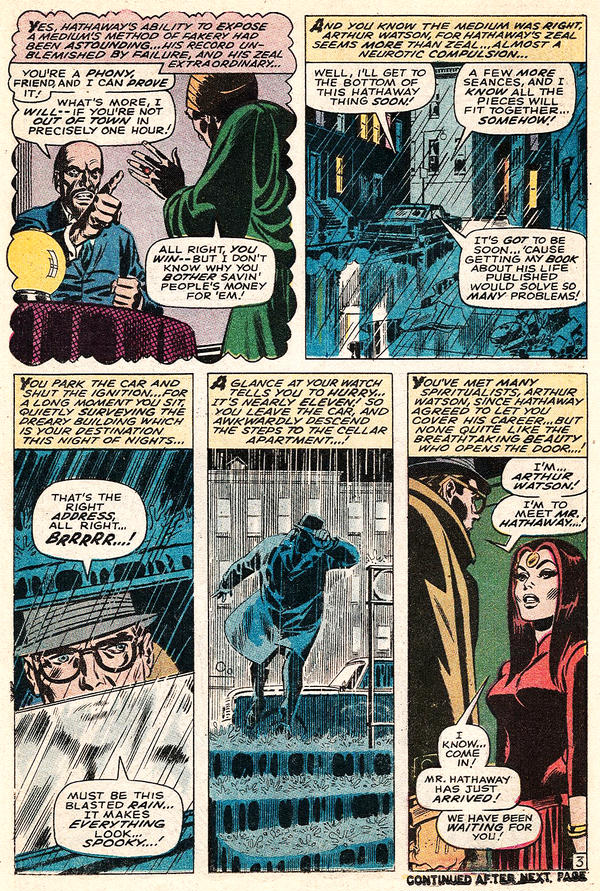 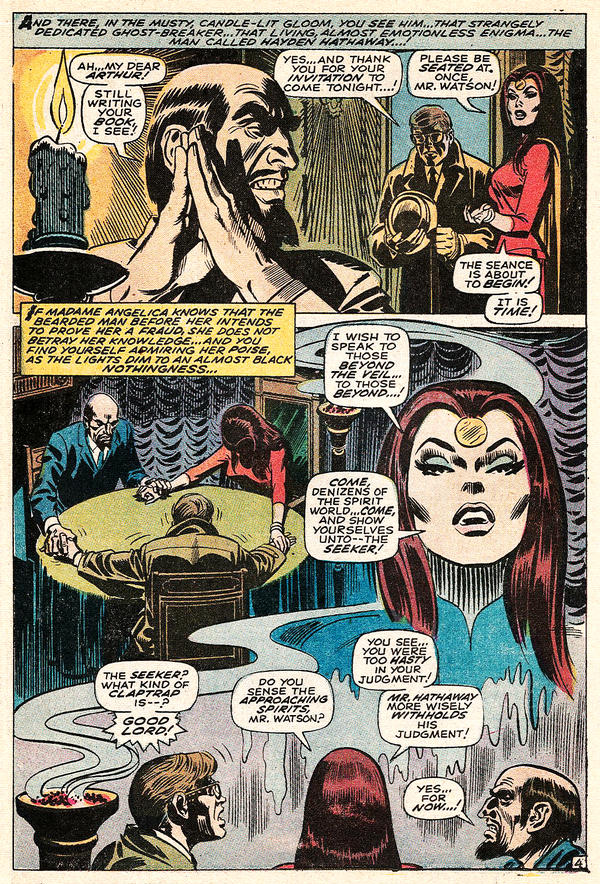 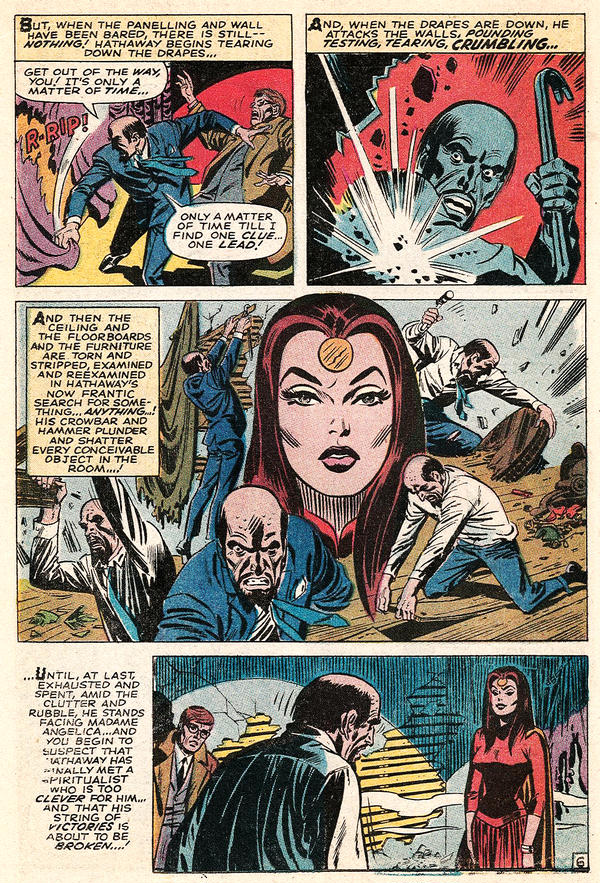 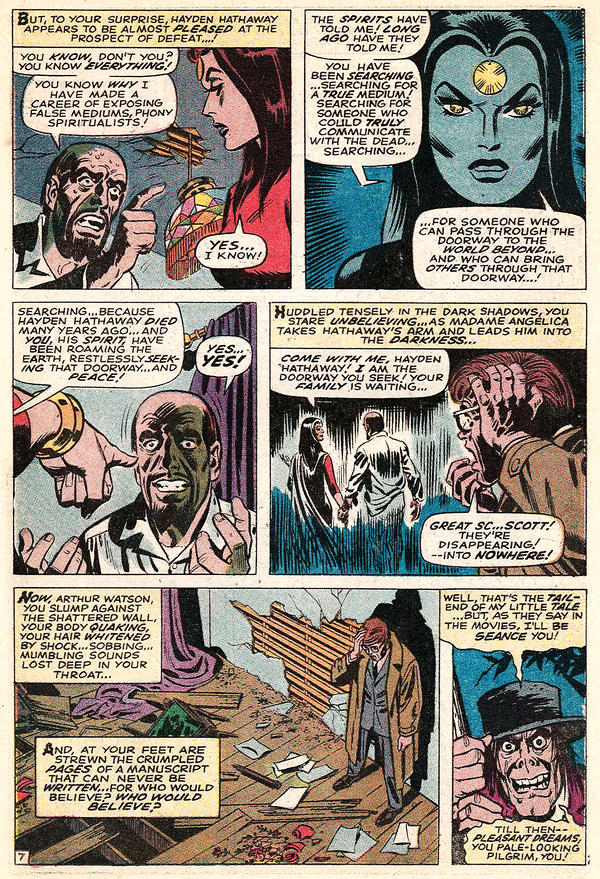 Pappy, I almost liked reading the opening paragraph that detailed the history of this story more than the story itself.

Craig really got the shaft on this effort, and he wasn't the first comic book artist to suffer this kind of fate, but any "Jazzy" John Romita work is good stuff AND fine by me.

I think Stan Lee gave Craig a fair shot at it, but Craig was--by his own admission--slow and meticulous. The fast artists were the stars of Marvel Comics, Kirby, Romita, Buscema, et al., and the need to get it done quickly was an established part of the job. Lee tried Craig on some projects but he just didn't fit into the Marvel Comics style.

Several EC artists had work published by Marvel, but I can't think of anyone who stayed very long.

I remember how happy I was to see Johnny Craig's first stories in Creepy and Eerie, because like EC, Warren's magazines were full of individual styles, not a house style like Marvel.

I wonder if Craig opened up that issue of Tower of Shadows and saw that his work had been heavily worked over, or if he knew about it ahead of time. It must've been disappointing. I was also aware, 40 years ago, that the heavy hand of Romita was all over the strip, but no credit was given, so to a more casual reader it must've seemed like, "Hey, this Craig guy draws a lot like that guy that draws Spider-Man!"

Yeah, ya gotta wonder why Romita was not given at least co-credit...possibly top billing even. It's a nicely illlustrated piece, too! But other than those rain-drenched streets, I don't really detect much Craig left!

So wait a minute. Apparently every single character in the whole story was equally able to communicate with the dead. I think the ghost was just looking for a cute one. I mean, cut-and-paste Stan Lee second person accusatory narration aside, this guy wasn't exactly the "living, almost emotionless enigma" he was cracked up to be.

This was a really wonderful story and back-story today Pappy. I want to see the original pages now, see if the evidence of alteration can teach us any more about the way the story might have originally looked. I assume that all those Marvel-age center montage floating character heads were added later on, right?

Man, it seems like it would be tough to take something finished, and relatively signature, and then alter it to jive with a house style. I'd love to see the practical side-by-side comparison of how that was done. I'm boggled.

A lot of the stories in Marvel's "ghost books" were qualified failures. Their house style wasn't really suited to this sort of thing anymore (Ditko, the one artist who could have done it, was long gone), and Code restrictions plus 1969 sensibilities wouldn't have let them do real horror. I didn't even think Steranko's story worked for them...a great buildup but too little payoff. Barry Smith didn't seem to drop the ball for them, but Kirby, Wrightson, and Adams did. It probably made more sense to convert them to reprint books. At least Steve Englehart came in through this venure.

"Horror" comics like Tower of Shadows #1 were done under the original, stricter Comics Code. As we see by this tepid tale, something was sucked out of the story that would have given it any real impact. A couple of years later they got some needed changes to the Code and went back to the classic vampires and werewolves.

But back to Tower of Shadows #1...besides the art changes to the Craig story, that host, the Digger, yuccch. Real lame for a horror host.

craig did do some nice inks over tuska on the iron man books circa 1968, so just a little bit earlier than this story, but it reduces a man of craig's talent to a technician, not a real artist. It is a way to make a living however unsatisfying it might have been. I love the tower of shadows books in the early days as they were a bizarre hodge podge of new talent and old trying very hard to fit under the marvel umbrella and failing miserably. Issue #3 would have a wrightson cover, i believe, as well as a smith story that might have been some pretty early material resurrected. you never know.

I did an appreciation of Tower of Shadows #1 a long time ago here:
http://inkdestroyedmybrush.blogspot.com/2006/08/must-see-books-tower-of-shadows-1.html
but i wish that i had your post to have read back then. Great information!

Until now I'd been completely unaware of Johnny Craig, and was 'marvel'ling how it'd been possible for me to fail to pick up the name of a guy who'd clearly drawn some of the post Ditko Spidermans - until I started reading the blog part of the blog and realised what I was looking at was really the work of John Romita!

But when I started googling for images of Craig's work not only did I realise just how much Stan Lee'd butchered the work of a sublime artist, (supposedly for the purpose of maintaining Marvel's house style) but also, paradoxically, what a powerful influence Craig's style'd clearly'd had not only on Marvel but DC!

Presumably Stan could only see the DC in Craig, but not the Marvel!

Great to see this one, read your backstory and everyone's comments.

I mentioned on Karswell's blog a while back that I'd recently rediscovered an old issue of Iron Man #24 (drawn by Craig/inked by Tuska) where as an impressionable kid the action stuff didn't really say 'Marvel' to me - though looking at the more low-key scenes now, they still retain Craig's stylishness. With this story I found it a real push to see his hand in it at all. I too had to check the credits again for Romita's name as I was sure there must be an inking credit ...or something.

BTW, I wonder exactly how slow Craig was. Aside from the speed-demons like Kirby, from what I understood two pages per day was a sort of penciller's minimum with Marvel. Anyone have any info?