If you don't mind something personal, I am home from the hospital after my prostate cancer surgery. I have quite a few steps to go through before I'll be back on my feet, but I am on the mend. I have appreciated the notes wishing me well. Thanks to all of you!

Postings through this week were done before surgery, so forgive me if I don't respond to comments.

All my best from your friend, Pappy 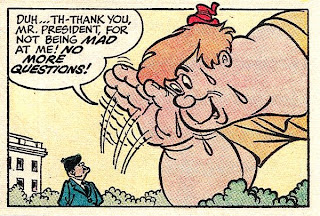 
I can hear the groans from you guys now...why am I showing a Stumbo the Giant story? A kiddie story? Well, there is a story behind the story. I didn't notice it until a few weeks ago, too late to post it last year around the 45th anniversary of the Kennedy assassination, but it has a connection. 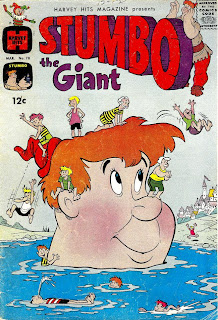 That means it appeared on the stands a few short weeks after the November 22, 1963 assassination, yet a caricature of JFK appears in the story. This is one of those things that publishers who work months ahead of time fear, that something will happen between the time their publication is prepared, and when it goes on sale. It was fairly atypical, too. Harvey Comics played it very smart editorially, giving their stories a consistency and timeless aspect. That way they could reprint a story in 1973 which was drawn in 1963 and their young readers wouldn't be able to detect a difference from any new material it might appear alongside. That wouldn't be true of this particular story because of the JFK caricature. I have no idea whether it was ever reprinted or not, but if it was then it was immediately dated.

Warren Kremer was an exceptional artist, and Stumbo was one of his best drawn efforts. I've always admired how he could keep things in proportion between the giant figure and his surroundings, including the tiny people. Especially considering he was working with the constraints of his 8-panel comic book page.

Kremer, who was born in 1921, died in 2003. In 1989 a stroke ended his drawing career, which up that point was extremely prolific. He was reported to be able to draw 8 interior pages a day, not to mention all the covers, promotional material, etc. For many people, Warren Kremer was Harvey Comics. 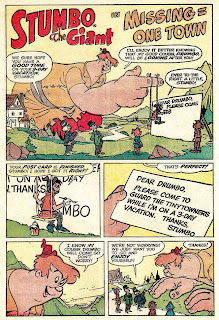 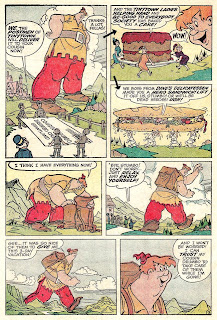 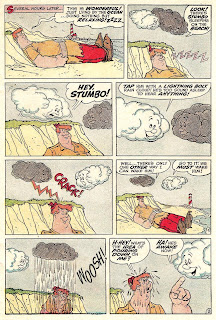 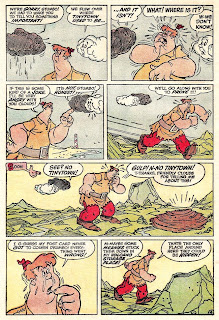 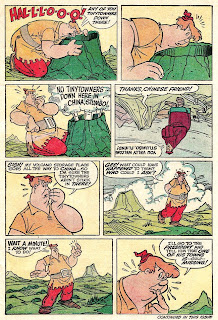 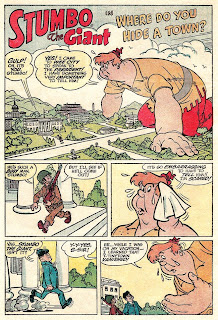 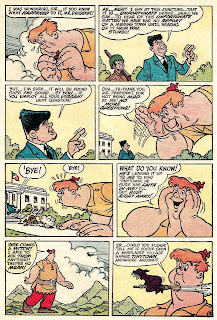 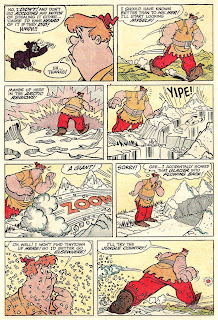 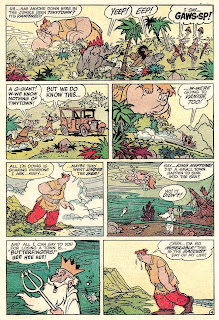 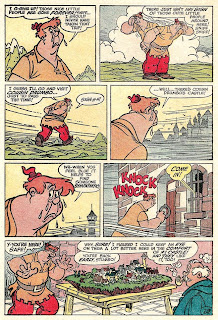 Hang in there,Pappy and best wishes throughout your continuing treatments.

When I went through six months of chemotherapy for Hodgkins Disease slightly over five years ago, I was very relieved not to have to undergo radiation treatments afterwards.

My cancer was detected very early, and thus far I'm in safely the clear, finished with scheduled check-ups, and fully in remission. I simply have to perform a routine, annnual physical to "eyeball" anything that might tail-gun me at this point.

Oh, and all of the Harvey Comics are simply awesome.

I really miss having stuff like this on the stands. Other than the Archie books, the closest thing to it,is DC Comics Looney Tunes & Scooby Doo.

Rest easy, paps. Love those Stumbo pages. Old sod seems to have a proclivity for reclining. You follow suit, there, old man!

I hope you get well really soon, pappy, I love your blog and the great comics you post!

I'm always happy to see Warren Kramer stories. I read an interview with Marie Severin, she thought Kramer was the best artist to ever walk through the doors at Marvel - but no one knew it.

A couple of months ago I went over to the Cartoon Art Museum in San Francisco to see an exhibition of original art from Harvey Comics. Boy! I was amazed at the smooth and precise inking - good stuff.

All the best for a quick recovery.

I hope you get well soon.

I've been reading your posts for some time and it was your work that gave me the idea of publishing portuguese comics on my blog, together with the original art that I own.

Stumbo was know here in Portugal because of the brazilian editions, in which it appeared as Miudinho, a joke about his size, because the word means little, and it is a diminutive, a kind way of saying the word, usually used for children.

It did'nt have his own title, since the stories were published in Brasinha, the brazilian portuguese name for Hot Stuff.

I'll keep saying it until you're fully recovered my friend--- GET WELL!!

Pappy: Long to late to chime in, but man, did Kremer peg JFK or what? - for us old timers who were there! You can just hear JFK's voice. wow. -- Mykal