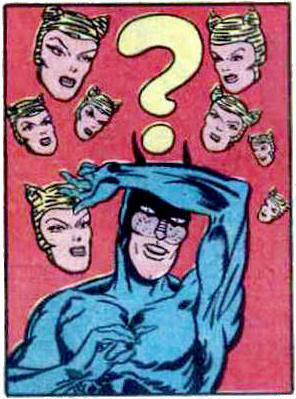 At first look I thought the art for this Wildcat story was by Joe Kubert. A closer look told me it was either not Kubert or someone inking over his pencils. The Grand Comics Database credits the artwork to Gil Kane, and it appears to be at least inspired by Kubert’s style.

Both Gil Kane and Kubert started work in the comics business early on when in their teens. They did the typical flunky work at first, erasing, drawing panel borders, etc. They both went to art school, and before long were drawing and inking. Kane had a reputation as an action artist, which is how I have always thought of him. The Green Lantern and Atom revivals in the early '60s are where I first saw his work. His style was perfect for superhero work, although he did the jobs he was assigned, no matter the subject.

Wildcat is a DC character whose Golden Age career spanned the first 90 issues of Sensation Comics. Not a bad run, but Wildcat, like a lot of other secondary characters, never got a star spot in those years. According to Don Markstein’s Toonopedia (one of my go-to references for many super characters of that era) Wildcat was a boxer who inadvertently killed an opponent, and was on the hitlist of the gangsters who put a poisoned needle in his boxing glove. Markstein writes: “Wildcat was the creation of writer Bill Finger and artist Irwin Hasen. Finger (rhymes with ‘zinger’, not ‘linger.’)” See what you and I both learn? I have seen Bill Finger’s name for years, but the pronunciation is a surprise to me. 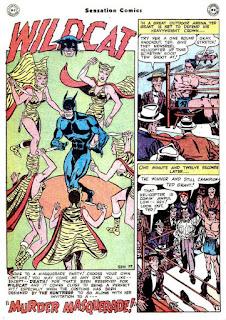 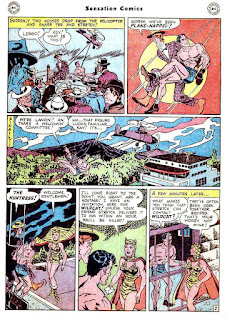 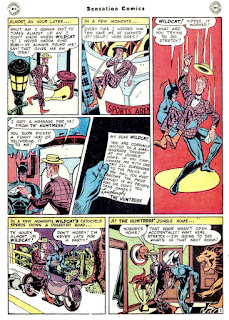 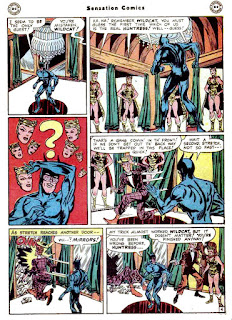 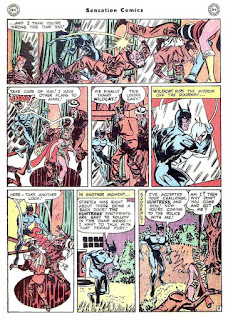 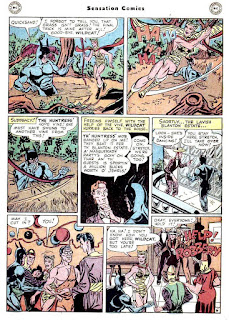 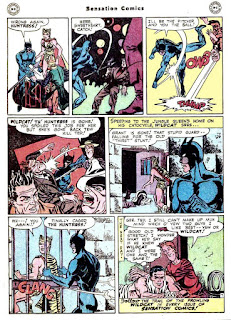 I have to say that Stretch seems dumb even for a Golden Age sidekick, and that's saying something. Jumping off a roof in hopes that Wildcat will catch him? Why not just walk into traffic?

The less said about the story itself, the better.

In the past, I've been struck by how the styles of Kirby, Kubert, Meskin, and Ditko had intervals of sufficient convergence that the viewer can at least momentarily wonder whether given work is by one of them or by another. I suppose that Kane too fits in this set. I've long wished for someone more knowledgeable than I to explore the topic of how this group of illustrators influenced or seemed to influence each other.

Oh, I failed to include Jerry Robinson.

Wildcat's origin (as seen in Sensation Comics #1)is quite the howler; when Ted Grant is born, his father--who does not seem particularly 'unmanly' in the single panel in which he appears--vows that Ted will not grow up to be an easy-bruising weakling like himself.

Ted spends his life training to become a fantastic physical specimen (instead of, say, studying medicine) but his up-and-coming boxing career is derailed when (to clarify Markstein's version) a pair of crooked managers rig Ted's glove with a drugged needle in the middle of a match. An accidental overdose kills Ted's opponent, who is also his best buddy and romantic rival (!!).

Ted is arrested, but the crooks decide to arrange an "accident" so he doesn't talk. Ted survives the car wreck, and while roaming the streets as a fugitive, comes across a child bawling because a big kid stole his Green Lantern comic. The boy explains the concept of the secret-identity mystery man superhero to Ted, who gives him a dollar for his trouble ("Gosh, now I can buy Flash Comics too!"). Ted promptly puts on a cat suit, tracks down the crooks, coerces a completely inadmissible confession out of the chief scumbag, and clears himself.

...and continues to dress up and fight gangster in his spare time just for kicks, eventually joining the Justice Society to fight alongside Green Lantern and the Flash.

A Wildcat story with Joe Kubert's art is reprinted in DC's Wanted--The World's Most Dangerous Villains! but the character got passed around constantly from one artist to another.

Not saying it isn't Kane but it doesn't look it to me although maybe it was inked by someone else. OTOH, I don't see any of his "tics" and they started practically from the first. That said, Kane did do at least one Wildcat story, reprinted in the early 70s, drawn under the name Gil Stack.
So who knows...

That splash page reminds me of the one from Batman #210, penciled by Irv Novick.