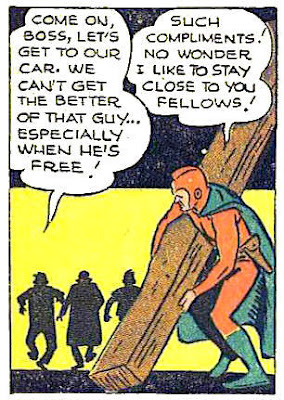 The impetus for showing this Starman story is the David Bowie son, "Starman," which is now an earworm due to a television commercial. I am hoping posting this will make the earworm go away. The story, which is the last Starman story, is from Adventure Comics #102 (1946). Superheroes were being cancelled after the war, because many of them were out of favor with readers. Oh well...Starman was a filler feature anyway.

Art is credited to Emil Gershwin. 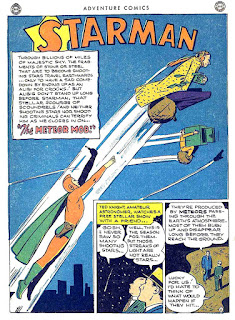 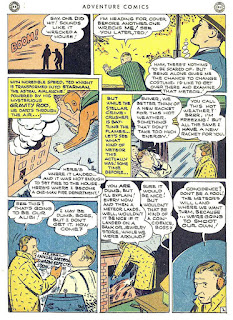 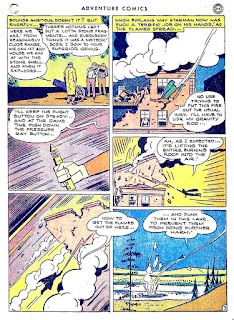 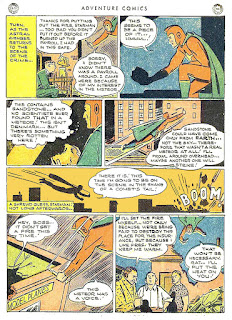 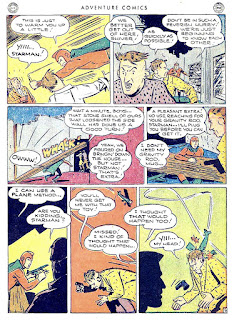 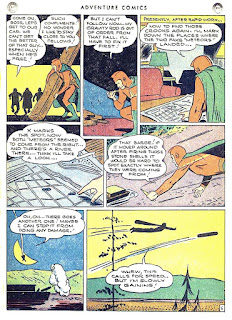 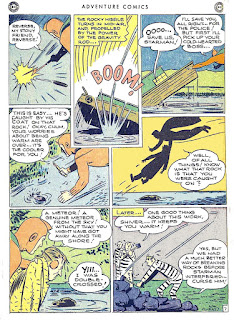 0The actor Ted Knight, best known for portraying Ted Baxter on The Mary Tyler Moore Show, did the narration and some of the voice-acting for four animated television series of the late '60s and of the early '70s adapting characters from the DC Universe. Sadly, no one involved was sufficiently well versed to have Starman make an appearance in any of these, and Knight died in '86. (Perhaps, though, great fans of Starman would not have wanted the character touched by Filmation or by Hanna-Barbera!)

The story here is pretty light-weight, as were many DC superhero stories in the late '40s. I appreciate the cleverness of the sandstone's revealing that the projectiles were not meteorites, but any substantial bits of sandstone would have disintegrated as the cannon was fired. And the story performatively contradicts itself by giving the projectiles inferrable paths.

Gershwin's art is serviceable, and I might otherwise enjoy it, except that, when I think of Starman, I think of Burnley's work, which was amongst the best at DC in the Golden Age.

What I find striking in Burnley's Starman stories is that the people and objects are very well drawn, but the compositions are generally barren. For example, furnishings in rooms are minimal. Combined with the tendency to set events in the night time, the results are quite surreal.

Wasn't Starman the cover feature before the Simon/Kirby Sandman came along? (This issue was also the last Sandman, thanks to the great Adventure/More Fun shuffle.)

Daniel (oeconomist), you should have written this post. You know more about Starman than I. I will look up Burnley's work. Thanks.

Daniel, I like the term "green Adventure/More Fun shuffle." It's obvious to me I am ignorant of a lot of DC Comics and their characters, mainly because they usually aren't available. They are not public domain, and there is no way I can afford to buy them.