Number 2544: The ghost who can be conked 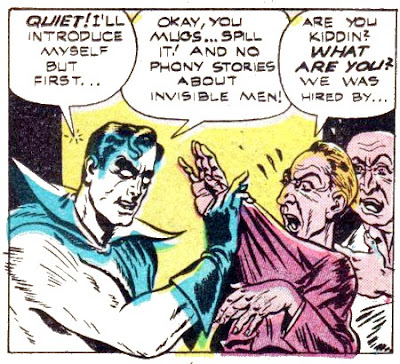 Public Domain Super Heroes says this about the character, The Duke of Darkness: “The Duke of Darkness was Paddy Sullivan [emphasis by me, Pappy], a police officer from an unnamed American city. When he was killed in the line of duty, Danny [another emphasis of mine] discovered that he continued to exist as an 'Earth-bound spirit.' He decided to continue fighting crime as the Duke of Darkness.”

The bringing up the two civilian names of Duke of Darkness (from his former mortal existence, of course) is because at the bottom of the entry for Duke of Darkness the anonymous writer for PDSH says this: “Many sites state ‘Danny’ as the character's real name however, this [Danny name] never appeared in a public domain story.”

Tsk tsk. Looks like some editing is needed. I depend on that site, so I'm just giving those fine folks at the PDSH a friendly heads-up.

It wasn’t like the Duke of Darkness set any records for longevity. He made but a few appearances and then was gone. Each comic book he appeared in had a different name, and each lasted one issue. I am supposing my old theory that they were published by someone who sold (or used) their paper ration at the end of World War II to cash in on the comic book market. Finally, the Public Domain Super Heroes site gives us this final note: “Even though he's a ‘ghost,’ he is able to be knocked out by a bump on the head such as in his first adventure.” Maybe there is a learning curve, watch your head, for people finding out they have died and are now a spirit.

Created by Sam Cooper and John Giunta, and presumably written and drawn by them for this first Duke’s story from K.O. Komics #1 (1945): 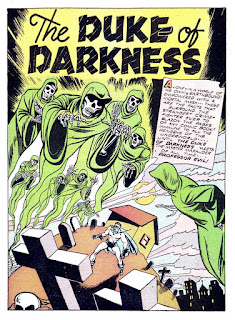 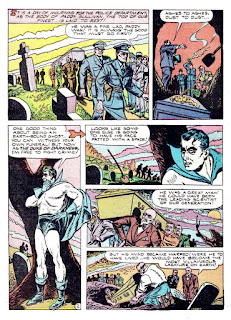 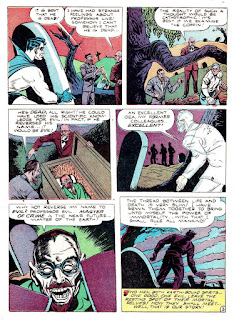 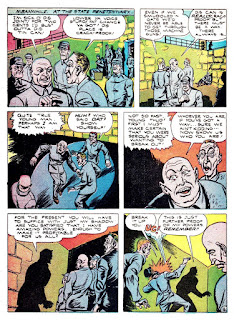 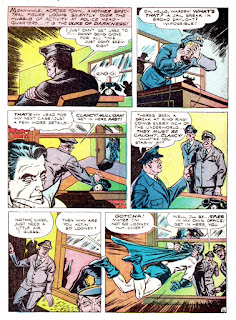 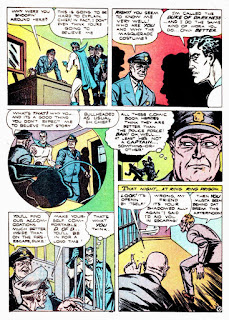 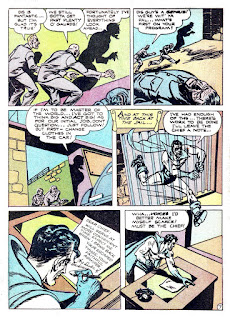 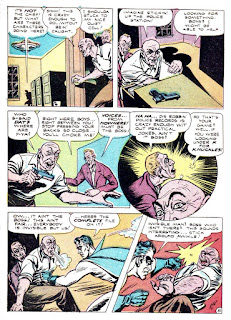 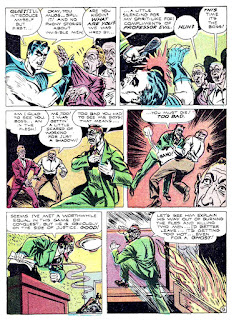 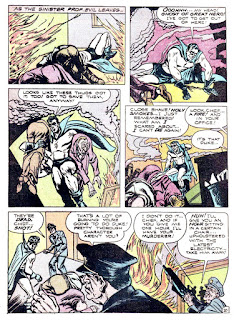 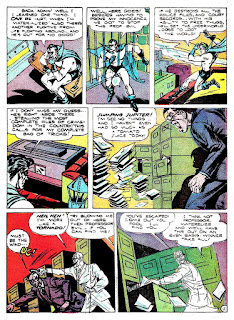 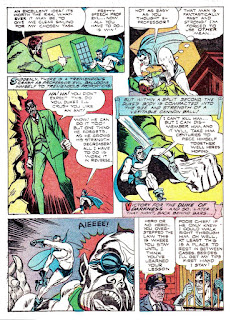 Will Shetterly said...
This comment has been removed by the author.
2:43 AM

Just what was Professor Evil expecting the authorities to do to his ghostly adversary?

Someone ought to produce one of these stories of spectral heroes and villains, with the added twist that everyone killed in the story returned as a ghost.

Thanks for this! I really want to find his other appearances. If this is his origin story, it's gotta be the thinnest I've ever read. The ghost storyline naturally has been used before, but this is pretty entertaining, "Well, I guess I'm an earth bound ghost! Might as well fight crime!" Lol.

I got a kick out of page 6, where the cop is fuming about "these comic book heroes" always thinking they're better than the police. "At least he's not a Captain something or other!"

Hi! Long time reader, first time commenter here.
In regards to the ambiguous listing on the Public Domain Super Heroes entry for The Duke of Darkness, all they would have to do is read this first story that you've reprinted. The character is referred to both as "Paddy" and "Danny."
Because, y'know, everyone confuses those two names.
Cheers!

zatoichifan, thanks for the correction. I could probably use an editor because I have made my share of slip-ups. But then, an editor might want money. Forget I mentioned it, and thanks again.

Smurfswacker, a little wink-wink humor from the writer in there. Originally I was going to mention it, but you obviously didn't need me to guide you to that inside joke.

RickH, yeah! He could probably have decided to haunt houses, and being a hero was more acceptable.