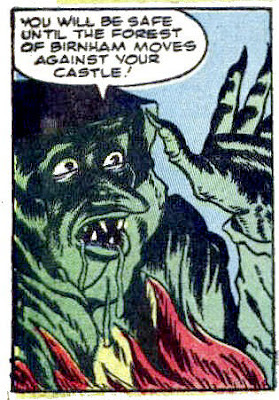 Note to students: do not use this Shakespeare story to write a book report. Just thought I’d warn you. The story does hit some high points of Macbeth’s plot. The ending was made to fit a horror comic (as is explained in the splash panel), but not exactly what I would have expected. A better ending for me would be to have all of those of Macbeth’s assassination victims come back from the dead and go after Macbeth.

Charles (Chuck) A. Winter drew “Fire Burn and Cauldron Bubble” in a definite horror-story style. Lots of dark panels with heavy shadows, lots of work on evil grimacing faces, too. Winter was a guy who entered the comic book business by working for the art shops of Harry “A” Chesler and Jerry Iger. He also freelanced. Chuck Winter was born in 1896, and when he drew this story he’d been in Ye Olde Comick Booke business since 1938. I remember seeing his work in DC Comics of the early '40s, and the list of publishers who had used his work is fairly long. He appears to be an artist who dropped out of the industry after a while, and his biographical information ends right about then. I don’t know what he did after comic books. He died in 1967, age 70. 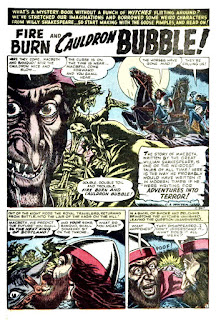 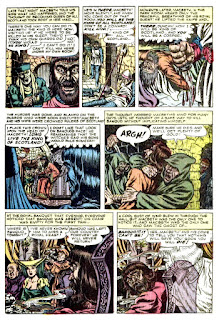 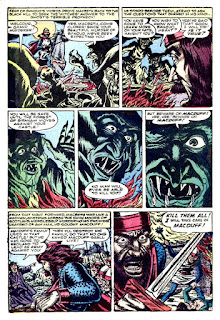 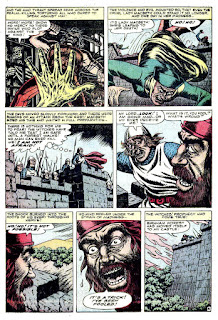 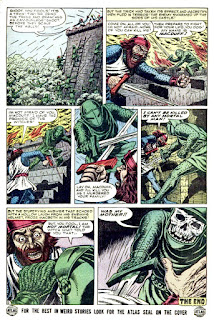 Man, passing that kid through your wizened witch "canal" with that big boney skull had to hurt!

The art is great on this, the witch close-ups is great and the skeletal knight is really entertaining. You could almost always depend on Atlas, if the story was poor, the art would lift it, and vice versa.