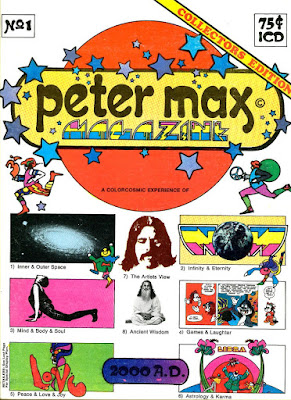 Peter Max was a pop artist of the late '60s who got a lot of attention from the press. I bought the first issue of Peter Max Magazine which came out in 1970, not for Max, but for a story drawn by Wallace Wood, which on the last page is mostly done by Max.

I don’t have much of an opinion of Max’s art, because most of it, especially during his ’60s fame, seemed more popular in the public mind because of its tie-in with psychedelic drugs. Max kept up his career long past those psychedelic times.

As a bit of biographical information, Max was born Peter Max Finkelstein to a Jewish family in Berlin, Germany, October 1937 (the family got wise and left Germany when Peter was one year old). I also read that Peter Max now has dementia, and I have nothing but pity for anyone with that condition.

Wallace Wood (and his assistants of the time) did a very fine job on the artwork for “Mister Mouse Meets Peter Max,” so I would have been happier with a magazine devoted to Wallace Wood. But we don’t get to choose what catches the attention of the public. 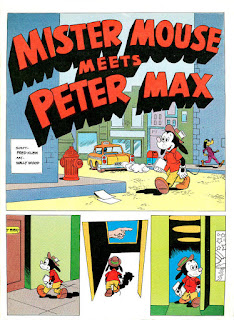 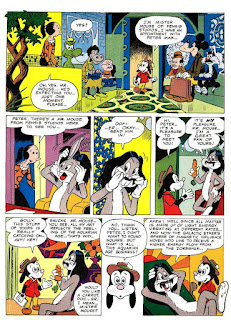 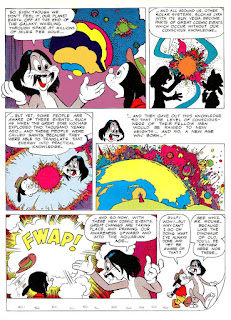 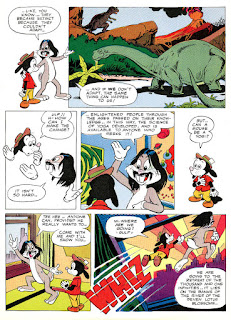 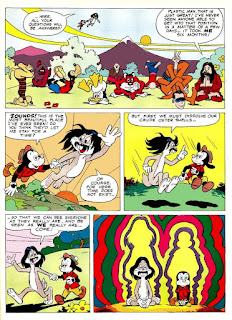 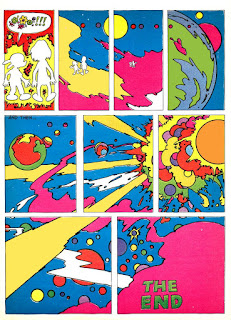 I would love to know what that green animal in the waiting room with a yellow hat, cigar, and scowl is supposed to be.

Psychedelic art drew on various antecedents, including art nouveau, surrealism, and cartooning of the early '30s (stuff such as Sterrett's Polly and Her Pals and Fleischer cartoons). Peter Max seemed for a time to be heavily influenced by that cartooning; and, to the extent that he was, I enjoyed his work. I lost interest as he moved in the direction of pop art.

This story with Wood is simply disappointing.

Bill, that green animal is Albert, from Pogo, by Walt Kelly.