Number 2538: Captain Hornet gets a buzz from Flag Man 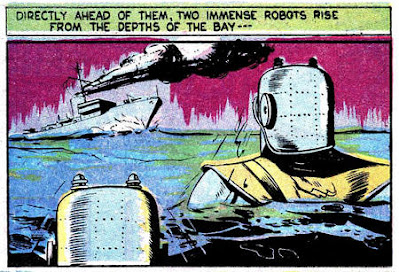 How many patriotic costumed heroes were there in the early days of comics? Well, quite a few, anyway. Some characters that came after the staggering, roof-raising sales of Captain America Comics (by Simon and Kirby) their publishers of the patriotic goodguys wanting to have lightning strike twice. That is where I think Flag Man fits in. I like his non-Flag Man name (Captain Hornet...maybe he stung his opponents.) The Public Domain Super Heroes page on Flag Man has this information:

“Captain (later Major) Hornet, Aide to the President, became a costumed, super-strong, killer vigilante known as Flagman [sic]. He fought the enemies who could not be dealt with by military regulations or the law. He was active both on the home-front as well as in the South Pacific against the Japanese.”

They go on to explain his bona fides for being a super hero, without super powers:

“Flagman was an agile and skilled fighter and capable of feats of strength, being able to bend prison bars with little effort. He was assisted by his sidekick, Rusty. Flagman drove a green ‘super-car,’ which was capable of high speeds.”

Flag-Man lasted in the first 14 issues of Captain Aero, and then got in his green super car and left the comic book business.

This is the first Flag Man story from Holyoke’s Captain Aero Comics #1 (1941), drawn by Allen Ulmer and Ray Willner. 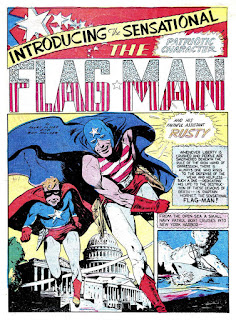 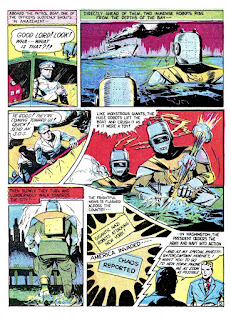 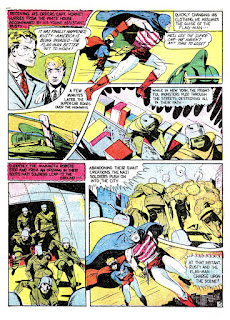 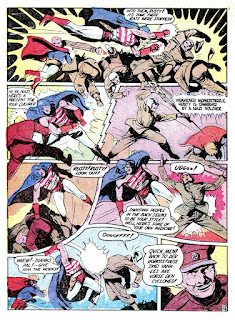 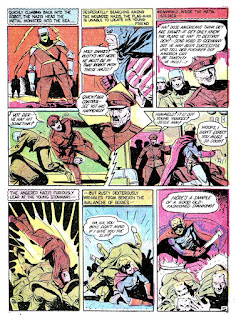 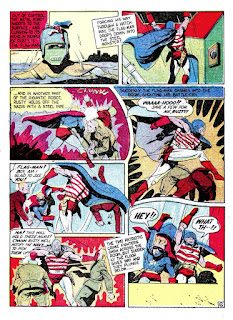 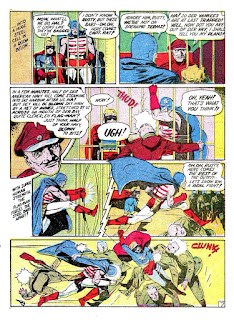 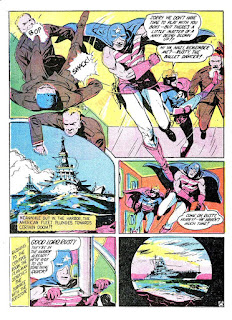 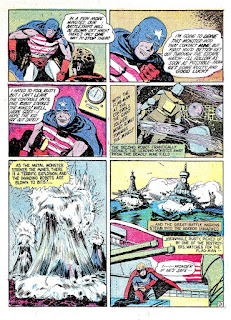 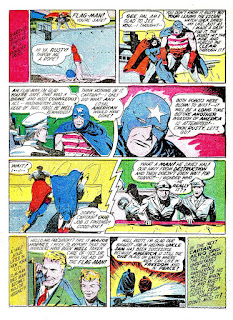 Lots to comment on with this one but I'll keep it to two.
First, I always enjoy these heroes who are introduced full blown. Not a hint of who, what, why or how he became Flag Man or who Rusty is and how he became his partner.
Second, you really have to hand it to those Nazis. Not only do they create giant robots capable of walking submerged across the Atlantic Ocean undetected (apparently) they also took the trouble of tailoring gigantic uniforms complete with jodphurs for them.
It's a good thing that the Nazis were only able to build two of these things. Kind of like the US only having Fat Man and Little Boy I suppose.

It makes great sense to deliver dialogue in the language of the audience, even if supposedly spoken in some other language; and, in audio delivery, it makes some sense to signal with an accent that a different language were used. But things start to get silly when an accent is used in print, though the evolution is natural. (Things are still sillier if a broken English is used).

Captain Hornet, losing sight of Rusty, concludes unreasonably that he must have boarded a robot. Another possibility was that Rusty were submerged and drowning or drowned.

The political right often embraces practices once championed by the left, with no thought to the origin of those practices; and the left is often glad to believe or to pretend that it had nothing to do with them. Now-a-days, it's a share of conservatives and right-wing populists who wrap themselves in the US flag, but from the late 19th Century through World War II it was first the “progressives” and then the New Deal coalition who did so. This story is one of many illustrating that wrapping quite literally.