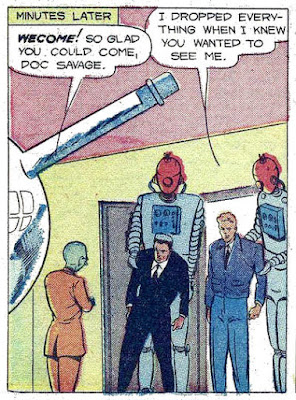 The Street & Smith publishing company was founded in 1855 by Francis Scott Street and Francis Shubael Smith. Over the years they published low cost periodicals and pulp magazines. The company did well for itself with characters like The Shadow, Doc Savage, and Nick Carter. Both The Shadow and Doc Savage were created in the Depression years of the 1930s, but Nick Carter was created in 1886. The Street and Smith comic book line was published from 1940-1949, featuring The Shadow, and in the case of today’s postings, stories featuring other famous characters, Nick Carter and Doc Savage. Besides the Shadow, Nick Carter also had a radio program, as you can see by the ads plopped into the story.

Despite the artwork of Bob Powell and his assistants, I think Street & Smith didn’t do much with Doc Savage and Nick Carter. I wonder if the writer who wrote the scripts even read any of the dime novels or pulp magazines featuring the two characters.

These two stories, from Shadow Comics Volume 8, Number 9 (whole number 93, 1948) seem like filler, which is how I feel they were conceived. I like the robots in the Doc Savage story, and I like the girl who knows how to throw a punch in Nick Carter. Otherwise it doesn’t appear that Street & Smith was treating such legacy characters, whose dime novel and pulp magazine appearances had helped keep Street & Smith in business for years, with the respect they deserved. Oh well, I can imagine what someone in the editorial office probably said, “it’s only comic books, so who cares?” 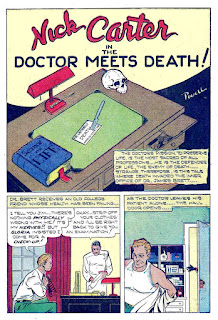 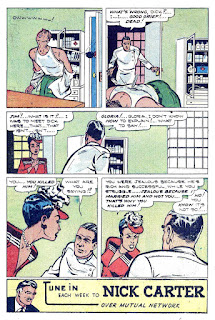 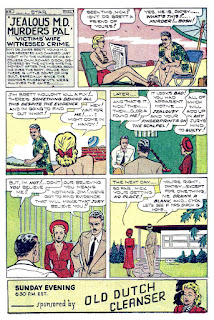 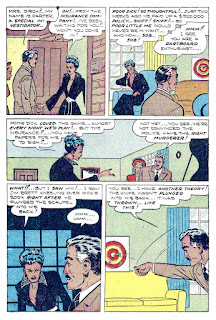 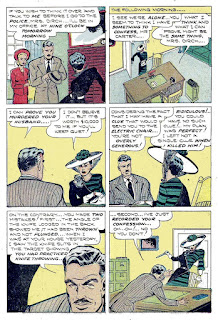 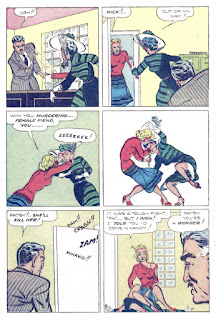 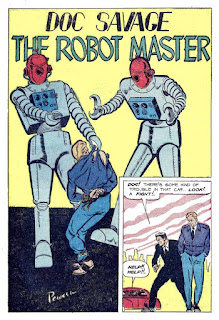 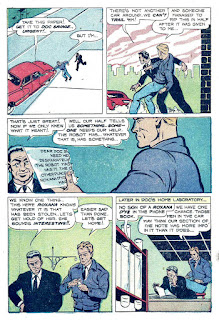 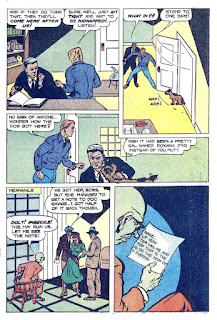 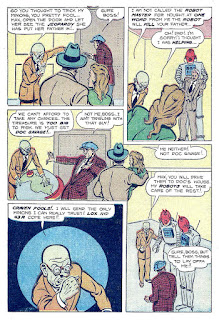 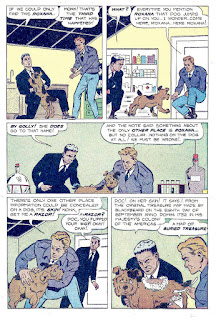 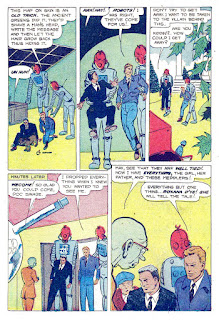 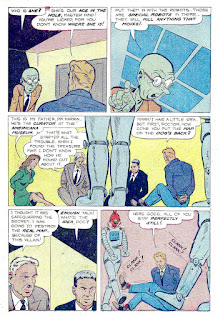 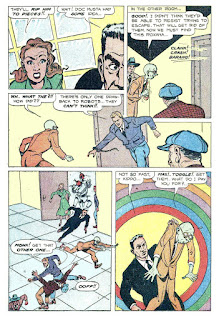 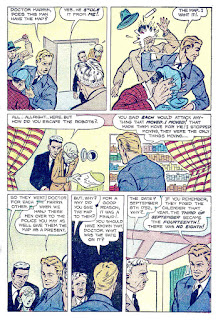 As a teenager, I saw Nick Carter mass-market paperbacks on the racks, so it was quite something to see the picture of a cover of a Nick Carter dime novel, and to discover upon investigation that the character had been repeatedly reworked. I've been rather hoping that it would happen again, though I admit that I've never read any of the stories, now excepting exactly that which you've shown us here.

On the other hand, I read quite a few Doc Savage stories. My father was buying all of them as they were reprinted from the pulps as paperbacks. Sadly, when I let slip that there would be twice as many as he had expected, he quit. In any case, I don't think that Doc readily lends himself well to comic-book adaptation. To be compelling, stories in which the central character is a superman who seldom emotes must do more with the elements that are not central. One of the ways in which the various Kenneths Robeson did this was of course by spending more time on the members of Savage's team, but readers and writers of comic books expect Savage to be front-and-center. The other way in which the Doc Savage pulps captured readers was with bizarre, horrific, or gruesome crimes and criminals; there would have been and probably still would be an uproar had these stories been delivered as sequential pictures. In fact, I think that they would have been far too strong even for radio.

Of course, I love the Powell-studio illustration. There was a span part-way through his career in which much of the work coming from that studio seemed like self-caricature, but this work seems to predate that span.

Daniel, I found a "modern" Nick Carter paperback at a thrift store so I bought it and read it. The series of novels were written by various authors who weren't identified, but the novel I read was long on action and short on plot.

I believe that the Doc Savage novels were popular because of the striking covers by James Bama and others who were apparently told to use Bama's Doc as the template.

The 1930s writing style can bother me, especially when instead of using a real automobile brand name like Ford or Plymouth or whatever, writer Lester Dent would just describe a car like "It was a long, sleek car with plenty of horsepower." I guess there might have been a rule by the publishers not to give anyone free publicity.

The short comic book story can be forgiven for not throwing in the repetitive parts of every Doc Savage novel, by describing Doc's two hour exercise sessions and even exercises of his brain. By the time I had read two or three of those I would just skip those parts.

The transmogrification of Nick Carter from PI to James Bond clone in the '60s can be blamed on Lyle Kenyon Engel, a book packager who bought the rights to the character from S&S, then hired several anonymous scribes to crank out the books. Engel also produced John Jakes' "Kent Family Chronicles."
James Bama did do some fine cover art for the Doc Savage reprints, though I didn't care for the helmet-like hair. Bama used Steve Holland (who played Flash Gordon in the German-filmed '50s TV series) as a model.

I forget who pointed this out, but someone opined that Doc grabbed a lot of sixties readers because he walked around with a small arsenal under his clothes, not unlike the movie version of James Bond. Another possible influence: Monk and Ham probably had some distant effect on two of the characters from Marvel's Fantastic Four, the often-quarreling Torch and Thing. The average reader wouldn't have known of the connection, but a reader of FF might have liked the backbiting Monk and Ham for the same reasons they liked Torch and Thing.