Number 2535: Origin of the Sub-Mariner 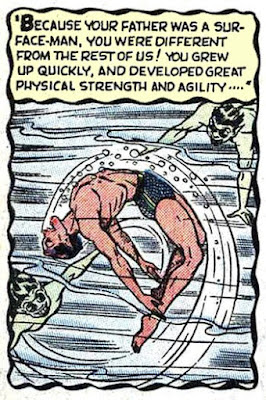 Sub-Mariner, also known as Namor, was born of a white American man, Leonard Mackenzie, and an Atlantean mother, Princess Fen. Fen was sent to spy on the depth-bombing Americans because she was the closest to looking like a white woman (and who was Fen’s mother?) Namor was what we would call today “mixed race.” His mom passed along the ability to breathe underwater (without gills), and for a real super power, keeping his hair sleek and combed while swimming in the ocean. The Sub-Mariner killed a couple of American divers, mistaking them for robots. Namor originally was a sorehead who hated America, but ultimately came around to becoming an ally.

Bill Everett created Sub-Mariner, one of the more original and popular of the very early super-powered characters of the comics. Sub-Mariner was canceled in the late '40s, only to be revived in the early '50s, also drawn by Everett. The story I am showing today is “The Origin of the Sub-Mariner” from Sub-Mariner #33 (1954). I don’t know if Everett wrote the story. 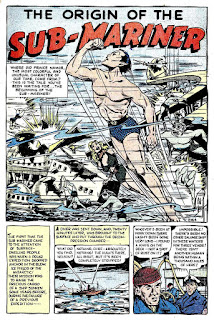 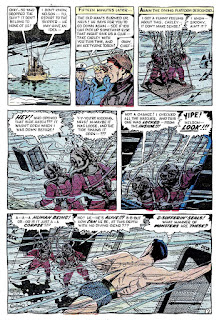 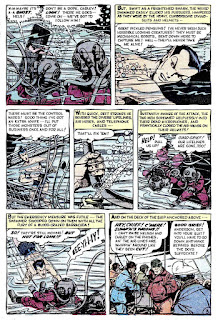 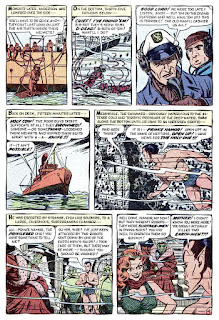 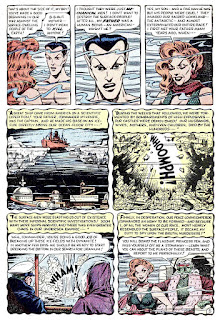 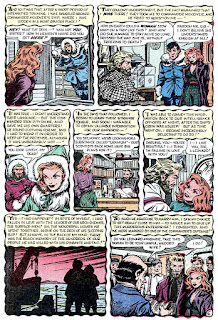 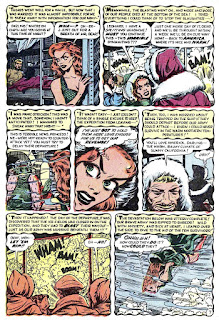 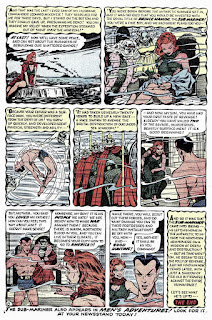 It's always so strange seeing Namor use expressions like "Great Pickled Penguins!" After having his memory restored by the Fantastic Four I suppose such expressions were beneath him. "Imperius Rex" is much more fitting for a true prince of the blood anyway.

I notice that Namor apparently doesn't have his nifty little ankle wings in this iteration.

Cold inhibits rust, and it wouldn't be a surprise if a knife left in Antarctic waters more than three years earlier had not rusted.

This telling is so close to the original that I suspect that Everett wrote it with some editorial direction.

The story has a huge plausibility problem, in-so-far as it should have been plain to the Atlanteans that the Americans were unaware of the presence of the Atlanteans, yet they sent only a spy and never emissaries.

Mom seems not to have aged well. Perhaps she drank like a fish in the intervening years.

Namor's ankles are shown only in the panel that you selected to highlight, and that they lack the weird little wings. The wings were reintroduced in a later story, explained with comic-book science.

The art is very good, but Everett had done and would do much better work. So I wonder whether his heart might not have been in this effort.

Interesting that Princess Fen has the same scaly green halter top & red hair as Mera, Aquaman's squeeze. 'Though I suppose it's really the other way around.

Rick, Daniel mentions the wings, also, and I admit I didn't notice their absence. Had I thought about them I might have thought they looked kind of stupid...too small, y'know.

M. Bouffant, ooops! Girlfriend takes on look of mother. Hmmmm. News to me, but then Sub-Mariner was not one of my favorite characters in the '60s when I bought Fantastic Four and Amazing Spider-Man religiously. I guess I was a partial Marvel fan, picky about which characters I followed. I also followed Captain America, but winced at those little wings on his headgear.

Daniel, one of the things said about Everett is he had a drinking problem. I think his drinking might have been great for when he worked on those horror stories for Atlas, not so for Sub-Mariner.

It was a good effort to bring back Captain America, Human Torch and Sub-Mariner in the '50s, but just too early. When the baby boomers (like me) became comic book fans and were just the right age to notice Marvel Comics the characters were handled differently. I never identified with Sub-Mariner (I nearly drowned when I was 11 y.o., and stayed away from large bodies of water from then on.) Spider-Man I identified with. I won't go so far as to say I wished I could have been bitten by a radioactive spider and gotten super powers, but the general fantasy of having powers to ward off bullies and enemies was good enough. As an adult I thought how genius it was to approach superheroes as Marvel did, and grow the line as its readership became more mature over the years.