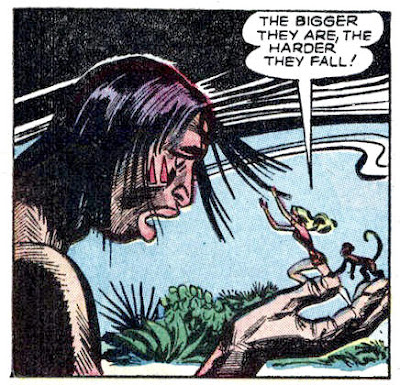 The Lost World is hidden from the rest of the jungle by some dense vegetation. Not so dense that Lorna, the Jungle Girl, cannot find her way in. As I read the story I was halfway expecting to see Professor Challenger, of Arthur Conan Doyle Lost World fame, but saw instead a man in a pith helmet who has trained the giants of the Lost World into doing his evil deeds. Since the story has only six pages, there isn’t enough space to have any suspense, but at least Lorna is nice to look at, drawn as she is by Jay Scott Pike. In Pike’s artistic life, while drawing  comic books, he also did illustrations for men’s magazines, and painted pulchritudinous pin-up girls, a la Gil Elvgren. 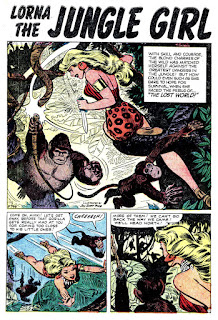 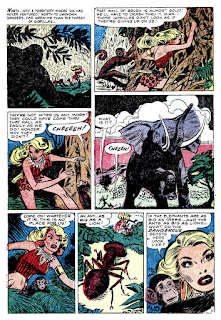 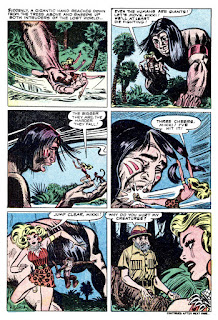 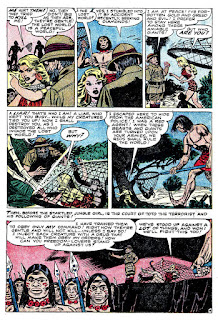 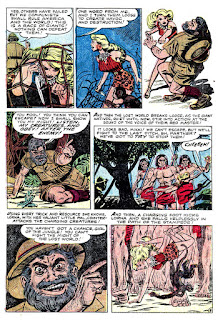 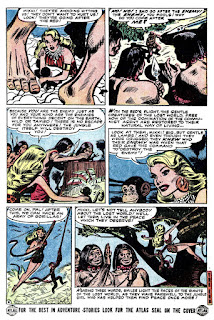 Thanks for giving Lorna some exposure (heh). These little tales are always a fun quick read, which is more than I can say for a lot of jungle girl strips.

So, Lorna freed herself from the net; knocked-down the Red; and then, instead of disposing of him directly, sought to battle him indirectly, by battling the giants.

Gene, there are jungle girls, and then there are jungle girls. Maybe we should have a poll on who are the sexiest jungle women. Of course judging women (and jungle girls) by how sexy they are would be sexist, which I am very careful with. So forget I said anything about polling...but just between you and me I think it's a tie between Lorna and Rulah.

I agree with Lorna and Rulah but would still put Sheena alongside them for a Triumvirate of-- uh, can't think of a good alliterative word for some reason. Oh well...