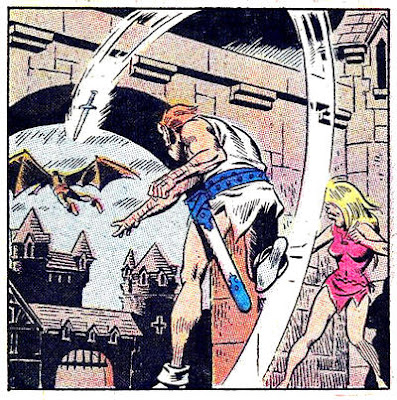 Wallace Wood was good at fantasy stories, as “Flight into Fear” shows. A teenager, Johnny, who has lost the use of his legs is transported to another world by riding a gargoyle that has come to life. Johnny then helps the people there get rid of a bad king. The best thing about fantasy is absolutely anything, no matter how unlikely, can happen. Wood used a series of events, which are more like a dream (or nightmare), rather than try to explain the reasons why such other-worldly happenings occur.

Like other stories Wood did during this time there are echos of Lord of the Rings. All comic books are one form of fantasy or another. The seven page story was produced for a Marvel title, Tower of Shadows #5 (1971), and of course Marvel and DC comics are fantasy factories.

There is also the self portrait of the artist, with a whimsical, but telling, look at his studio as a medieval dungeon. Wood conjured up fantasy, humor, science fiction, all parts of his signature — and life's — work. But from interviews he gave over the years he griped that drawing comic books was a path to poverty, and bad habits. Showing himself with a cigarette was telling. His unhealthy lifestyle had no fantasy way out for him except tragedy when, ten years from the time he was drawing this he took his own life. 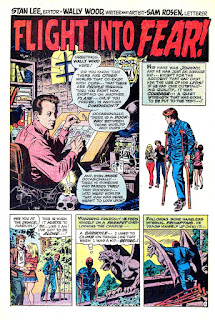 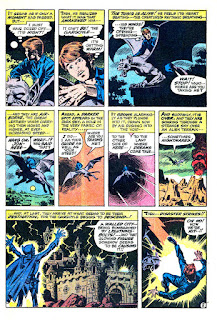 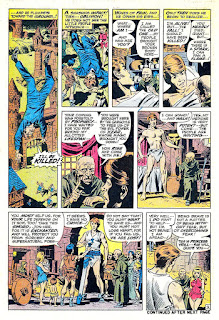 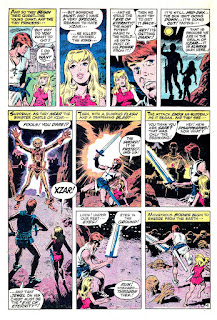 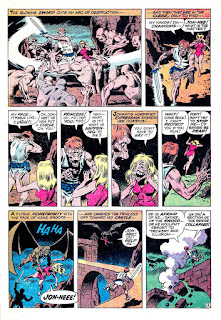 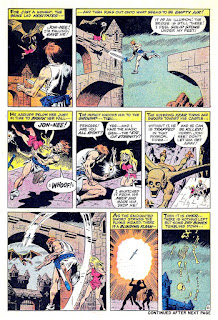 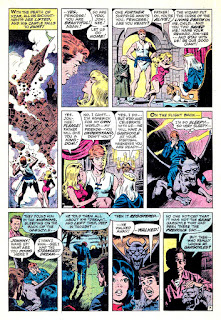 Ha! I actually had that comic book with that story in it as a kid. I don't remember the Wally Wood introduction, but the trip on the gargoyle, the small princess, and the friends surprised to see the hero walk away without his crutches at the end, it's all come back to me! Afraid the comic was thrown out long before I reached adulthood. Imagine seeing it again here!

The illustrations are of course well executed, though Wood did still better work on other stories. (Wood drew rather a lot of lizard-like humanoids over the course of his career.)

The story itself is something of a fairytale, which is fine.

I don't see homesickness as a particularly good motivation for the main character to return to his previous world. But the CCA might have had an issue with him noting the general lack of women of suitable size.

The hair-style of main character put me in mind of some pop-singers of that era and of Milorad (“Rod”) Blagojevich.

Tolkien's Lord of the Rings wasn't a big hit when it appeared in the middle 1950s. Then, when Donald Wollhein at Ace Books published unauthorized paperback versions in 1965, the resulting controversy made the books (and the resulting authorized Ballantine paperbacks) fanous.
A lot of the science fiction that Woody illustrated had so little science that it might as well have been fantasy, so I suppose it was natural he would segue into fairy tales.
Perhaps I'm misrememering, but didn't Woody commit suicide because he was going blind?