Number 2541: The Maker of Monsters 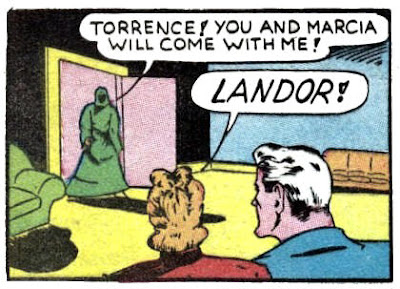 I have looked at Landor, Maker of Monsters a couple of times when going through early Speed Comics, but never stopped to read. I think I sensed what I later found to be true: as a monster maker Landor usually fell short of total success, and he would get his butt kicked for his efforts. Apparently Landor had at least one couple who would get rid of the monsters, Jack Torrence and his girlfriend, Marcia. You’ll see them in this episode.

Where are the villagers waving torches, like in Frankenstein movies and comics? Is there no one except Jack and Marcia who care that monsters are being produced locally?

Landor lasted for 11 issues of Speed Comics. The story today was apparently the last, appearing as it did in Speed Comics #11 (1940). The stories were fillers, and show it. The main interest for me is that Landor artwork is credited to Bob Powell. In this story I can’t tell if it’s Powell art or not. Maybe one of you without burnt cinders for eyeballs, like me, can tell me if it is Powell. 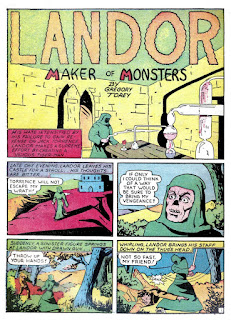 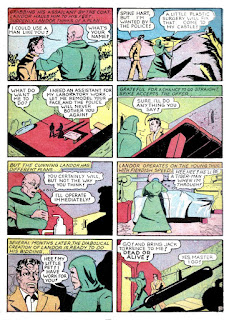 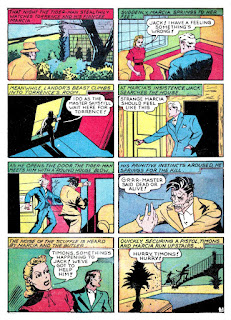 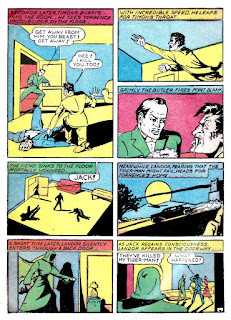 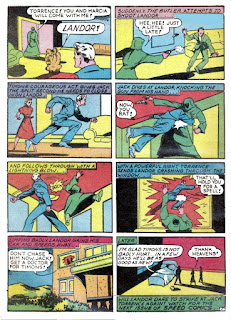 Thank Heavens Timons would recover! But, poor Spike! He wanted to go straight! And I'll bet that Landor escaped again at the end of the episode in Speed Comics #11!

This work is very inferior to some earlier work by Powell. That doesn't mean that he didn't knock it out, but I don't see anything that causes me to think it his.

Wow. That was some of the most pathetic monster making I have ever seen.

Sorry to hear your eyes are bothering you. My own eyesight got so bad some years ago that I gave up on entirely doing artwork and gave up on reading comics as well.

But I had cataract surgery in both eyes in 2019 and now I'm seeing better than ever. Starting to do artwork again.

As for identifying the artwork, I haven't read enough Powell to identify his style.

Daniel, if it was Powell he didn't do what he did through most of his comics career, sign his name. Looking at it again I don't see Powell's art, either. The Grand Comics Database says Powell. It probably deserves another look.

Mark, I had cataract surgery a few years ago, and the doctor had a problem with one eye, so when my eyes healed up I went in for a laser treatment.

I think my eye problems now would be caused by gettin' old. No cure for that. I'll add my arthritis, and a memory that is a sieve to my list of old age complaints.