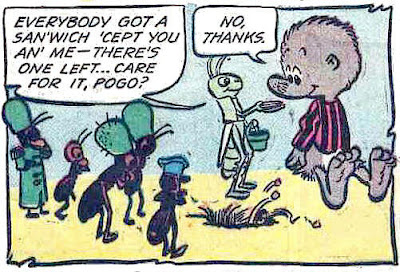 Walt Kelly did like many story tellers, using fables and fairy tales that go back centuries to tell a modern version. “The Ants and the Grasshopper” is a well known Aesop’s fable that promotes work during the season to get food, rather than goofing off on other things, and ending up with no food.

The fable, here from the Library of Congress, is harsh. We know the idea of gathering for future needs is practical, but come on...the grasshopper practices his violin. He asks the ants for food and they turn him down. Then they admonish him for not doing what he should do. But...we all need music, too, so they could give him a free lunch at least to thank him for providing background music. But no. Those ants aren’t handing out any love thy neighbor exceptions. They are hard nosed. 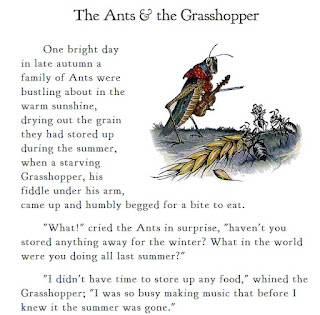 Pogo meets the actors in the fable, but Walt Kelly turns things around. The grasshopper is an indolent one, but the ants are the musicians. Pogo and his fellow Okefenokee Swamp critters don’t really work for their food. No, their job is to talk a lot and say witty things. In the usual Pogo story the food often comes from off camera, and as in the story, usually by guile rather than work. 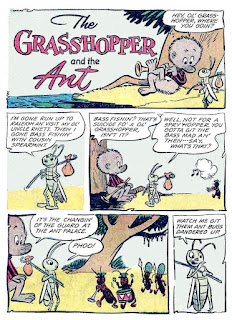 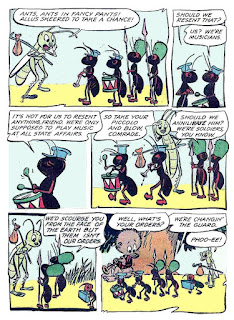 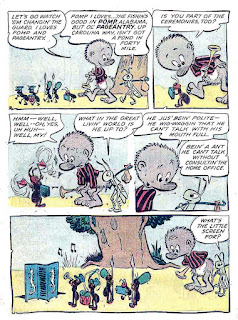 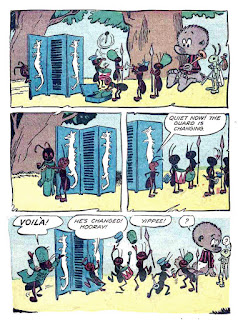 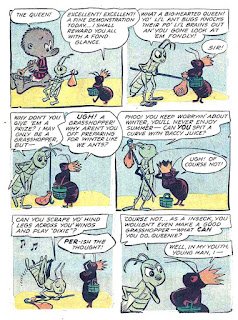 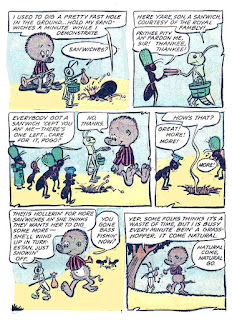 It's no surprise that, setting aside the early days, when Albert would try to eat Pogo or some other character, food is produced off-frame and not always clearly identifiable beyond being food. A problem with food in funny-animal comics is that, given the internal logic, meat would generally come from a being with personhood. (To this day, I am a bit appalled by what's sometimes shown on a spit or on a table.)

Speaking of sandwiches, I recently read of a supposedly scientific study that found (amongst other things) that one's life is extended by eating peanut-butter-and-jelly sandwiches. I regard the study itself as largely rubbish, but that conclusion is a happy one, and no animal (funny or otherwise) has to die.

I wanted to write this comment in feigned dialect, but I recalled how doing that generally annoys you. I didn't want you to have to eat an extra peanut-butter-and-jelly sandwich to offset the effects of such annoyance.