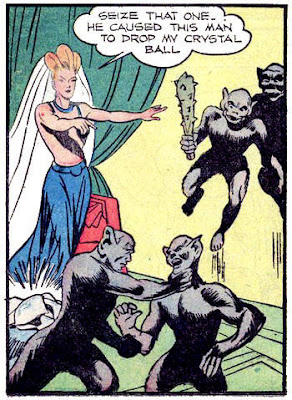 Weird Comics is aptly named, or at least as far as is shown in this chapter of the Sorceress of Zoom series. The sorceress has her own magic city, which she can send anywhere. That sounds good. Why travel the old fashioned way, airplane, car, horse-and-buggy, if you could just take your home and city, and plop it down where you want to go?

Toonopedia’s Don Markstein says of the Sorceress of Zoom, who appeared in the first 20 issues of Weird Comics, that she was a villain who later became a hero, but more of “an ambiguous hero like Sub-Mariner.” Would you trust anyone who was described as ambiguous? Not me.

The article also says the early adventures were drawn by Don Rico, and he may have created the Sorceress of Zoom. It appears the history of the feature is also ambiguous. 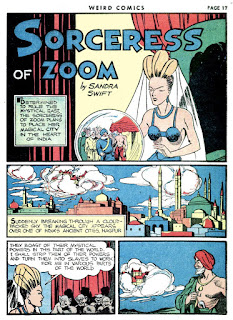 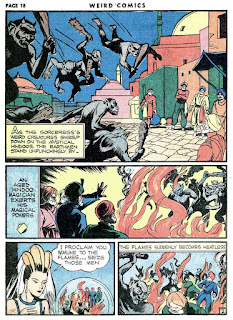 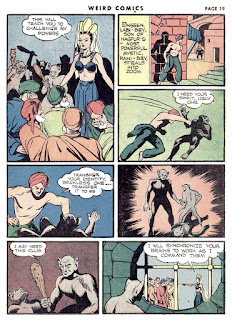 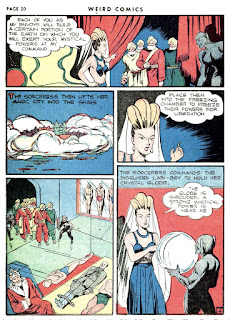 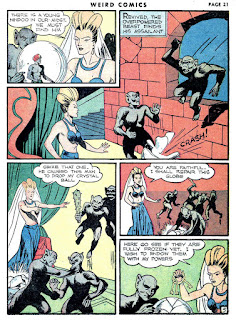 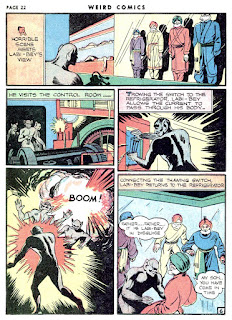 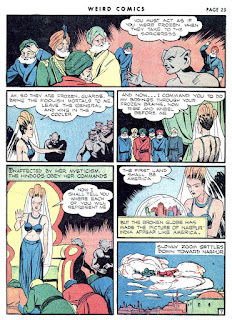 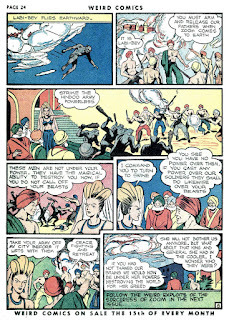 A tale as old as time. The Sorceress reminds me of the Empress of Eilerua from Al Stenzel's Space Conquerors!, a fun little serial strip that ran in Boy's Life Magazine sporadically throughout the '50s, '60s and early '70s, written & drawn by George Evans, Lou Fine, Gray Morrow and others over the years. The Empress was also an "evil" ice queen who eventually joined up with our heroes and ultimately settled down with one of the crew in the finale.

If interested, Planet Tom has an index (with commentary) that leads directly to (almost) every strip, and all Boy's Life content including other great comics, via Google Books.

"The Sorceress of Zoom" was such a delightfully screwy series. Every episode seems to have been written by a different writer with a different idea of what the series was about. She was bad, she was good, she was stalking a hapless mortal and putting spells on his girlfriend, then she wasn't, and so on. The art wasn't quite as erratic, There were a couple of standout episodes but mostly the drawing was simply lousy. The series is such a mess that I can't help but like it.

Beautiful, powerful, seemingly ruthless villainesses who are reformed or otherwise made sympathetic over fictional arcs are quite common. Haggard's Ayesha is an extreme case. These imagined women are expressions of the anima — a construct of characteristics complementing the manifested characteristics of their creators and of much of the audience — and the evolutions of these fictional women accommodate the attraction to the anima.

In real life, you're wise to be cautious of femmes fatales, especially as a heterosexual male.

Daniel, it isn't me being cautious around femmes fatales, it is the femme fatales who want nothing to do with me.

Of course, if a femmes fatale did approach me I am too old and tired to run, so I guess I would just have to give up and let the femmes fatale have her way.

BillyWitchDoc...I loved those comic strips from my time reading Boys Life in the mid to late '50s. Its been so long I am weak on the details, but it might be fun to to go back and see if I could spot the artists you name. A couple of years ago I did go through the internet compilation and the magazine was actually better than I remember it as a kid.

My parents subscribed to Boys Life for me, but I didn't think to keep any of the printed magazines, and if I had tried my mom would have tossed them in the trash incinerator anyway.

Smurfswacker, you may have guessed correctly what really happened to the strip. Different writers, maybe no ideas passed from editors. It is the way I visualize the world of comic books in their earliest days. A stricter outline of who the character was or was supposed to be went right over everyone's heads. Why not? Who read these things anyway? Kids! No need to be strict with a character when deadlines approached and the youthful readers probably didn't care much about the character, anyway.

Perhaps in a sexy way, which would have been my reaction as a boy, but not for details and/or stories.