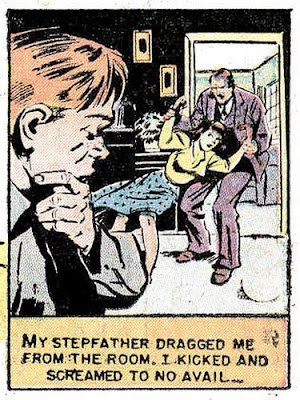 This story, from Avon’s Realistic Romances #16 (1954), is reprinted from Romantic Love #6 (1951). It is anti-marijuana, which was the vogue in drug stories of the era. The lovely Claire is led into marijuana addiction, saying, “I lost popularity with all the boys at the school! Before I knew it, I had the habit...with all the evil consequences.” Later, she ends up behind bars in a mental hospital. She is shown a woman who is completely gone from smoking the devilish weed.

Need I say it? This is a love comic. Love wins out, and Claire finds her happily ever after.

I chose this both for its cautionary tale, circa early '50s, and the artist, Everett Raymond Kintsler. Kinstler went from the comic books and pulp magazine illustrations to become a highly regarded portrait artist. Kinstler is deceased now, and his history of portraits of several presidents of the U.S. is well known. He also regarded his early work in comics and illustration as being part of his artistic growth. 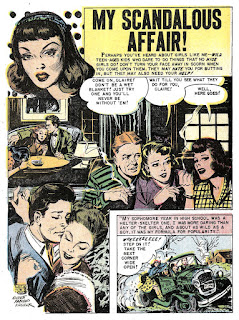 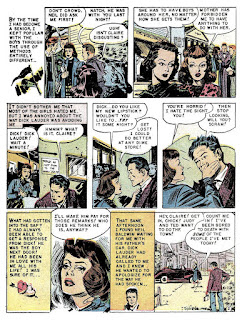 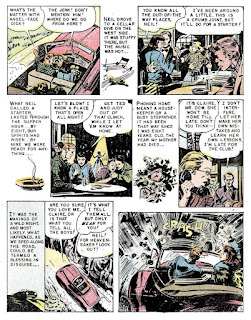 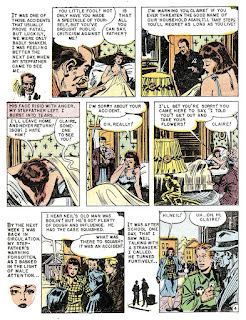 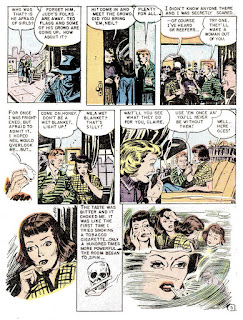 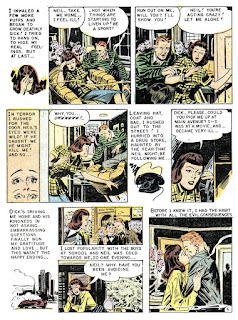 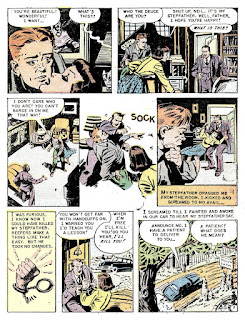 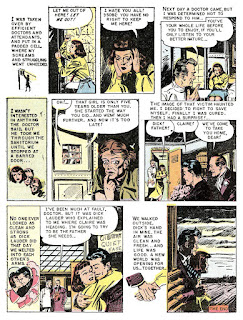 Like many economists, I see drug prohibition as wretchedly bad policy. And, like a huge share of the population, I'm acutely aware that the effects of marijuana were grossly exaggerated in the early and mid Twentieth Century. But there is at least one class of people who should never use it — those with disorders of the C4 gene. Marijuana can worsen schizophrenia, schizoaffective disorder, or bipolarity, and can tip someone with a propensity into expression of the disorder. Also, because marijuana can affect brain development, those without these propensities should none-the-less avoid experimentation until they are in their late twenties or older. Of course, few young people will heed such advice.

(My personal choice always was and remains to avoid recreational drug use.)

One aspect of this story that's fairly realistic is that of a transgressive adolescent female from a rich family being dragged-off to a mental institution. She'd be fairly lucky in a case such as this not to be given a frontal lobotomy, which was Settled Science™ in 1951.

Kinstler's style is very consistent across all of his work that I've seen, whether in comic books or portrait painting. I note that his portraits tend towards flattery, depicting people as looking better and more approachable than in photographs.

Kinstler was smart. Most people have a self-image and often they don't like how someone else sees them as they really look. Portraitists are better off with some flattery.

Peter Hurd did Lyndon Johnson's portrait and the story goes that Johnson called it "the ugliest thing I have ever seen." LBJ was having a bad day when he first saw it, and later denied he'd said it.