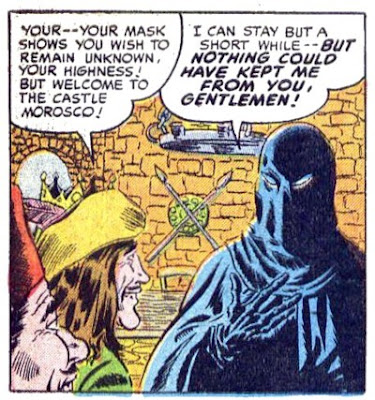 “Circle of the Doomed” tells of four deposed kings, who have been banished to an old castle. To amuse themselves they hunt down people and kill them. Jolly good fun, that! They are certainly showing that getting kicked out of their own kingdoms by unhappy peasants was justified.

I believe this is yet another story about hunting humans that is inspired by the 1924 classic tale, “The Most Dangerous Game,” by Richard Connell. That story has been very popular and influential for almost a century. In this comic book version the tables are turned by an uninvited guest, who wishes to join the clique in their murderous ways. 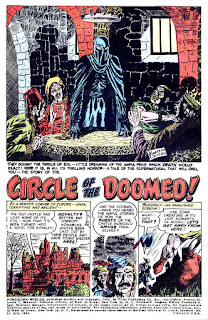 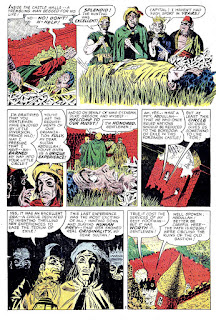 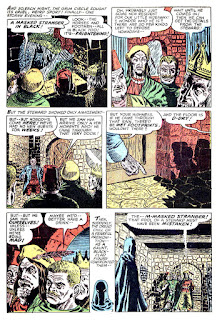 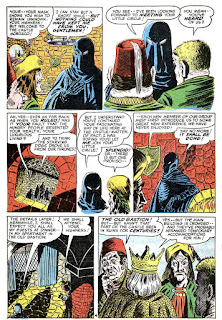 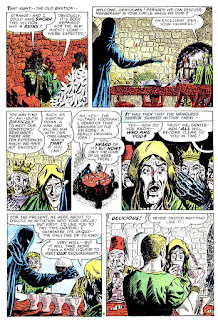 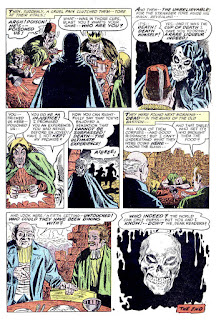 The last panel of the first page has a clear borrowing from the text of The Most Dangerous Game, in which the main character, having fallen from a yacht, swims towards sounds of shots, and hears the anguished cry of some creature dying in pain and terror.

In this story, each new member is supposed to offer some new entertainment, which implies that the hunt as such were something new, but we're not told what the previous diversions were. I suppose that it was regarded as too much work for the writer to invent something, but the story would have been much stronger with more said or insinuated.

I think this story holds a much greater irony.

It seems death got bored waiting for people to die and then came up with his own game!

How did they miss that EC-ish ending?

Daniel, I occasionally (every ten years or so) haul out my copy of "The Most Dangerous Game," which I first read in 6th grade. I still have the anthology from which I first read it. Being as how I was alternately terrified and excited by the story, I recognized it as the basis for The Phantom #1 from Gold Key.

Brian, I have no answer for your question. You and Daniel are always ahead of me. I guess my problem is that I read and post the stories anywhere from one to two months ahead. I forget them. And when I see them again I don't want to waste precious eyesight reading something I've already read.

Wow, what an excuse...I need to think up something better.