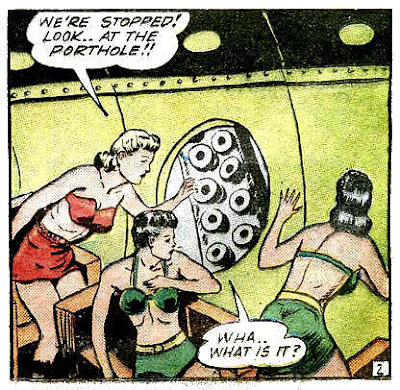 I would like to say that Gale Allen and Girl Squadron were inspirational to girl comic book readers of the World War II era, but...

...as shown on the cover (drawn by Joe Doolin), Gale is on a table in the much overused bondage pose that comic books loved. In the story the scene is repeated. As always, Gale and her crew are dressed in skimpy costumes. [Spoiler alert] she is also rescued by a male criminal who puts some moves on her when they are in his spaceship. Does rescuing her give him the right to sexually harass her? We talk about sexual harassment a lot nowadays. I can’t help thinking about how this older stuff looks to modern eyes.[End spoiler]

The artwork on the 6-page story is credited to Richard Case, who we are not to confuse with an artist who has the same name. There doesn't seem to be much information published about the Golden Age Richard Case. The current Richard Case did artwork for DC and Vertigo. 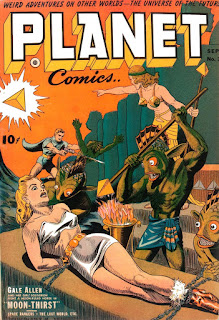 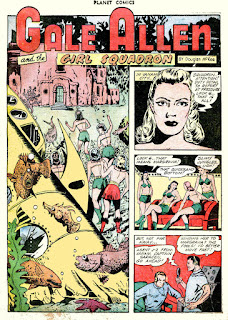 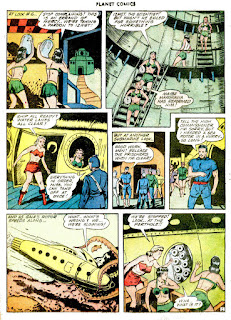 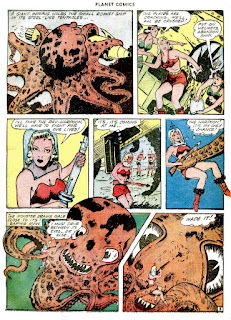 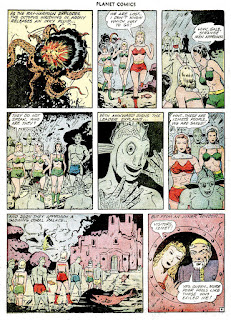 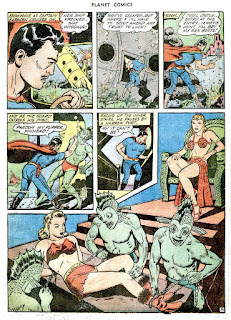 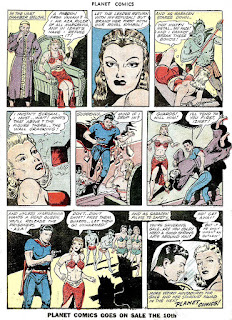 Well, that was manly!

1. Absolutely faces no opposition from anybody
2. Everybody around him is a hot lady (the scientist just ... disappears out of the story!)
3. Crashes through a ceiling with a witty remark
4. Pencil-thin mustache

I bet the paper that's printed on smells like cheap aftershave.

The diving helmets that Gale and her crew wear all seem to have some type of fastener on them. You can clearly see them on the corners at the bottom of the helmets. What exactly were these fasteners fastening to? Their bare flesh? Ouch!!

Gale and the captain have some history together. He also appeared in issues 23 & 24. One of the GirL Squadron kids Gale she's developing a relationship with him.
This was his last appearance.

I also like your remark about the paper smelling like a cheap aftershave. Even in this bearded era, I suppose some guys still use the smelly ones. Reminds me of my late dad, a salesman, walking out the door shaved and ready to face his clients. He could leave a scent that lingered after he left.

Darci, as always, you are very helpful. Thank you for the information.