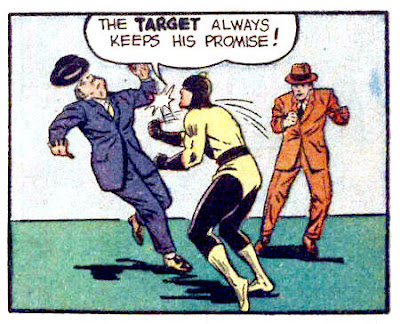 Target Comics was published by Novelty Press, part of the Curtis Publishing Company, which also published the popular weekly Saturday Evening Post magazine. I'm relying on memory, but I recall reading in Dr Fredric Wertham’s infamous Seduction of the Innocent that a retailer complained to him about having to carry the comic books published by a “slick” magazine publisher, or they would not get that popular magazine to sell. I assume it was, without naming, the Saturday Evening Post to which Wertham was referring.

I may have said before I think that Target is a bad name for a hero, especially with that target on his chest. Could a murderous crook with a gun pass up on the opportunity to make the Target a real target?

The Target story is credited to Dick Wood (as Dick Hamilton), writer, and artist Bob Wood. I have also read that Dick (Frankenstein) Briefer created the feature. 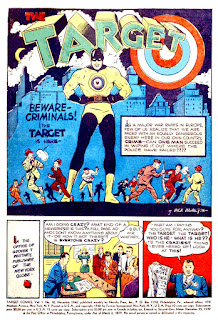 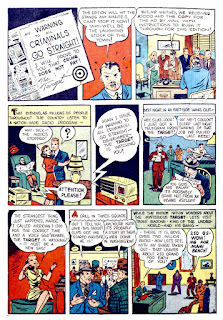 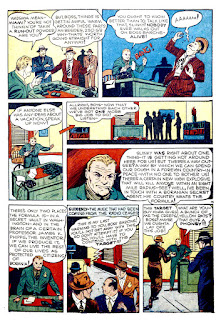 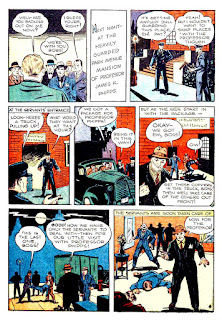 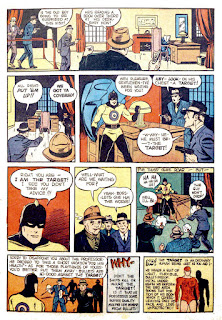 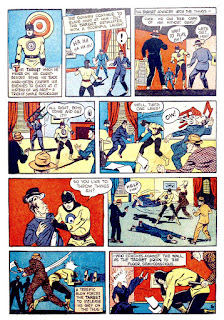 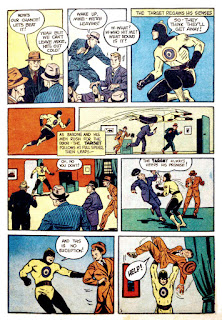 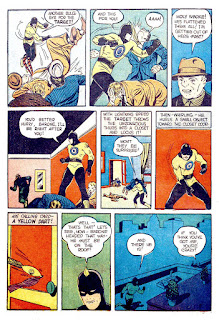 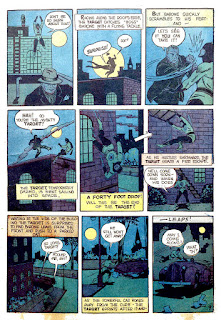 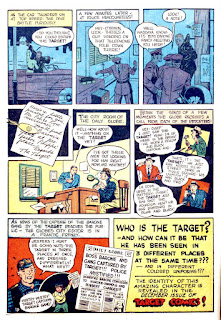 Of course, Bob Wood imitated the style supposedly of Bob Kane, but really of Jerry Robinson trying to be plausible as Kane yet better.

I can easily imagine Briefer creating the Target and Targeteer, but not being attracted to writing stories of the sorts to which they lent themselves.

Stories in which a mysterious protagonist seizes the airwaves to announce an approaching new order were in vogue for a while. I don't recall another story in which the hero seized the time-and-temperature phone number. (The time-and-temperature service was discontinued everywhere or nearly everywhere in America about a dozen years ago. Kids will no longer know the joy of writing “For a good time, call 555-1212” on a bathroom wall.) By the way, I believe that, in 1940, only New York City used seven-digit dialing for local numbers.

I automatically think of the economist Enrico Barone when I see the name “Barone”, but in this case it's probably meant as a substitute for “Capone”, with Barone plainly modelled on Enrico Bandello as portrayed by Edward G. Robinson in Little Caesar, see?

At least, in this story, the MacGuffin isn't some invention that exists exactly and only in a single physical instantiation that somehow can be duplicated if destroyed.

Fun entry. Just curious how the Targeteers were born now.

Neil, go back to February's postings. You'll find it there.

Daniel, thinking back, before I had a phone that told me the time I used the time of day number a lot. It was part of those things, including pay phones, that we lived with until the new revolution, then they all became obsolete.

Because of that, what I want to know is: Can I still call the Psychic Hotline to see what my future will be? Can I still call a number where a 65-year-old woman pretends to be 18 and describes how she'd "do" me?

And something else: We recently changed our car insurance, and found out that because my car is a 2005 model I do not qualify for roadside assistance in case I break down. It's a whole different thing, of course than a sex line, but at this point I need the assurance of someone showing up to change a flat tire or jump start my car more than I need sex talk.