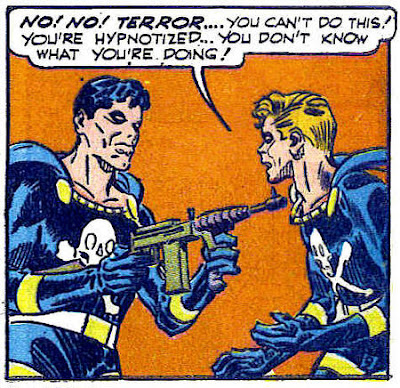 Lady Serpent is the evil wench who kills. She not only strikes fear in the hearts of her gang, but also the police. Sergeant MacGooligan has a “fierce headache” caused by the Lady Serpent busting out of jail. He tells the story of her escape to Black Terror and his young companion, Kid Terror, in their civilian identities as a pharmacist and a soda jerk. The prison break ends tragically because Lady Serpent guns down the prison warden and a police detective, which gets the Terror Twins, as they are called, into action.

Black Terror had a long run in the 1940s. I counted 127 issues of comic books where Black Terror appeared between 1941, in America’s Best Comics, Black Terror, and Exciting Comics, when Black Terror's run ended in 1949.

This story is drawn by the team of Jerry Robinson and Mort Meskin, and is from Black Terror #23 (1948): 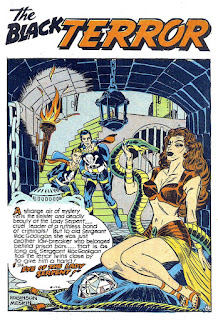 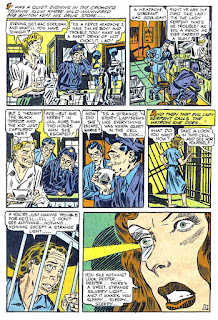 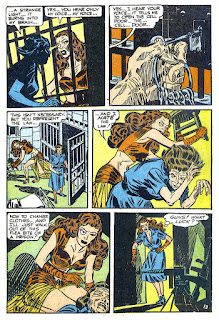 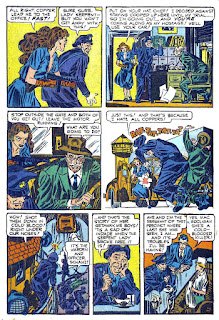 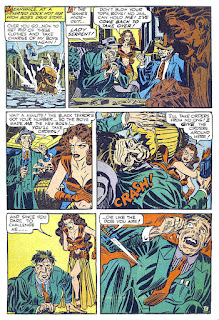 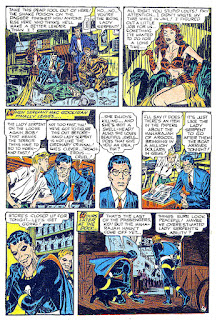 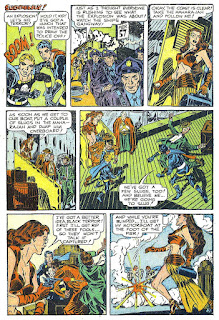 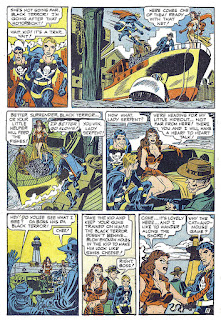 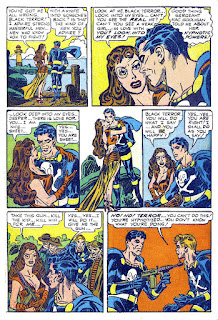 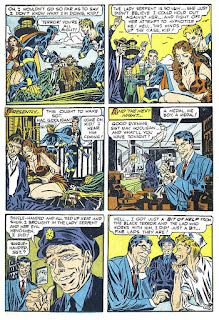 So she gets to keep her costume and, I assume hypnotic, eye piece in jail? This universe's jail is worse than Gotham's revolving jail!

This one is a fun, as the little rascals would say, "he-man-woman-hater-club" story. I don't think I'd have to be hypnotized to fall under her spell, but the Black Terror just shakes it off, because, damn it, paging Dr. Werthman, he's not going to use his gun on his kid sidekick!

Man, Werthman's job was pretty easy, wasn't it? You can about read/imagine any subtext you want!

It's interesting to compare Lady Serpent with Lady Viper at DC (see the Batgirl backup feature in Detective Comics #s 514-517). Another DC character she strongly resembles is Prometheus, who was obsessed with killing police.

Is Robert Kennedy a visitor here? Perhaps he'd be interested in writing the account of her first battle with the Terror Twins?