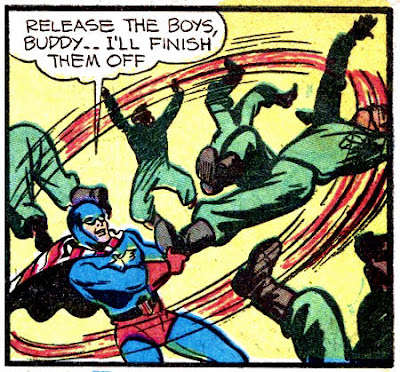 The Eagle first appeared in Science Comics #1, a Fox Features publication. The Eagle went through some costume changes over time, even the name of his sidekick, who was originally known as Daredevil Boy.

The Eagle looked like this in his first appearance in Science Comics. The Public Domain Super Heroes site informs us that Eagle could not fly, but he had an “anti-gravity solution he soaked his cape in.” 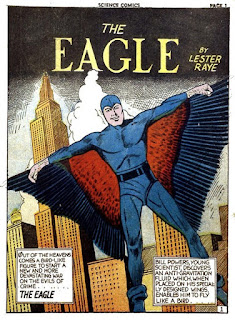 This is how he looked for Science Comics #2. Perhaps his shirt and pants were still at the laundry. 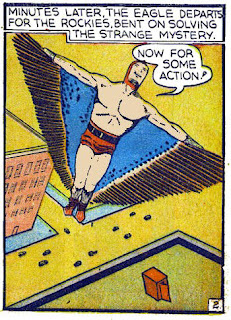 His own title, The Eagle #1, came out in 1941, on the heels of the success of Timely Comics’ super-hit, Captain America #1. That first issue sold so well that Timely Comics publisher Martin Goodman went back to press for more copies to keep up with the demand. That would probably be enough to get Victor Fox, publisher, to turn The Eagle into a soldier, and even include that young friend. Captain America had Bucky, The Eagle had Buddy. The Eagle’s costume was changed (again), this time with a red-striped cape for both Eagle and Buddy, reminding one of an American flag.

No writer or artist attributions by the Grand Comics Database. From The Eagle #1: 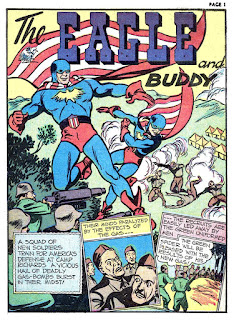 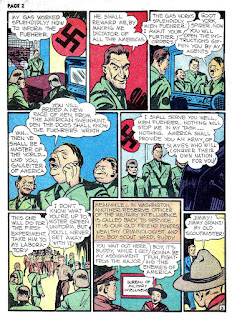 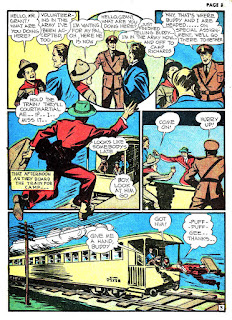 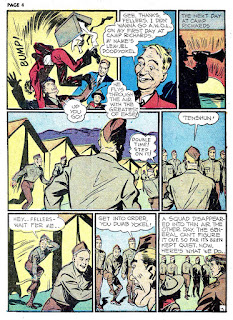 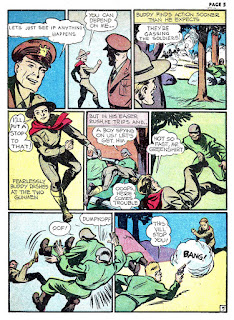 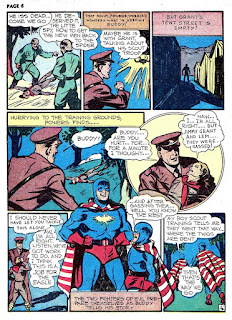 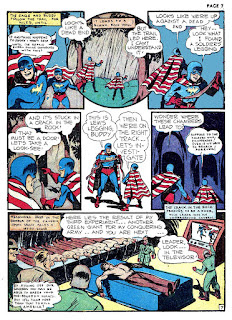 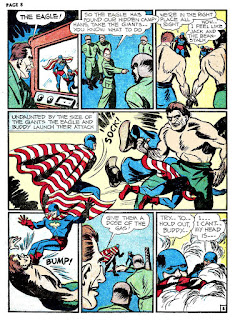 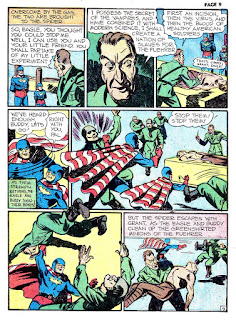 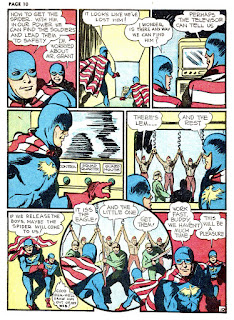 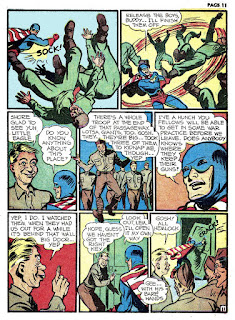 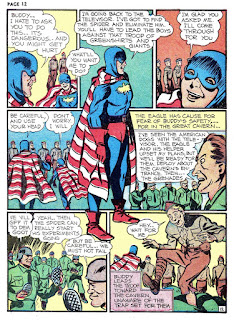 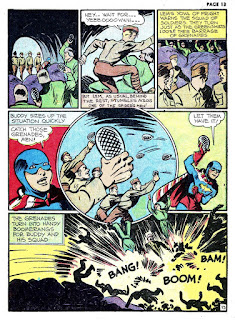 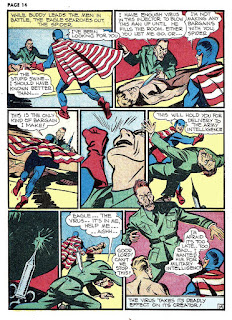 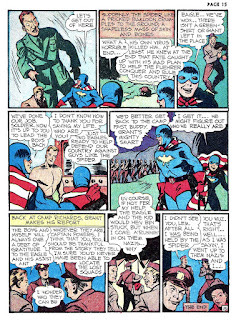 Things have been expected of chemistry that are well outside its scope. An anti-gravity formula is right there with one to transmute lead into gold.

I was amused that Grant, in place of a damsel-in-distress, was carried-off by the Green Spider.

I believe that Lemuel should have been caught in the blast of grenades. Meanwhile, other life was cheap; the Eagle and Buddy seemed quite satisfied at the destruction of the giants, though they were American soldiers and victims of a villainous treatment. I note in contrast that the Batman had expressed regret at the necessity of killing a fellow similarly victimized by Hugo Strange. Certain, all such victims would have been cured in a silver-age story.

Having the strips go across the cape rather than down it looks odd to me. I realize it's to give the impression of the stripes on the American flag, but to me it looks more like they grabbed a couple of restaurant tablecloths.

Daniel, I'm interested in both Fass and Fox (that sounds like one of those law firms that take on accident cases). Publishing in those days must've been quite a business. There were elements of organized crime, and guys who had really hustled to build their businesses.

I don't know if Fass did what Fox did, which was avoid paying for work done.

Smurfswacker: You may have correctly guessed how the pair got their costumes.

One wonders how all of those costumed heroes got their costumes. Was there a special tailor shop just for them? How much did those costumes cost? Nowadays cosplayers seem to do a pretty good job with costuming. I dunno who did it in the late '30s, early '40s.

Pappy, I don't know where all the costumed heroes and villains got their uniforms but I do remember an old silver age Flash (#155) story where it was revealed that all of Flash's foes got their costumes specially made by a tailor named Leach.

The question of the source of super-suits bothered me as a kid, so I was delighted with the Silver Age story in which The Flash discovered a tailor who specialized in costuming super-villains (it still didn't explain where the heroes got theirs).

Always amazes me that the "growth virus" (serum, ray, whatever) makes the clothes grow along with the victim.

Rick, Smurfswacker: Wow, that is cool that you both educated me by remembering the guy who made the Flash's villain's costumes. I wonder if he advertised, or was his business supported by word of mouth?

Wayde: costumes and their origins are usually ignored in comics, so we don't know if when the guy grew big that tailor who made the villain's clothes (see the comments from Rick and Smurfswacker above) got out his special sewing machine and great big bolts of cloth especially for people who are turned into giants.

Both the Spectre and Marvel's Daredevil were shown sewing their own costumes in their origin stories.