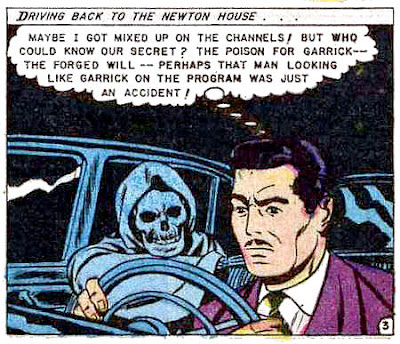 The characters in “The Ghost on Television” fit the usual horror comics profile. Wife has murdered husband; she and a crooked lawyer have not only taken over the husband’s television network, they have cheated the husband’s daughter out of her share of the fortune. A pair of murderous rotters, who will have revenge “channeled” to them.

Having wasted...er...watched incalculable hours of the idiot box in my lifetime I recall there were ghosts a’plenty on my family television. In the early days the ghosts I remember came from poor reception, and required adjusting the rabbit ears antenna until the ghosts on the screen went away. That isn’t good enough for horror comics, which often used the dead as returning to life, in this case in a ghostly form, to get back at those who put him in his grave.

Art attributed by the Grand Comics Database to Frank Giusto. From The Beyond #16 (1952): 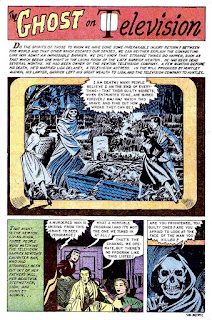 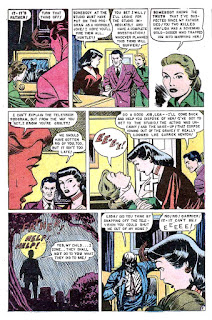 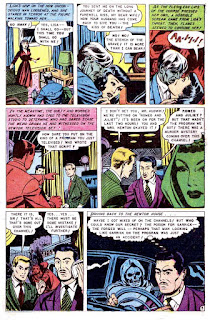 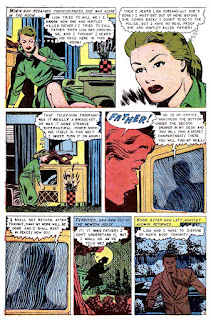 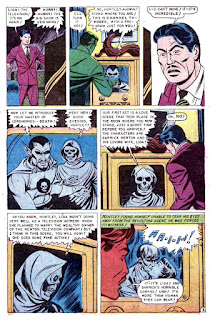 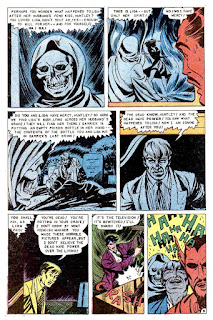 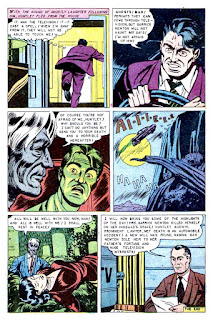 Email ThisBlogThis!Share to TwitterShare to FacebookShare to Pinterest
Labels: Ace Comics, Frank Giusto, The Beyond

Man, I love this one in so many ways. The puce coloured suit, the "fleshless lips" line, the corpse climbing out of the television, the superhero devil, and most of all the "panic face" of the wife in her dead husband's clutches, where she looks at best mildly annoyed. This one is great, Pappy. I needed the laugh. Thanks!

I love the art on this one, clean and crisp. I love the very super-villain-ish Satan, nice costume, with a logo and all!

Story doesn't really stick the ending, though, if the plot revolves around the TV, don't kill the main bad guy with a regular old car accident!

I wouldn't be surprised by this story as filler, but it was the lead piece in Beyond #16.

The horror of a story of sexual duplicity, murder, theft, and then vengence is largely in the first three; and, had the duplicity, murder, and forgery been shown, the emotional commitment of the audience to the notion that Lida and Huntley were evil would have been stronger. But the first part of the story is told in a relatively long prologue that adds no value because the reader could have inferred the relevant information from the remainder of the story.

That remainder involves a lot of wasted motion. Why did Satan, Death, and Garrick bother with the narrowcast? Why didn't Huntley use the telephone? Why did Death wait until Huntley's third car trip?

Ah, fond memories of over-the-air television. Ghosts...snow...images flipping and rolling...test patterns featuring a giant Indian's head and lots of mysterious numbers...wondering why there is no channel 1 on the tuner...turning the knob on the rabbit ears to each setting and somehow always making the image worse...having the picture break up when a plane passed overhead...carefully hand-tuning a UHF station...the nightly sign-off prayer followed by a grainy film in which the "Star Spangled Banner" plays behind (depending upon the station) footage of American military might or of beautiful American scenery...the sudden burst of static, a long beep, and nothing but snow until six AM the next morning. Can't say I miss any of that. It is funny how today it's impossible to imagine a life without 24-hour-a-day media, much less communities in "fringe areas" who had to constantly strain and fine tune their sets in hopes of picking up the single regional broadcaster.

Oops...sorry, young feller, rambling again. (Now, now, Grandpa, back to bed with you.)

Well, Smurfswacker, you and I share those early days of television. Luckily, we didn't have rabbit ears in those days. Dad put an aerial in the attic, so the neighbors wouldn't know we had a TV. He and Mom were both against neighbors showing up wanting to watch a program.

You didn't mention the TV going out because a vacuum tube went bad, which I remember. Mom was pretty fast at getting the tube out and we would go to the closest U-Testem Tube Tester, where she could replace the specific bad vacuum tube. No calling a TV repairman when Mom was faster and just as good at it.

I also remember standing next to her (I was about 7 or 8) when a man watching her checking out the vacuum tubes started hitting on her. She shooed him away with silence and a glowering look, and said to me, "I think that man was trying to pick me up." That was the first time I had heard that expression and put two-and-two together as to its meaning.