Number 2310: Little man in a big world, big man in the comics 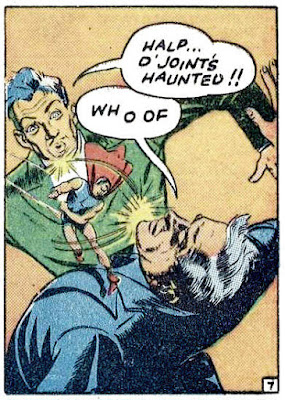 It was once my opinion of Doll Man, who could shrink yet retain the strength of a grown man, that boys may have been reluctant to buy a comic book with the word “Doll” in the title. Doll Man was the star of Feature Comics for a long time, and shared the mark of success with other Quality Comics heroes, like Plastic Man, by gaining his own title. Wartime paper rationing caused the title Doll Man Quarterly to be suspended in 1943, but Quality revived Doll Man’s comic book in 1946. He continued appearing on newsstands until 1953. I assume from Doll Man’s track record that boys were not deterred from buying a comic book with the word “Doll.” So much for assumptions.

This is the first story from the first issue of Doll Man Quarterly (1941). Grand Comics Database lists the artist as John Cassone with a ? to indicate they are not sure. 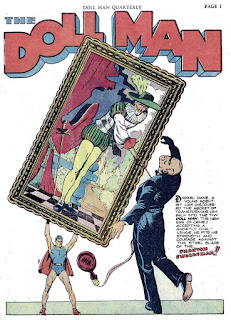 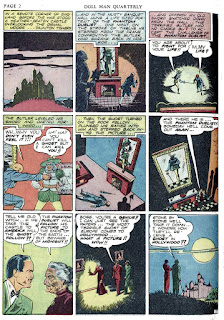 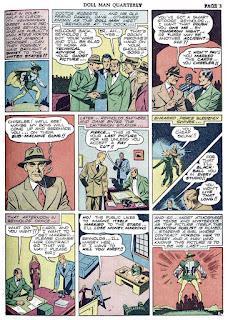 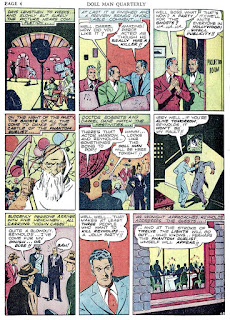 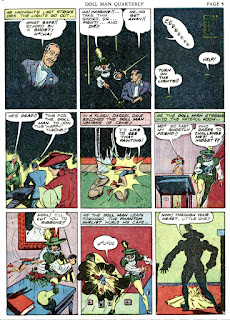 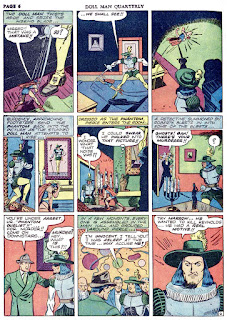 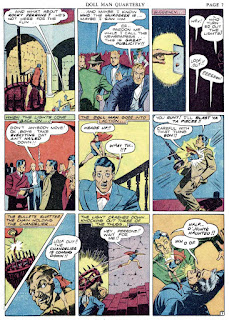 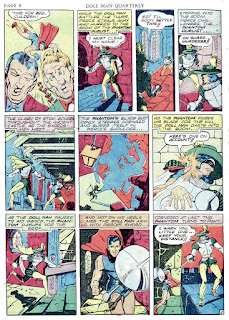 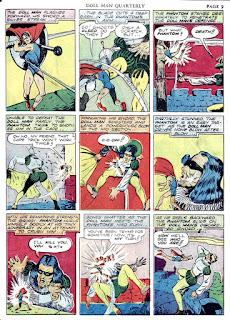 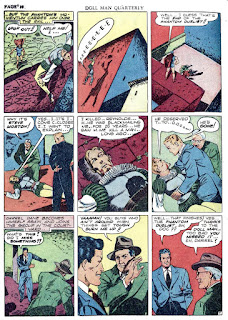 Doll Man was created by Will Eisner. Here is the origin story, plus a get-small horror story, and a link to the origin of Doll Girl. Just click on the thumbnail. 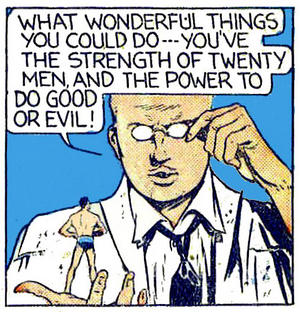 I’d bet he was popular with girls too.

So, can anyone explain why Steve Morton, who had changed out of his Phantom Swordsman costume by 7:2, then changed back into it?

Really, one was made to guess that it were Morton in 7:2. He's mentioned in the narrative pane of 3:1, but makes no clearly identified appearance until 10:4-5. He's barely more than invented in his final moments.

I don't think that I'll ever care for stories in which Our Hero fails to stop a killing about which he is forewarned and for which he is on-site, yet then pursues the killer as such.

For the most part, I appreciated the art. But the image of Dane in the second to last panel is off, as if begun by one hand and then thoughtlessly completed by another.

Will, such were the comics of that era that boys, girls and even grownups read them. I know that comics were aimed at either sex and any age. For some reason, probably thanks to their most vocal credits, they were considered aimed at impressionable young boys exclusively, which I don't think sales of the time reflect.

And the reason for your comment is because I said my early impression of a title called Doll Man would have turned off boys, perhaps the boys hid them in the middle of the stack of comics they were buying or keeping in their closets or under their beds, so no one would know they were reading comics about a Doll Man.

Daniel, you should be doing this blog, old friend. You see a lot more than I do!

`Pappy, I remember finding some Doll Man stories when I was a boy. I thought the name was odd and I didn’t care for the bare legs, but I liked the art work and the whole miniaturization thang, so I wasn’t really turned off.

I am only one example, of course.