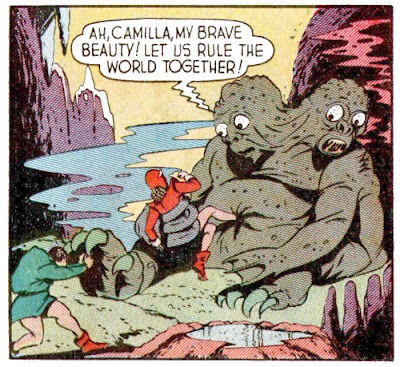 At a later time Camilla, Queen of the Lost Empire, became a typical jungle girl, dressed in a two-piece zebra skin costume, with her origin re-written. But at the time of this early story she was still the Queen of the Lost Empire, and in the episode, having an adventure outside the usual realm of jungle beauties. She and the hunchback, Caredodo, encounter Satan, but first they meet Mephistopheles, the servant of the devil. Satan is portrayed as a two-headed ogre, which I believe is unique for stories featuring the devil.

The story also features the “angel of faith,” who looks like a standard angel with wings. Oh, and I almost forgot to mention that Camilla carves a cross out of stone with her sword. The whole story is based on religious belief, and while comic books sometimes used religious elements in their plots, the plot here hinges on the most potent symbol of the Christian faith.

The story appeared in Jungle Comics #7 (1940)> Grand Comics Database credits Bob Powell with the artwork. No writer is listed, but the script bases the usual comic book “magic” on faith in the Christian deity, and for Caredodo a miracle. 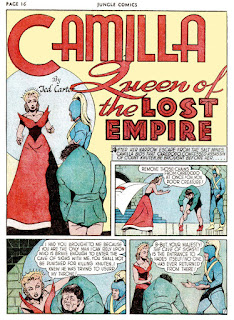 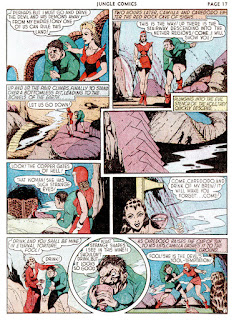 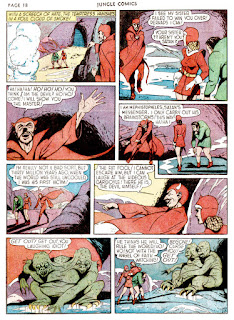 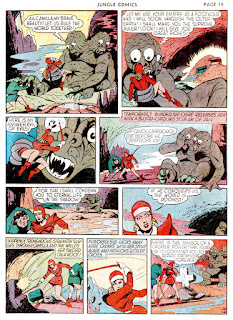 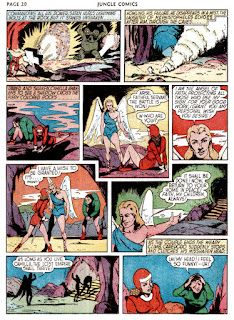 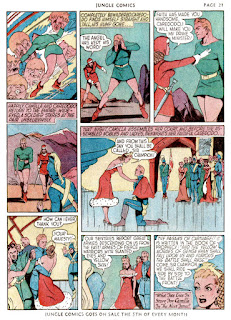 Odd tease at the end for next month's adventure. You'd think after defeating Satan, Genghis Khan would be a breeze

Some years ago, in The Magazine of Fantasy & Science Fiction, I read a story of a princess who, on a mission, went to Hell, accompanied by a physically deformed but virtuous man. They entered by way of a cavern. Now I'm led to wonder whether there were some prior template with a deformed companion and with which I am unfamiliar, or the author of the tale in MFSF drew upon this story from Jungle Comics. (The more recent story certainly was substantially different from the JC story.)