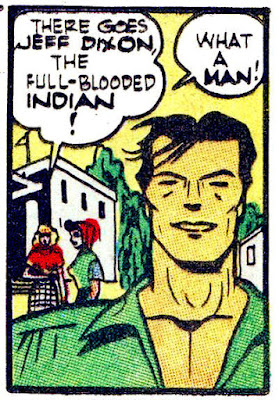 “Real American #1” — aka “Bronze Terror” — was the son of an Apache chief, and went after some bad white men. This story is the origin story from 1941, in Daredevil Comics #2. The feature lasted another 10 issues before disappearing.

It was created, written and drawn by Dick Briefer, who created several characters for the comics, but is best known for his long string of Frankenstein stories which he kept up until late 1954 when the Comics Code came in. Briefer then left comics. Some biographical sources tell about Briefer’s comic strip work for the Communist Party USA newspaper, The Daily Worker. If he intended a call for racial justice with this presentation then I think the synthetic nature of comic book heroes kept that from happening. The story contains stock clichés about Indians, giving the story a false sincerity.

Jeff Dixon is the chief’s son (...and where did he get the the name “Jeff,” or for that matter “Dixon” from an Apache father who wears full native regalia?) Jeff is patterned after the famous real-life Native American athlete, Jim Thorpe (aha! Another American-sounding moniker!) For better or worse, Indians in comic books were not that uncommon, but some representations of their lives and culture were more accurate than others, including this one. 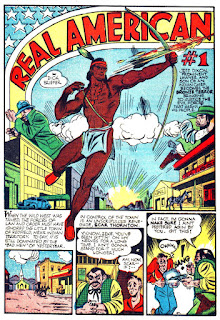 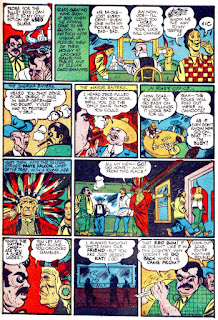 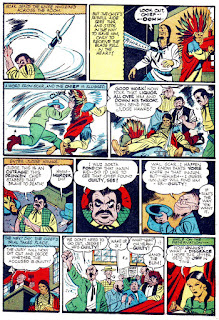 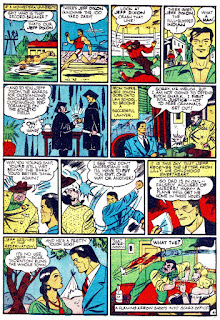 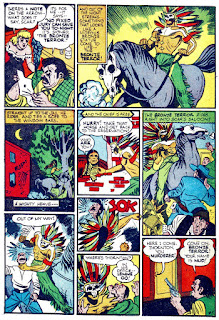 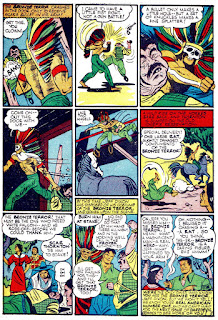 The positions of the Communist Party USA (and of communist parties more generally) on race were rather more plastic before World War II than is now widely understood. Briefer was no more likely (and possibly less likely) than any other white comic-book writer or artist of that time to understand the (or act as if he understood) the perniciousness of racism. Further, Marxist communism was an ideology grossly unsympathetic to the perceived interests of any but what was imagined to be the urban proletariat; hunters and farmers were seen as largely expendable people.

Reservations in this period were ruled by the Bureau of Indian Affairs rather than by tribal leaders. (To a significant extent, these reservations were models for the internment camps in which Japanese-Americans would be confined.) In a plausible scheme, the local BIA officials would have been part of Thornton's gang, so Jeff would have had to deal with them as well. (In real life, the Federal Government would, if at all possible, have acted against the aborigines rather than allow such corruption to come to light.)

Daniel, if Briefer had a notion to show a more sympathetic portrait of a Native American, it would have been offset by the dark coloring job of Jeff in the splash panel.

I look at any depictions of non-whites as racist within the framework of the times, even if the artist denied it.