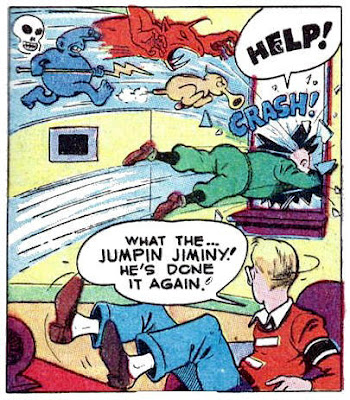 Dickie Dean was a boy genius inspired by the fictional Tom Swift, who was patterned after the real-life Thomas Edison. In this example of Dickie’s inventiveness, he created a lamp that causes hallucinations. No forcing an enemy to ingest a substance to make him see things that weren’t there...Dickie just turned it on by flipping a switch, which in turn turned the enemy on.

Dickie should have warned his buddy, Zip, who has a really bad trip thanks to Dickie’s lamp.

Dickie Dean was created by Jack Cole and first appeared in Silver Streak Comics #7 (1940). Bob Montana also drew Dickie Dean. He did this episode close to the time he drew the first story featuring Archie for Pep Comics. Charles Biro, editor of Silver Streak Comics, had also worked for MLJ, publisher of Pep Comics before the MLJ line began its transition from wild blood-and-thunder superhero adventures to a line devoted to teenage hijinks. 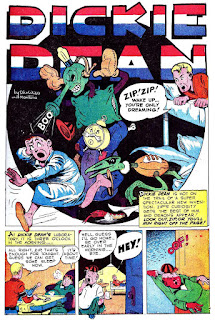 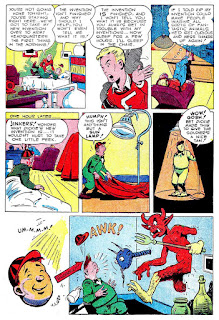 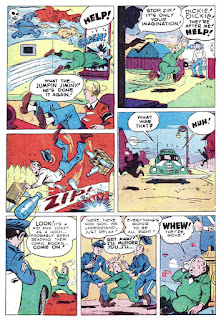 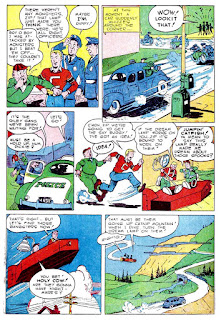 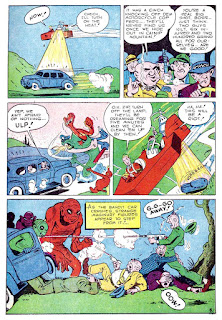 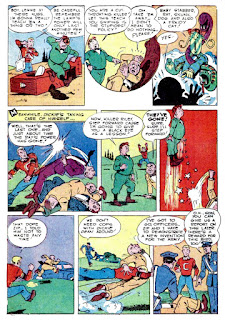 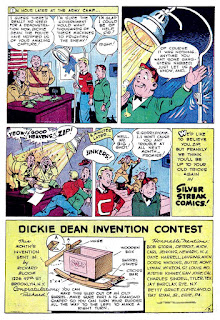 I also enjoyed the loyalty super-heroes or super-scientist paid to their comedy side kicks. Without Zip around, Dickie Dean would have solved all the world's problems, yet he keeps allowing the annoying idiot to mess with him!

... or maybe not. Instead of curing disease, he's inventing dream lamps. He might never get to solving real problems!