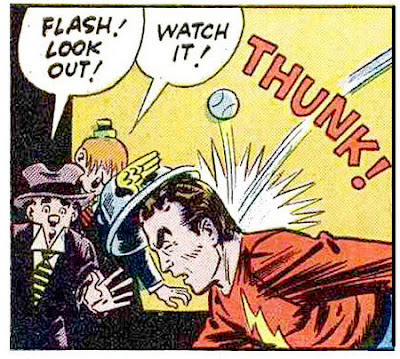 I mentioned a couple of weeks ago that I assumed Captain Marvel was aimed at youngsters, and I believe the same of the original Flash and Green Lantern comics. It has to do with the cartoony artwork, and an attempt at laughs. I say attempt because of the three dimwits, Winky, Blinky, and Noddy, who were the comedy relief for the Flash (just as Doiby Dickles was for Green Lantern). The dimwits were based on the Three Stooges, but there the resemblance ends.

This story stuck out for me because of the plot. A man can see the future while hearing the present.

In spite of the three dimwits, I have an affection for the Golden Age Flash, having first encountered him in the Silver Age story, “Flash of Two Worlds.”

Artist E.E. Hibbard drew a lot of Flash stories. He left comic books in 1947 and went to the J. Walter Thompson advertising agency. Later he became a member of the Society of Animal Artists. Gardner Fox wrote the script. 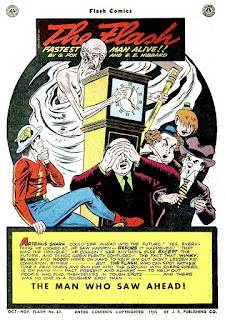 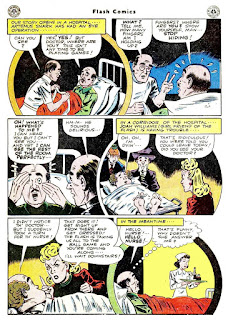 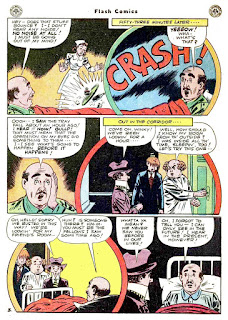 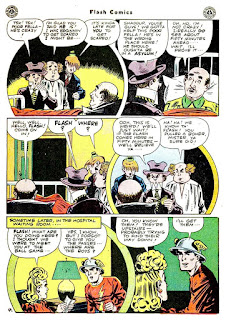 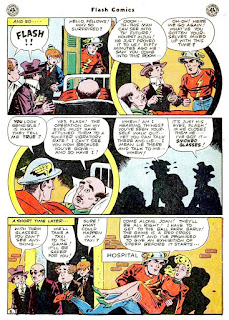 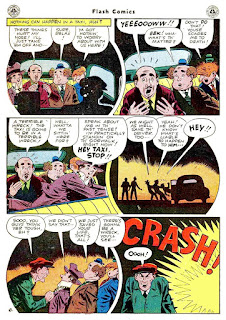 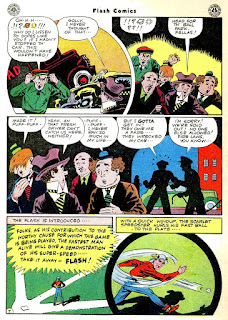 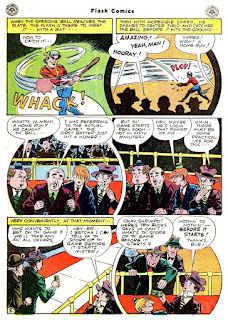 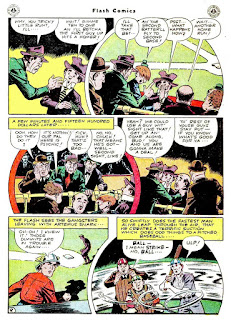 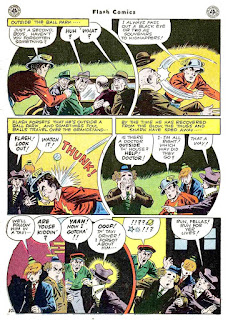 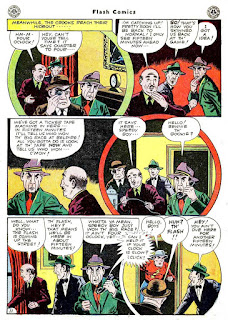 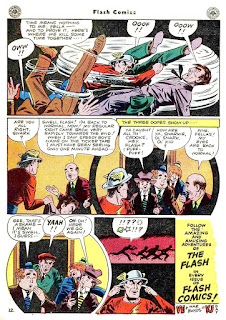 I didn't encounter the Golden-Age Flash until a bit later than did you, but it was likewise in his appearances with in the early '60s. And he was one of my favorite characters in the first few years of my reading comic books. I liked the Silver-Age Flash quite a lot, but I liked the Golden-Age Flash still more. Part of his appeal, though I was very young and my father's hair showed no grey, was in this Flash being older than the other heroes.

There's a very great chance-coïncidence or a simple failure of story-telling in Artemus Snark saying “Well, well, hello, Flash! Come on in!” right after Snark has declared that he will prove that he sees about fifty minutes into the future. After all, his remark about proof should have come before he saw the Flash, otherwise he would more plausibly declare “Wait, I'll prove it… The Flash will be here in about fifty minutes!”

The speed of light of course is constant in a vacuum, and very nearly the same in Earth's atmosphere. A swifter vibratory rate corresponds to a shorter wave-length rather than to a greater velocity. The real result of different vibratory rates is different colors. If Snark's eyes were sensitive to greater vibratory rates, then what we saw as red might become invisible to him, while he'd see into or above the ultra-violet range.

I appreciate that prophecy of the car wreck were self-fulfilling. Whatever else one makes of stories in which information seems to flow backwards in time, it can only be logical if the system is closed. That doesn't mean that the universe has to be deterministic, but that it has to be something that is practicably indistinguishable from the deterministic.