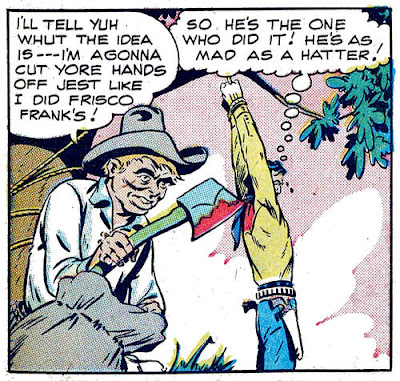 This story, from Tom Mix Western #9, is what is called a Seduction of the Innocent (or SOTI) story. The complaint about  “Hands Off!” is told in Chapter 12 of Fredric Wertham, M.D.’s infamous anti-comics book. If you go to the link below you will find a blogsite with the chapter, which will explain more. Why Wertham and Tom Mix Western publisher Fawcett got into the threat of a lawsuit for libel and other back-and-forth between them is fascinating, with its example of how a publisher could become defensive about their product when it was singled out by Wertham.

As for my opinion of the story, I think it is thin; Tom has a dummy of himself, made by Indians. Why? No reason given. It figures into the story’s end, though. In one of his rebuttals to Fawcett’s argument Wertham says there are three pictures of “hacked-off hands” in a box found by two little boys. No hands are shown in the pictures, so that’s misleading. Cutting off hands does seem to be the talent of the tale’s villain, besides being a sharpshooter who has escaped from an “insane asylum.” Wertham doesn’t mention the two pages of panels where Tom Mix is hanging by his wrists from a tree limb. Bondage and torture were big in comic books, but if the victim and villain are both male, maybe it didn’t count with Wertham.

Comedy relief was supplied by a panel of Tom Mix standing on his head and shooting his gun while riding his galloping horse. As a kid I saw acrobatic cowboy action in many of the old B-movie Westerns I watched, but that one was new to me!

Tom Mix Western #9 was published in 1948; Grand Comics Database has no artist or writer listed. 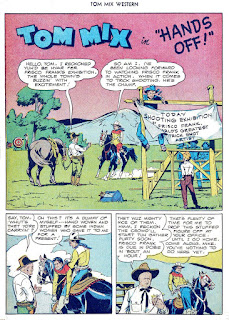 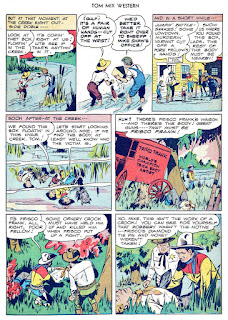 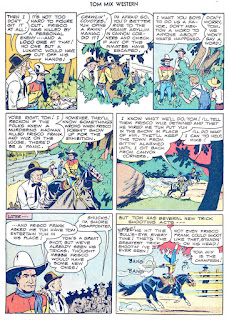 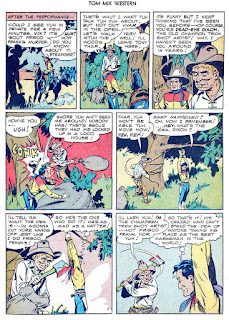 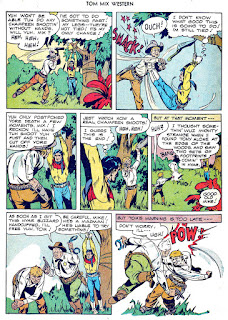 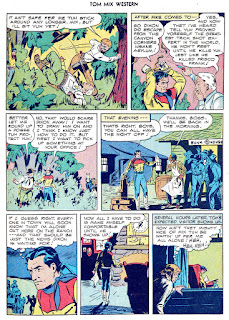 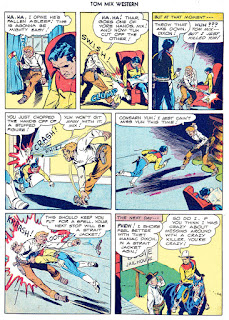 Fredric Wertham, M.D., spoke of this Tom Mix story in his book, Seduction of the Innocent. You can read the relevant information on this website: Altruistic World Online Library.
Posted by Pappy at 12:01 AM

A tale of a villainous sharpshooter and a dummy. Where have I encountered that combination previously?

The closest I could find for credits in Jerry Bails' Who's Who were Pete Riss and John Rosenberger, both in 1950.