Number 2297: Angel flying too close to the ground 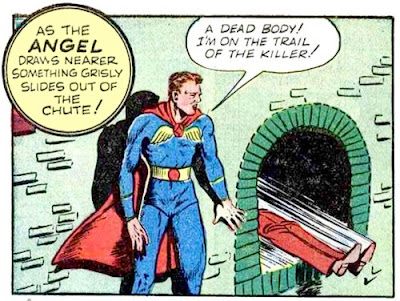 Although his status was as a filler superhero, and never a star, going back to Marvel Comics #1 (1939), the Angel was featured in several Timely Comics of the 1940s. The character was created by Paul Gustavson, who went on to Quality Comics, and is considered one of the better comic book artists of that early period. At first the Angel had no secret identity, and nothing to identify why he was in such a gaudy costume.

“[The Angel] did have a secret identity, private detective Tom Halloway. A text page written by Ray Gill (who also has credits at Lev Gleason, Novelty Press and elsewhere) in Marvel Mystery Comics (as Marvel Comics had been re-titled with its second issue) #20 (June, 1941) gave his background. Halloway's mother had died in childbirth and his father, a prison warden, had raised him in the prison, isolated from outside human contact except for the experts the warden brought in to teach the boy everything there was to know — successfully, it appears, as his range of knowledge sometimes seems to have rivaled that of The Junior Woodchucks' Guide Book.”

I chose this particular story because it is more gruesome than usual (reflecting the kind of mood I am in as I write this). A man has a rare disease, needs constant blood supplies to keep him alive, so when the hospitals can’t help him anymore he kills people and takes their blood. (I have a question about blood types, which the story does not address.) In one panel we have a scene which would have been right at home a decade later in Dr Fredric Wertham’s Seduction of the Innocent. Human corpses on meat hooks in a slaughter house! Yow.

From Marvel Mystery Comics #30 (1942). No writer or artist is listed by the Grand Comics Database. 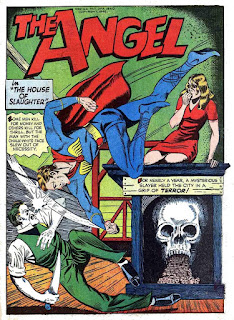 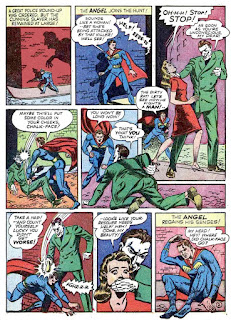 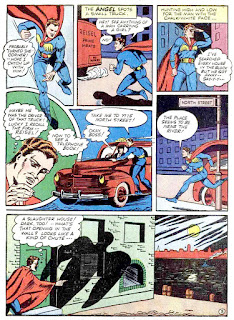 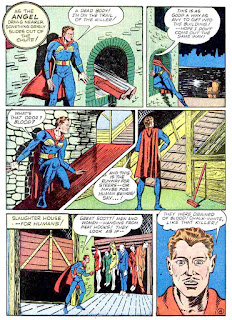 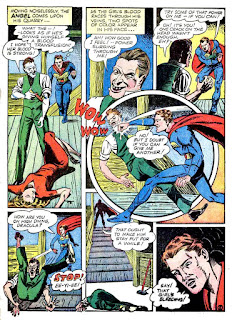 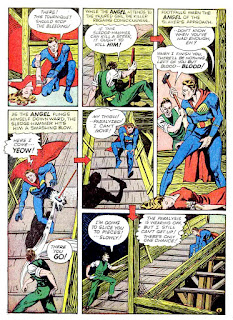 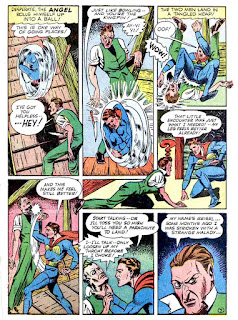 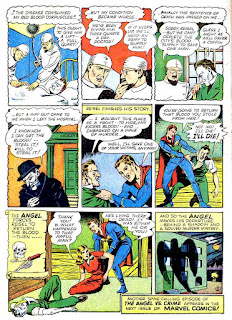 I love how he seems to transfer a whole human body of blood with a single syringe! That had to take a while!

The artwork is really good for 42, there's an amateurish quality to some of it but it's dynamic and nothing is very static. And the meat-hooks thing .. yeah, that had to be shocking at the time.

In essence, this story is of the sort that would have appeared in those pulps that sought to be especially ghastly.

There's a rather obvious question of why Reisel didn't take the Angel, rather than the young woman, and didn't just kill whomever were left behind. Each would have seen the killer, and been able to report his appearance to the authorities and to news outlets, the Angel would have been a more direct subsequent threat than the girl, and the Angel almost surely would have offered a greater volume of blood.

As to returning the blood taken from the young woman, let us hope that she didn't, in process, receive an agent of the disorder that caused Reisel's red corpuscles to be destroyed.

My best guess is that the Angel began with the thought of cloning Simon Templar, the Saint, with the added superhero costume serving no purpose except exactly to make him a costumed superhero.

Brian, "the ever full syringe..." the recipient's arms would be useless after all those injections.

I mentioned the meat hooks after reading about Sterling North in Jill Lepore's The Secret History of Wonder Woman. North was the literary editor for the Chicago Daily News in 1940, when the newspaper declared "war on comic books." North said "...ten million dollars of these sex-horror serials are sold every month." Torture and people hanging from meat hooks would naturally attract the eye of someone who wanted parents and teachers to "band together to 'break' the comic magazine." I'm sure as much as adults hated stuff like that, the kids (and servicemen) who bought comics probably either didn't care or loved it.

Daniel, Martin Goodman, publisher of Marvel Mystery, was also publisher of a pulp line, so yeah...what you said: "this story is of the sort that would have appeared in those pulps that sought to be especially ghastly."

I guess the irony is that comic books were as much a reason for the demise of the pulps as anything else that competed. In comic books one could follow the pictures and not have to read; pulps at least demanded that a person could read.