Number 2318: The Clock introduces Butch to the iron maiden 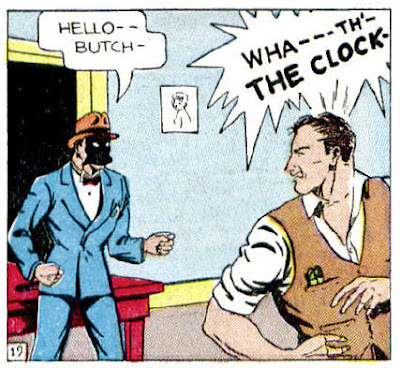 The Clock, early masked do-gooder, began his career in the earliest days of comic books, 1936 to be exact. He found his way to Quality Comics and Feature Funnies, beginning in #3 (1937). This story is from Feature Funnies #6 (1938), written and illustrated by the Clock’s creator, George E. Brenner.

I have shown a few Clock stories in the past, and you can find them by typing his name into the search engine in the upper left corner of this page. What I see in this story is that the Clock has a torture chamber where he takes crooks to scare them. I know I would be scared if someone threatened to put me in an iron maiden. Who knows? Maybe between issues he actually tortured people. “One can’t help but get chatty in the confines of my torture pit!” the Clock tells bad man Butch. What jolly fun we find in early comic books! 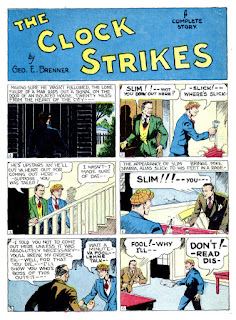 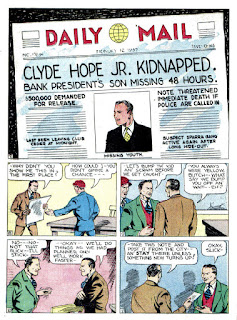 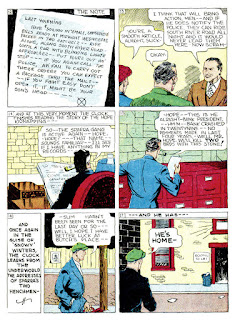 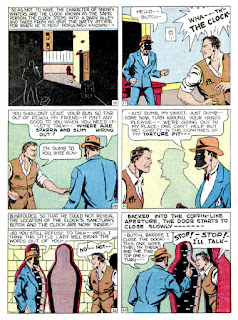 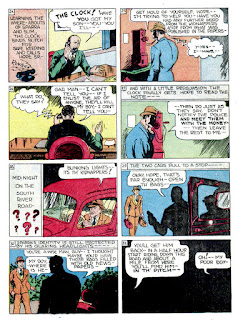 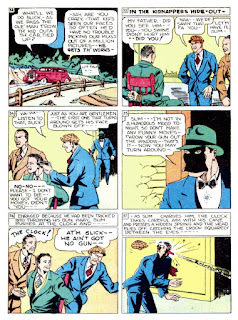 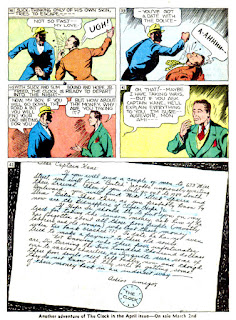 It seems that the Clock was not recognized as the first comic-book superhero for no better reason than that the term “superhero” was seldom used until after Superman was first published. (Of course, the template for superheroes predates comic books, as in fact does the word “superhero”.) But I'm certainly glad whenever I get to see one of the early appearances of the Clock.

I especially enjoy the art, which has so many of the characteristics of its era.

(I notice that the image files here have some pronounced artefacts of what appears to have been a problem with the scanning process.)

Although I don't think that the word “torture” were applied to the actions of Doc Savage, he used to extract information from people by using his knowledge of pressure points. (Even as a child, I found this behavior disturbing.) And lots of Our Heroes beat things out of people, somehow never clobbering the wrong guy. Things in and out of the fictional world of superheroes don't change as much as some of us would like. In 2016, when the television show Supergirl was being scripted with a presumption that the candidate of the favored party was surely going to win, Alex[andra] Danvers wrenched the thumb and later beat information out of a non-suspect whose great wicked act was to say that Olivia Marsdin were “not my President”.

George Brenner was a good writer-artist, who went on to become editor at Quality. I don't know if he drew anything after getting the promotion.

I don't remember when I first heard the term "super hero" or saw it spelled "superhero," but I remember when DC and Marvel tried to claim it as a shared trademark, which may be why at least one other publisher called their superheroes "ultra heroes." As I recall, the trademark try did not work.

The Phantom was introduced in 1936, which is when the Clock first appeared. You could go back to some of the dime novel heroes, Nick Carter, for instance, who was a master of disguise. They weren't superheroes, though...nor was Batman. We referred to comic book heroes without super powers as costumed heroes, or crime fighters. Now it seems the term "superhero" covers all those characters, super powered or not.

Oh yeah, beating up the bad guys was big! Vigilantism was rife in fiction, movies, etc. I saw it often in old cowboy movies and on TV crime shows. Because of television I thought of it as a legitimate way to extract information. Unfortunately, it is still the way with some police and part and parcel of "justice" in some other countries.