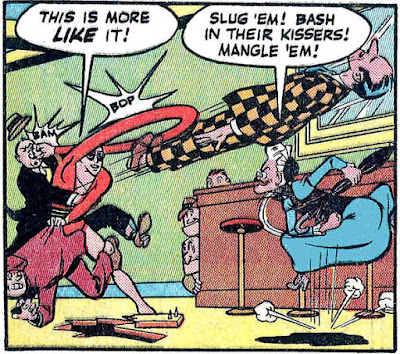 Selena Sloop is the little old lady, a reformer, who wants criminals to be helped rather than put in prison. Despite being backed by an organization of “50,000 women” in her crusade against the FBI and Plastic Man, she needs help from Plas and Woozy when gangsters Loopy Louie and Deadly Dean go after the $50,000 (actually $49,999) she has in cash to help in her efforts to reform them. The crooks thought they could make better use of the money.

What Selena doesn’t know is that both Plastic Man (as Eel O’Brian) and Woozy Winks are former crooks who have reformed themselves. (And Plastic Man’s super power is to reform and deform his elastic body).

This is from Police Comics #34 (1944), with artwork signed by Plastic Man creator Jack Cole. 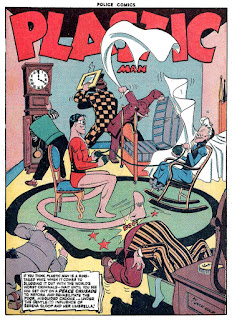 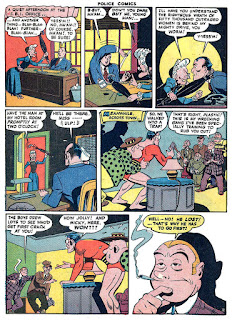 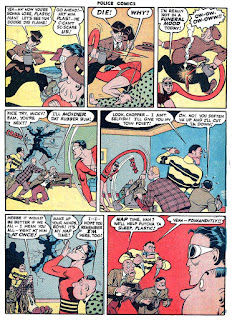 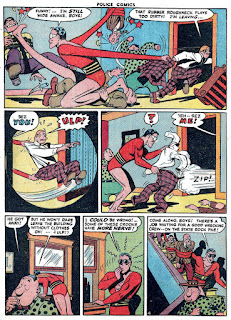 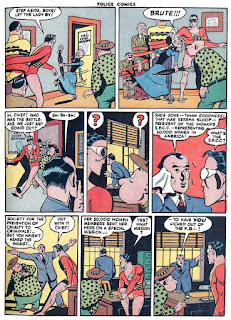 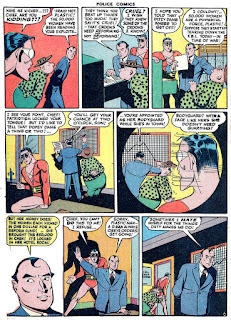 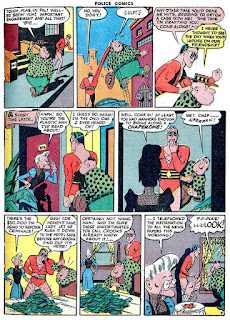 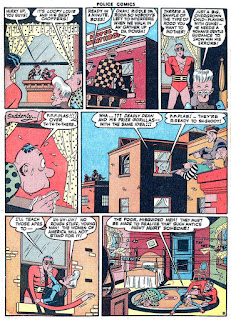 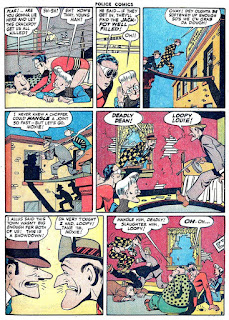 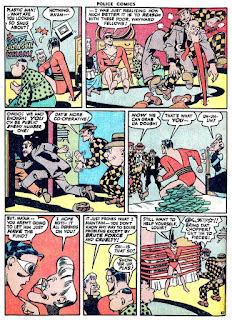 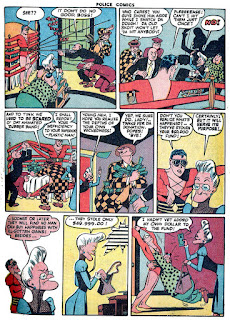 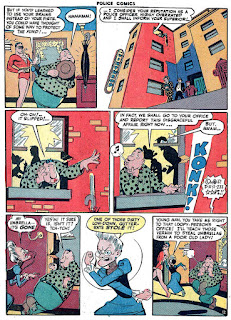 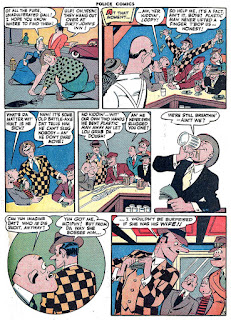 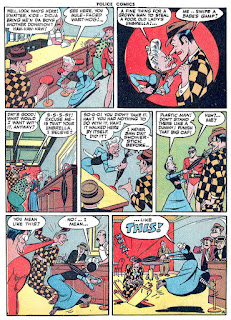 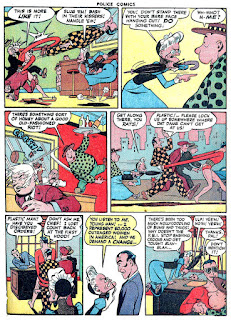 A cute story. I love Woozy's much bigger part than usually being an object of distress for Plastic Man to save or just prat-falling.

Great art (as always.) Story is a bit predictable, but a breezy read.

Brian, I wondered what was riffling my hair as I posted this story. Must be that "breezy read" you mentioned!

Selena Sloop is a ringer for Cole's other feisty battlin' spinster, Granny Gumshoe, who built up a startling Rogues Gallery during her brief run in National Comics.

What a great little tale! And it included that classic gambit of punishing the crooks for the one thing they didn't do! Why wasn't Cole prouder of his comic-book work? He obviously put his all into it. This story had high-quality art, solid plotting, clever wordplay, and panels filled with activity. To me, the only "goof" was: Why would Plas hide on the floor during all the shooting if he's invulnerable to bullets? Also, though it was chuckle-worthy, I was a little uncomfortable with the fact that the ending seemed to follow that old saying "A Democrat is just a Republican who hasn't been robbed yet." Still, as in the best comics, I learned something new: that "gamp" and "shower stick" are alternative names for umbrella!

Sadly, no one after Cole knew quite how to handle Plas. Kyle Baker and the team of Phil Foglio and Hilary Barta made great attempts, but it just wasn't the same. After all, Cole made Plas smarter than most other heroes: as an FBI agent, he actually got paid for doing his superheroing!

The other day, you said you wondered where I went, Pappy. Sadly, I got lost in Facebook, especially during the political season. I wrote a whole series of posts on the history of horror comics, a lot of work that only the members of one FB group ever saw. And I completely revamped the Wikipedia page of writer Steve Skeates. If I'd gotten paid for all this writing, I'd be very well off now, but I have a ridiculous tendency to slave over free content. The last short story I wrote was about Superman's dad, Jor-El, which obviously could never get published. After all that, I realized how long I'd been away from your blog and how much I missed it. How could I ever have stayed away??

Ryan, don't forget brolly as slang for an umbrella, and umbrella in French, parapluie. As I used to sing on rainy days when going off to work, "Parapluie, oh baby now, me gotta go."

I certainly understand writing for free, since I don't get paid anything for writing or producing this blog. It takes hours, but those are hours I'm not sitting on my couch channel-flipping to find something interesting. We might share the need to pass along information (and opinions), whether someone pays us or not. I think that not getting paid for something I do gives me total freedom to do it my way, at least.

I am sure that Cole was proud of Plastic Man, but he was also aware that comic book creators were looked down upon by the public. It may be why he stopped signing his name during his latter years working in comic books. I believe Plastic Man was a good seller right up until publisher Everett Arnold sold his entire line to DC Comics...but I don't think DC had the slightest idea what to do with the character. They waited about ten years to revive him, and I remember how disappointed I was when I saw the results.

I did like Hilary Barta's artwork on Plas very much.

I also thought everyone else's stretchy heroes (including Mr Fantastic and the Elongated Man) were pallid imitations. (I put up with Mr Fantastic because I loved the Fantastic Four by Kirby, and I never liked Elongated Man. For one thing, the name was bad. Elongated? Egad.)

Luckily, we have all of those issues of Police Comics and Plastic Man on the Digital Comics Museum and Comic Books Plus sites, and I have my DC Archive Editions, so I don't need to dwell too much on what might have been, because in my opinion, what might have been...was!

Billy, thanks for introducing me to Granny Gumshoe. I like what I see.

Pappy, great Cole art. Thanks for posting. As for me, most of the the things I have done in life that meant something, I did for little or no money. No regrets.

Goodness, Pappy! How could you not mention Elastic Lad?

Daniel, indeed! I will take some shots from a rubber band gun as punishment. Perhaps next time my memory will be more flexible.

DEMiller, thanks for the note!