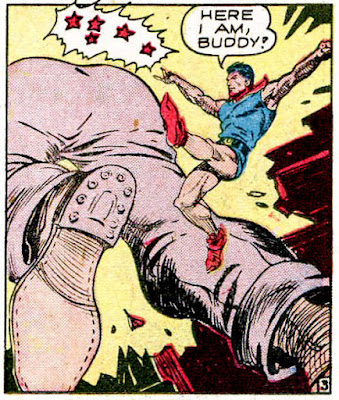 I have shown a lot of Doll Man stories over the years, 17 by my count, including this one. There were several artists who worked on Doll Man. I see the same challenges for any artist where the size of the character against the normal size of objects has to be consistent. The art on this particular early entry to the Doll Man series is by Reed Crandall, but how much of the art I don’t know. Some of the poses are obvious Crandall, some aren’t. I wonder if someone else inked him, and/or if other artists pitched in and helped with some of the pencils. Something I do know about Crandall is that many of his superhero poses ended up in the swipe files of other artists. He was just that good.

Doll Man, who is Darrel Dane when he is full-sized, has a girlfriend named Martha. Later on in the series Martha became Doll Girl, but in the early days she was a typical superhero girlfriend who couldn’t tell her everyday boyfriend was really super. (And he took pains not to include her in the secret.) In this entry Martha gets to kick some butt, and like many other girlfriends of heroes, gets tied up. Truthfully, I was so busy looking at each panel for Crandall poses I missed most of the story. It probably doesn’t matter that much, does it? The most surprising thing to me about the story itself is told in this spoiler alert. If I were you and didn’t want to know, I would skip the next paragraph and go right to the story.

[SPOILER ALERT]: At the end of this story Doll Man, in his miniature form, has to steer a car out of danger and tells the bad guys, "I have a driver's license!" I assume he got his driver’s license as Darrel Dane, rather than as his diminutive alter ego. He would have some explaining to do for any cop who pulled him over as Doll Man. But...wait. On page 7 we see that Doll Man can instantly become Darrel Dane, so when in peril while driving down a narrow mountain road, why not just transform to his larger self? Ah, there’s no dangerous fun in that![END SPOILER] 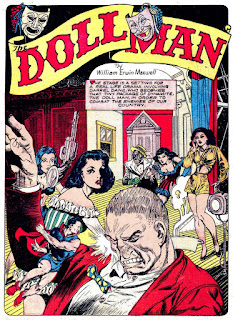 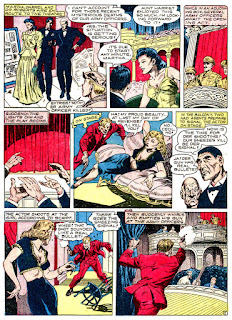 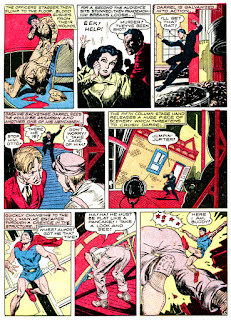 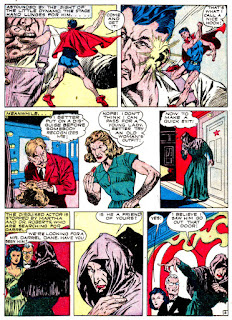 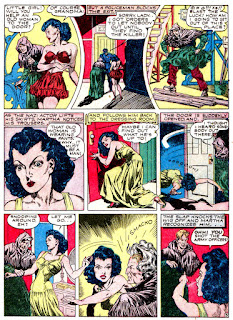 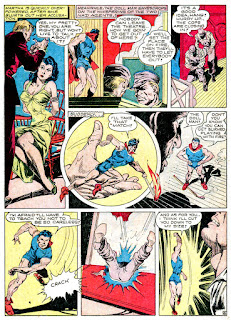 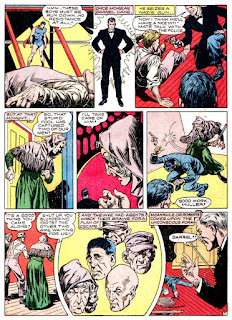 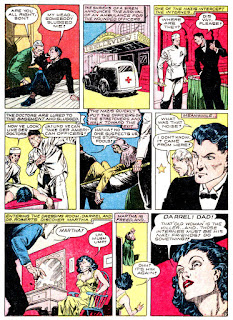 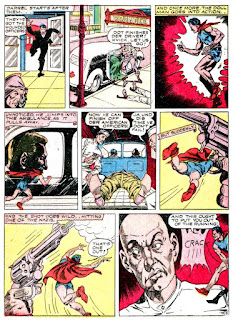 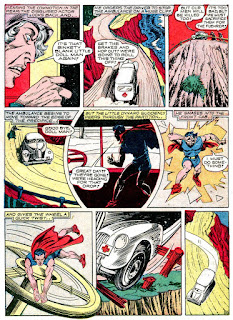 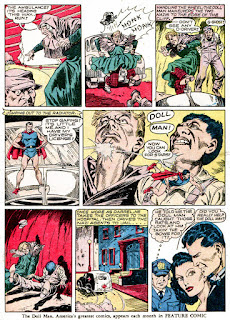 Doll Man may have had a driver license, but one should not driver while small.

I don't recall ever hearing anyone say “Whee!” The closest that I've heard is “Wee!”, and then either as an expression of positive excitement or as an ironic indication of indifference or of boredom. Yet, in this story, one character subvocalizes “Whee!” when shots sound real, and another when he barely escapes being crushed.

Well, whatever we make of these “Whee!”s. The story doesn't hold together very well. Dane seems to have been the only one to leap upon the stage after the attempted killing. The assassins don't bolt the theater immediately. Martha attempts an investigation when the circumstances and evidence tell her that she should summon a police officer. The wounded officers seem to defy the laws of physics or perhaps just those of human physiology and Doll Man priorizes poorly, causing them to be subjected to a protracted and often violent ride before taken to the hospital.

But the drawing is at least largely the work of Crandall, and it's good enough that we'd want to look at it even had the story been sludged together by Elliot S. Maggin.

I look at some of the stuff that Quality was publishing, and I wonder why there was such a sustained difference between the art work in their magazines and those from other publishers. That is to say that I don't know why competitive pressures didn't either cause the work in other magazines to get better in response, or provoke Quality to cut more corners and issue visually weaker work. Even the really good stuff from rival publishers didn't have the elegance that so often characterized the illustrations in the Quality magazines.

Interesting job by Crandall, there's some of the art that looks a little later period Ghastly in there (highly doubt Ingels had anything to do with it) but probably related to the inking. A couple of the women have some more alien like features in panels.

Still, for 42, it's phenomenal. Head and shoulders above other stuff of the time. Crandall would only get better, but sadly he's one of those guys that had a pretty bad later period.

Story follows the 1940s super hero plot. Bad guys appear, hero beats them up, hero's sidekick/girlfriend captured, hero knocked out from behind, hero gets up, rescues person, puts crooks away. You'd be surprised how many of those plots you've published!

Brian, I am acutely aware that many, if not most, of the early superhero stories look the same. I wonder if not for World War II and paper rationing making comic books sell whole print runs, plus millions of GIs wanting something quick and easy to read, if the comic book industry would not have collapsed for no other reason than lack of originality.

And I am not surprised by how many of those plots I have published; what I have tried to do is say or point out something interesting about the era, the story, the artist, the publisher — anything! — that points away from the fact that the story has been told over and over and over.

Dunno who wrote this, but that name under the logo is a Will Eisner pseudonym.

Hello! I enjoy your blog much! Happy holidays! I often wonder if the industry might not have become more creative were it not so easy to sell comics during the war? Just curious if the pulps were also repetitive at that time? I've never read a pulp though I admire many covers. Cheers!