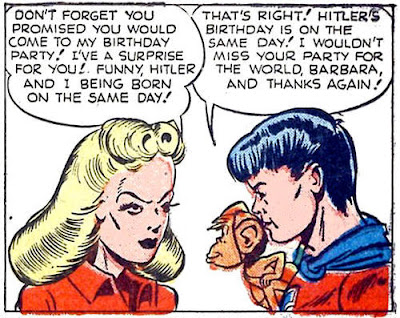 Lev Gleason, who formed the company that published Daredevil,Boy Comics, and Crime Does Not Pay, was one of the original comic book men. Gleason had been involved with Maxwell C. Gaines and Louis Silberkleit in the very early comic book business. Gleason was the first editor of Tip-Top Comics beginning in 1936. He later got financial backing to start his own comic book publishing business, and named it after himself.*

I believe Gleason did a brilliant thing: he hired Charles Biro and Bob Wood as his editorial team, which put his small list of titles among the top sellers all through the 1940s. Biro had a knack for the sort of attention-getting devices in comics. He created a costumed character called Crimebuster by putting a hockey uniform and cape on a boy, Chuck Chandler, who has plenty of smarts and moxie, but no superhero powers. Because of the strong and dramatic storytelling that character sold comic books throughout the 1940s, and only ended when Gleason closed his company in 1956.

“Crimebuster in the Touch of the Leper” is an anti-Nazi story from Boy Comics #5 (1942). I love the design elements of the splash page. Uncle Sam, the Nazi swastika standing in for the “s” in sabotage, all eye candy for the newsstand looky-loos to induce them to part with a dime.** 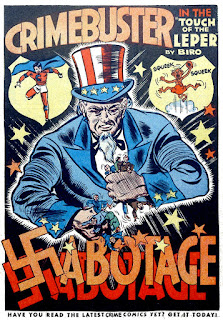 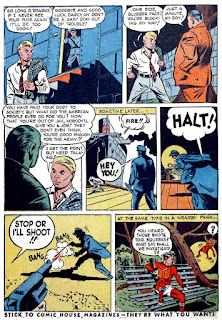 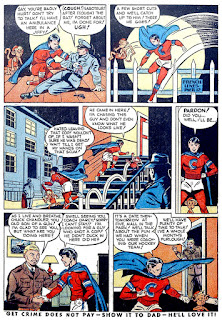 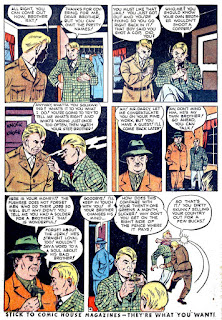 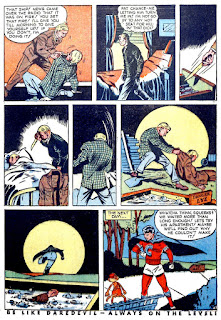 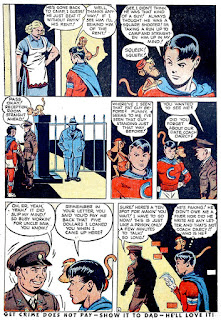 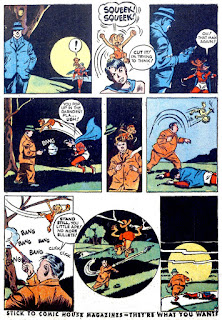 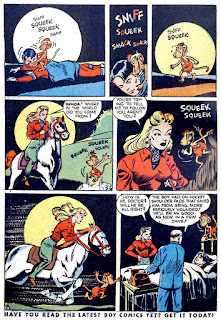 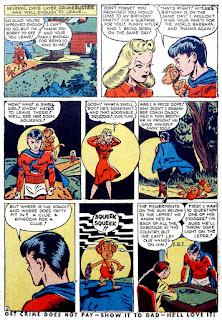 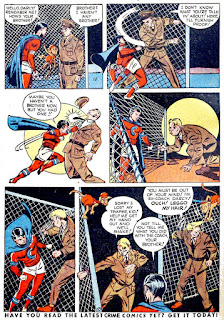 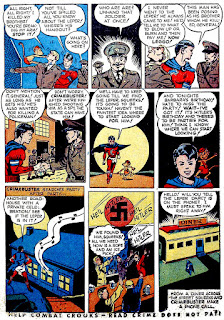 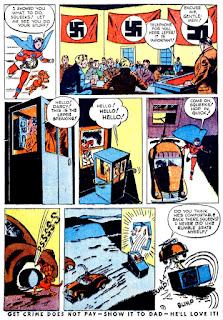 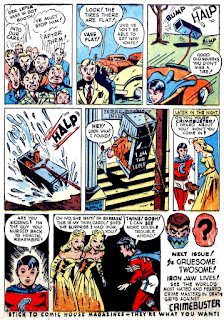 *You can read a fascinating 2010 article from The Comics Journal written by Gleason’s nephew. It tells a lot about the publisher and his left-leaning political philosophy.

**Another trick to get the dimes from kids was the continued story. I am sorry to keep you folks hanging. When you get to the end you will find Crimebuster confronted by gorgeous blonde twins, and the promise of Iron Jaw for the next issue. I don’t have that issue, but you can read Boy Comics #6 at the Digital Comics Museum. Unfortunately for me, it is a fiche copy, and I have enough troubles with my aging eyeballs without trying to read a fiche.

The dialog is ... as the kids say, not me ... wack (I'm hip.) There's a couple places where there's missing dialog between panels. It's just weird; it doesn't need to be there, you can just re-arrange the dialog a bit to fix the problem. But I guess editing wasn't all that important for the concept of disposable comics.

I love the little blurbs on the bottom, Marvel was doing that all the way up until the 70s at least, it was always fun to get to the bottom of the page and see very Stan Lee-ish (but obviously written by staff) stuff like "The Thing finally meets his match ... it's the wrecker!" etc, etc.

Brian, putting those messages at the bottom was a cheap way to get in a plug. In Guns Against Gangsters, edited by L.B. Cole there were bottom-of-the-page messages including my favorite from issue #6: "Evil men appear in these stories, but 'they get what's coming to them.'" I think that was to assuage a parent or a critic of crime comics that this crime comic was okay. I don't think anyone was fooled.