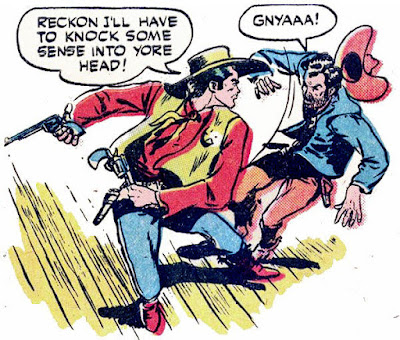 A Google search for Bat Masterson shows photos of him as a dandy wearing a derby hat. The “Bat Masterson” shown in this biographical story from ME’s GUNS of Fact and Fiction (1948) ( #13 in ME’s A-1 series, but actually the only issue) is more the standard Westerner, big cowboy hat and all. Photos of Bat Masterson show him as a natty dresser, and that was the image in the 1950s television series starring Gene Barry. 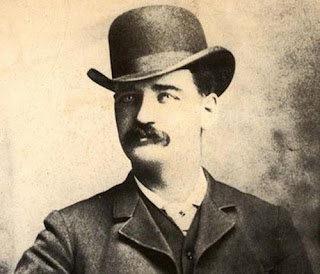 In The Old West: The Gunfighters from Time-Life Books (1974), I read the following about the flamboyant Bat Masterson: “When he first came to [Dodge City], he sported a Southwestern sombrero with a rattlesnake-skin band, a scarlet silk neckerchief and Mexican sash, gleaming silver-plated six-shooters in silver-studded holsters and a pair of gold-mounted spurs: an observer on Front Street suggested that all this finery might give Bat an edge in a gunfight by blinding his opponent.”

He liked attention. The claim of 40 men killed by Masterson is an exaggeration by dime novel writers of the era. Bat did get involved in some gunfights. He was a sheriff of Dodge City, and his brother Ed was killed in a gunfight. He was one of those lawmen who didn’t always observe the law. He never landed in prison, though, and worked his way through the West, including Texas and Colorado, before settling in New York in 1902. After a time as a boxing promoter and writer, and an appointment by President Theodore Roosevelt, Masterson wrote a column for the New York Telegraph. He died in 1921, not in a gunfight, but of a heart attack at his desk.

Graham “Ghastly” Ingels drew “Flame of the Frontier” which is another of those stories told by an inanimate object, in this case a pair of six-guns. Ghastly later became famous for his gothic horror tales for EC Comics, but before that he spent years in the comic book badlands, doing jobs like this. 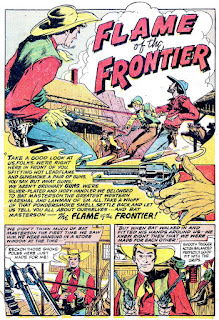 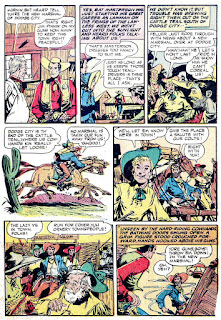 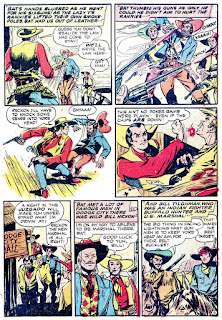 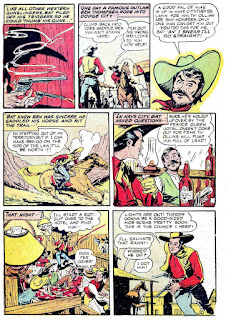 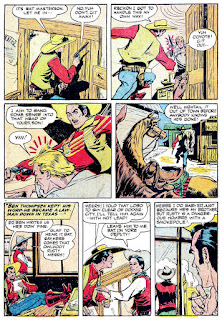 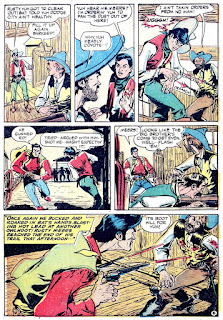 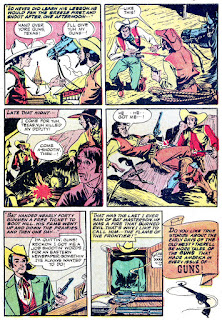 Email ThisBlogThis!Share to TwitterShare to FacebookShare to Pinterest
Labels: Bat Masterson, Graham Ingels, GUNS of Fact and Fiction, ME Comics

I giggled every time the story said "smoke pole!" I thought the first time nobody would be silly enough to say it again, but sure enough ... smoke pole! And then one is "smokepole."

Ingels does a fine job, here, and I think he was well suited for western tales. I know he struggled in other types of comics but it works well here. Still a year or so from his natural fit, horror comics.

If TMC did a blog about comics, this would be it! :) Love the info about Graham Ingels and even more about Bat Masterson. Many thanks.

Brian, what? You don't call guns smokepoles? I think we should start a lobbying organization, the National Smokepole Association.

Neil...**cough*** Sorry, I don't know what TMC is, so please enlighten me. I'll probably kick myself for not knowing. (Please remember that often while my body is in drive, my memory is in park.)

Thanks for your thanks. I am the first to admit I can be pedantic, but I like imparting information. It's almost like I am performing a public service, here, and I feel less guilty about the amount of hours I spend reading comics.

Alicia, if only I had my old Devo "Duty Now for the Future" t-shirt, but it became a rag when I wore it out in the early '80s. I would love to have Gerald sign it.

TMC is Turner Movie Classics. Sorry. They show classic movies, sometimes with an intro which includes info and some tidbits historically about the movie following. Much like your blog to a certain degree.