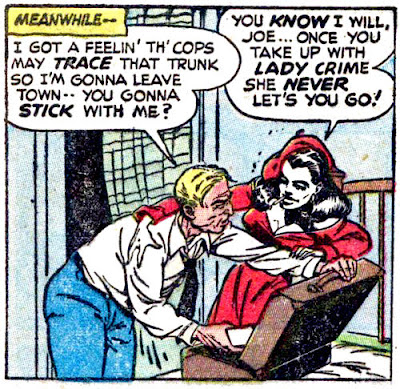 Lady Crime is a character who popped up in a few Harvey Comics of the 1940s. This particular story is from Kerry Drake #6 (1948), and features art by the inimitable Bob Powell and his assistants. If I wanted to make a statement about sexism I might say that presenting crime as a beautiful. seductive woman is more in line with beliefs that women should cover up because men go stupid from the mere sight of a woman — and a female’s power over them. But, I don’t want to get into that right now. So why did I bring it up? Probably because of the uncomfortable feeling I get when I think of the power some women had, and still have, over me. 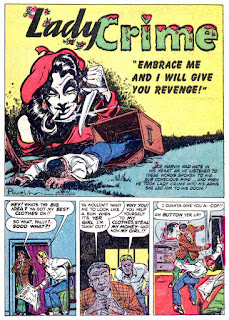 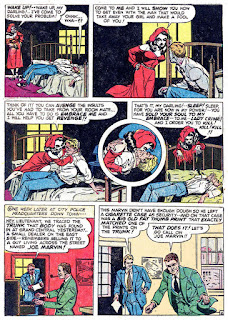 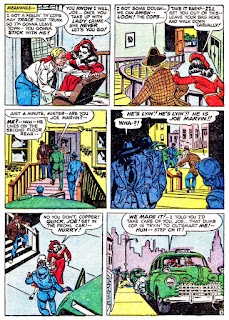 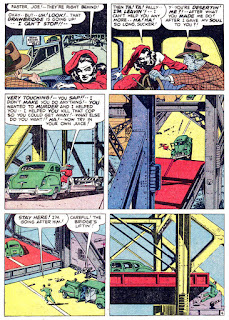 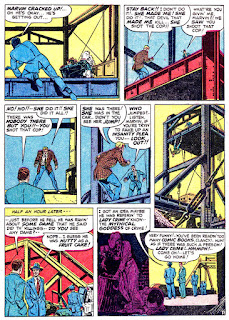 "Now try in your own juice"? Was that supposed to be "fry"? And I thought Joe talked funny ("I oughta give you a--oof!" "We can awgh"), but Lady Crime has him beat. Not only did Powell come up with some humdinger lines, he (or the anonymous writer) apparently preferred separating compound words (sub conscious, room mate, down town, thumb print) and using the wrong form of "lets" ("let's"). Is my English-teacherage showing?

When it was revealed that Lady Crime had been traveling invisibly by Joe the whole time, I realized who she really was: Mr. Crime's wife!

How did Lady Crime, an obvious spirit, take damage leaping out of the car? She can obviously disappear, it previously happened! Damn it, comic book people!

The story, eh, not much there. I do like the visuals, though. Powell as always does a great job, and the black and white nature of Lady Crime (in a bright red dress) is a good one, it really leaps off the page.

Brian, a good description of Bob Powell's art is that ability to make characters "leap off the page," as you aptly put it.

Powell at least tried to have some control over the coloring. Original art I have shown before (see "The Rat Man!" shows how he used a light blue watercolor wash on his originals to indicate emphasis he wanted in the coloring.

You caught the inconsistency of Lady Crime disappearing, spirit-like, in one panel and yet sustaining damage in another. Where was the editing on this strip? (A rhetorical question.)

Ryan, yes, your English teacher creds show here, but good for you. We could allus use some larnin' in good English talkin' and writin'.

At some point were those compound words (or even some of them) separated by hyphens? Like "sub-conscious" or "room-mate"? Remember when the words "to-day" and "to-morrow" were hyphenated? I have seen that as recently as works written in the thirties and forties. I think if the writer was going to separate the syllables like he did in the Lady Crime story I might have given him a pass had he used hyphens. It shows the story needed some serious editing, just like the lapse Brian Barnes mentioned in his note.

Kind of a female version of "The Man in Black (called Fate)."