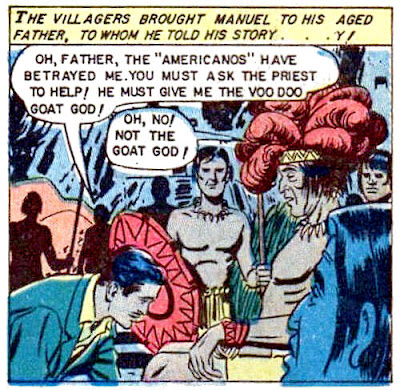 Our story today of a goat’s curse is set in a strange south-of-the-border land with swamps and medicinal herbs. It has a wronged drug company employee, Manuel, going to a voodoo man to lay on the curse of the goat. The confusing geography with a Haitian religion mixed in is not found on any map. But I wonder if the writer was familiar with the urban legend of the Chicago Cubs’ goat curse?

No artist or writer identified by the Grand Comics Database. The story is from Mysterious Adventures #10 (1952). 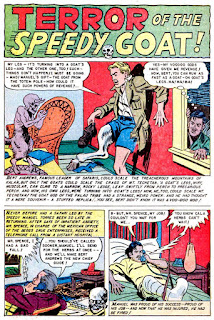 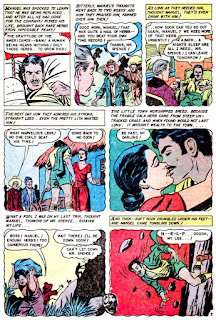 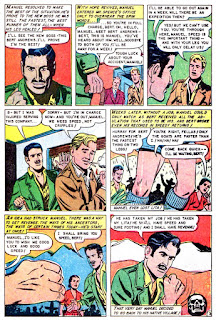 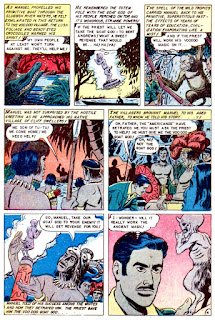 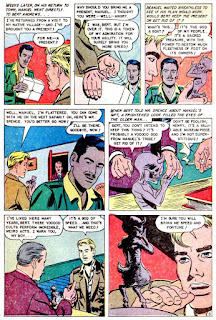 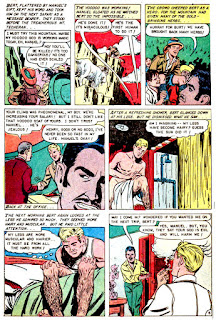 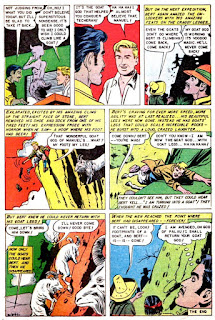 Who will disgrace us all with a “got his goat” joke?

There's so much to talk about in this one, but I can't get over the constant reiteration that men's legs are key to everything.

Hi, Pappy! It's been a long time--I missed your blog.

I enjoyed this story. The only thing I have to say about it is that I think Manuel's revenge should have been on the cold-hearted boss who fired him, not the poor sap who took his place. Or maybe he should've avenged himself on the fickle Lita. At any rate, the ending was unsatisfying for me because: either Manuel should've gotten revenge on Mr. Spence or he should've gotten his comeuppance for using the goat god in the first place.

Daniel, don't be offended, but you got my goat by asking for a joke.

Ryan, I've been wondering where you had gone.

I'm making a literary judgment here, but with its odd setting and premise I think this story slipped over into something that could have been hallucinated by one of the characters. At least it didn't seem to belong in any reality I could relate to.

By the time the ending came up I didn't really care. I was just relieved it was over.

Brian, I never ran, but for several years I had great gams. I walked all day on my job, walked for exercise with my wife. I wore shorts and was proud of my muscular calves. Since I retired my muscular calves have gone flabby and slipped down into my ankles. Once you build 'em up you gotta keep 'em up!

I couldn't help thinking the same ting as Ryan Anthony. Not only is Bert far from a black and white villain (even if he's tactless when he and Manuel first meet), but Manuel gets no comeuppance, which has to be pretty rare in these kinds of stories.