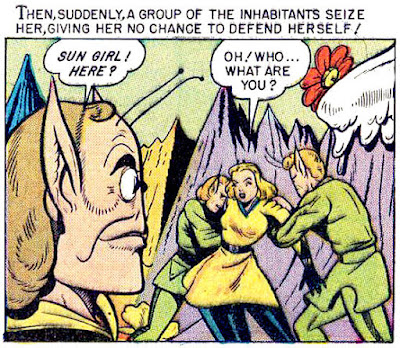 Sun Girl was one of a handful of female superdoers that Timely/Marvel Comics published after World War II. As mentioned in Don Markstein’s Toonopedia, Sun Girl’s powers were ill-defined, even though she had a three-issue run of her own title, and appearances in that publisher’s flagship title, Marvel Mystery Comics.

In this episode, from Marvel Mystery Comics #89 (1948), some odd-looking phantoms appear on the streets of New York, and Sun Girl is drafted to go after them. They have already cost one man his life, but plucky as she is, she goes into their dimension after them.

The Grand Comics Database lists Mike Sekowsky and Carl Burgos as artists. With this issue Marvel Mystery had just a couple of issues left to go before cancellation. The core group, Human Torch, Captain America and Sub-Mariner were still appearing in the title, but the comic book that had launched the publication company that later became Atlas Comics and then Marvel Comics, was gone before the 1950s began. 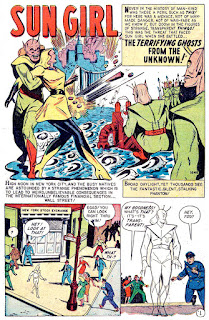 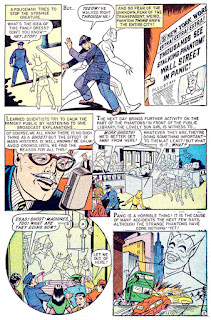 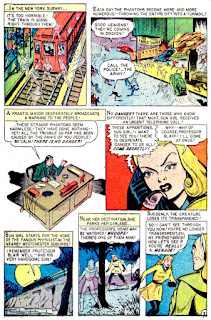 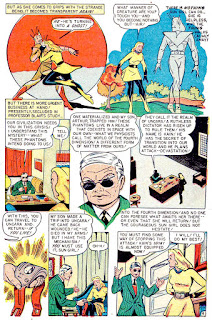 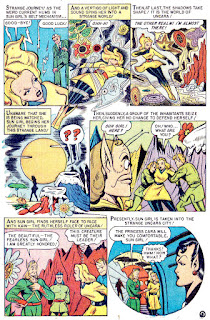 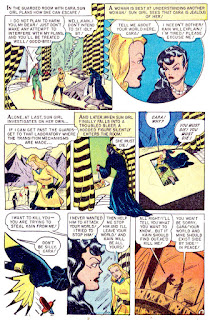 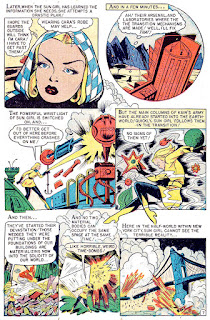 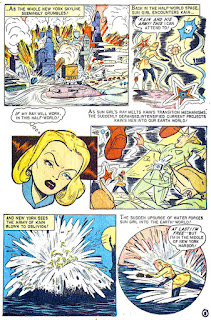 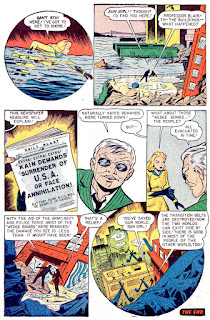 "A woman is best at understanding another woman", yet Sun Girl understands next to NOTHING about the queen. Also, our aliens are, well, alien looking but damn it, the artists has to make the queen sexy. Weird evolution in the 4th dimension!

As I was reading I was wondering what they were going to do about the mass destruction, which they just hand waved away at the end. The thing is, for a lot of super hero comics of that time and even now, mass destruction is a potent image but you can't blast down NY every issue. So the hand wave.

I feel they missed an opportunity to show Sun Girl and the queen wrestling for the dagger. :)

Brian, at least with that "weird evolution in the 4th dimension" the alien woman has the Spock ears...she's just lacking the flat face and Moon Mullins eyes of the males.

Isn't mass destruction to NYC what we see in superhero movies? I remember that city taking the hammer blows in the old Marvel Comics, too. I remember thinking it would be tough going to work when super people were knocking pieces off buildings while dealing blows to one another.