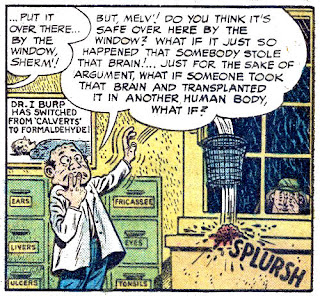 During my major collecting days it was not enough for me to have original EC Comics, I had to have all the reprints, also. That included the series of annual Mad Specials published in the 1970s which included bound-in copies of The Nostalgic Mad, reprinting the best of the comic book Mad by Harvey Kurtzman and artists Wood, Elder, and Davis. Not only did I have to have the Specials, I would buy copies of The Nostalgic Mad if I found them in bargain bins. (Separating them from the larger Mad Special in which they came often caused damage, making them relatively valueless as collectibles.) 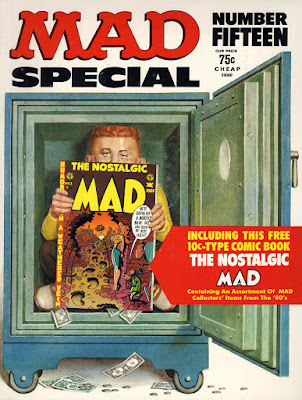 My obsessive-compulsive collecting is mostly over. I say “mostly” because I just found a copy of Nostalgic Mad #3 (1974) in a bargain bin for a dollar, and my old OCD came right back. I just had to have it. The collecting compulsion can still strike at any moment.  At this stage in my life at least I know what compels me. 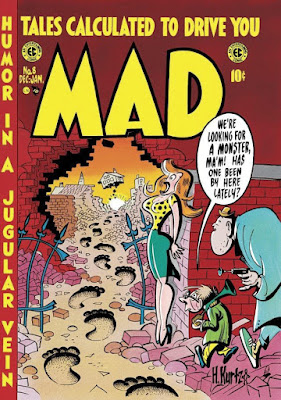 I especially liked this issue because it has one of my favorite Kurtzman Mad covers, pictured above, illustrating “Frank N. Stein!” illustrated by Will Elder. Scans of the story are from the reprint itself, the cover I swiped from Heritage rather than dig my copy of Mad Special #15 from its place in my (shudder) basement. My basement storage is my Frankenstein monster, built over the years from my collecting OCD, and like Frankenstein’s monster, will undoubtedly be my eventual undoing. 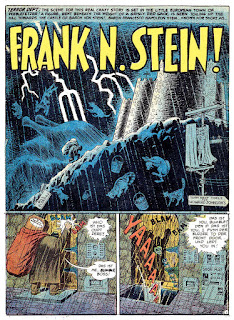 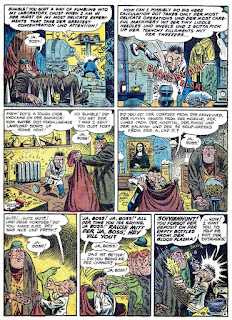 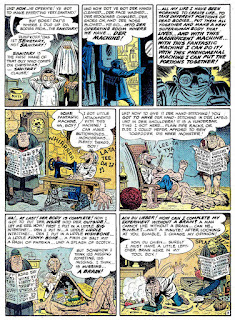 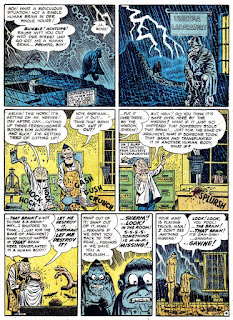 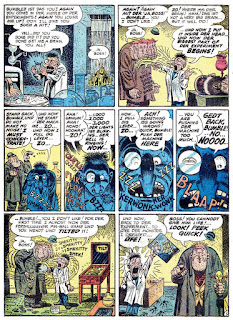 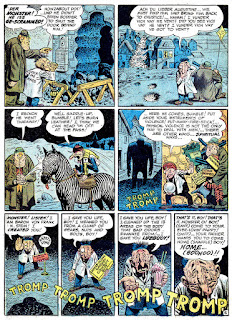 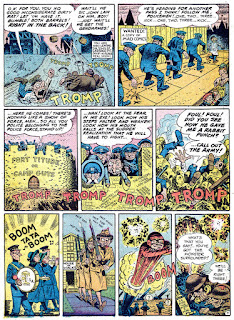 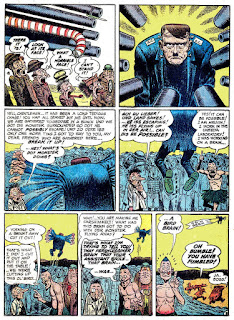 A fun Kurtzman script, he had the pacing of these things down to a science at this point. Elder's art is fun, especially as Kurtzman liked to hand him off the "closer and closer ... then gag panel" which Elder was great at.

Everything being stolen from the lab is probably the best gag in there. Fun visual stuff, like the newspapers (Kurtzman was pretty strict with the layouts at times, so it's hard to tell who's gag that was.) The ending though, ugh :)

There's also a lot of stuff that's really dated in here, which is hard to stay away from in comedy. The old style heat registers (yes they still exist in old buildings), the lifebouy soap joke (does that still exist, too lazy to google!) and a couple others.

Brian, a quick check shows me that Lifebuoy is indeed still being produced, although they make clear it is not to the original formula (with "phenol" — whatever that is, and please note, I don’t care what phenol is. I’m a Coast soap man, myself, and Coast soap, please contact me so I can tell you where to ship a case of Coast as payola for plugging your product.)

As you point out, dated references are an unfortunate part of comedy, and I find myself baffled by references in modern comedy to things even a couple of years old. However, Mad parodies were part of my growing up, so they tend to have stuck in my mind.

You give an "ugh" to the ending and I give the same ending a "bravo, brilliant!" rating. All to one's taste, but I find a bird-brained Hitler flapping away very funny.

My original exposure to the Kurtzman Mad Comics was by way of the Ballantine Books paperbacks, which were greyscale; they were something of a revelation for me (I pored over them), but the look was plainly very different from the original publication. I think that I later saw one or two stories produced in color, with the original lay-outs, before Mad Magazine issued its occasional bound-in reproductions, but I chose not to spend my limited funds on the sets of reproductions that started to become available (nor did I buy the original issues), and those bound-in reproductions were where I first saw most of those stories in color &c.

As to the dated references, I don't know how I would have felt about them at a different age in a different time, but most of them made the comics more interesting for me. (I don't know 'bout you, but when I read a new magazine I skip the ads, whereas when I read an old magazine I look at each and every one.) However, the Lifebuoy joke didn't do it for me because it was a cheap pun involving a familiar brand!

Phenol in the soap?!? Geez!

Daniel, I think that "I gave you Life, buoy!" may have been an old vaudeville joke.

I was lucky that at the time Russ Cochran was making the complete EC comics line available in reprint form I had the extra disposable income. Seeing as I had so many reprints of Mad I thought I wouldn't need the slip-cased collection, but a young collector sold it to me for half-price. He didn't like the old Mad comics...he did not understand the satiric references.

I have said before that seeing the Mad Reader from Ballantine Books in 1956 changed my life. From that paperback book my love of and compulsion for Mad was created, and is with me still.

Yes, I read the old ads in magazines. They give a reflection on the times they were done that is often more indicative of the era and its attitudes than a straight history.