Number 1934: By vacuum spiral to Mars 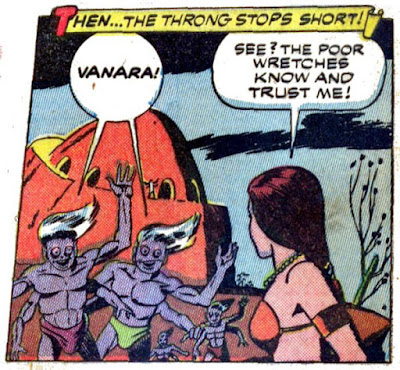 A “secret current” has turned Brad Spencer into Wonderman. Any good superhero needs a villain, and Wonderman’s main villain is Dr Voodoo. Dr Voodoo has invented a “vacuum spiral” for instant travel to other planets.

Since I haven’t read Wonderman’s origin story I’m not sure what any of it means or how it works, but in the 1940s someone did. Wonderman appeared in the four issues of Nedor’s Mystery Comics, and then Wonder Comics. The art is by a young Bob Oksner, who went on to comics fame with funny comic books published by DC, Jerry Lewis, Bob Hope, and others.

In this story, from Mystery Comics #3 (1943) a race of primitive Martian dullards had a genius born amongst them “thousands of years ago.” The genius, Yondok, looked at Earth through his atomic telescope and decided to duplicate the climate and atmosphere. After that this particular group of primitive Martians evolved into humans, and by the time Brad and his girlfriend arrive on Mars the Martian/humans not only speak English (!!) but have subjugated the unevolved Martians. I’m not sure I how any of that works, either. In the main no one cares, and certainly not Brad, because in best comic book fashion Wonderman handles the problem the way he knows best, mano a mano. In comic books there is no time for diplomacy; every problem is handled wth guns or fists.

It’s not a scene from the story, but the nifty cover is by the master of action covers, Alex Schomburg. 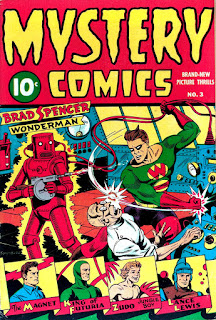 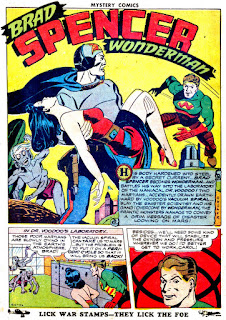 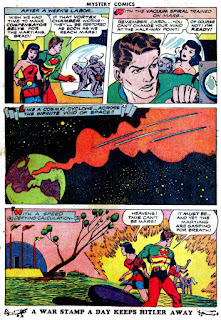 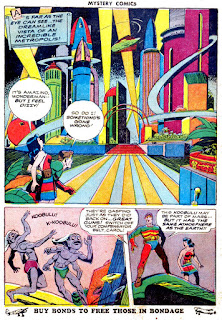 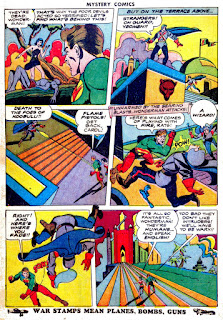 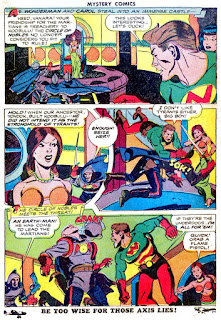 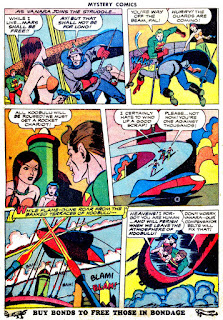 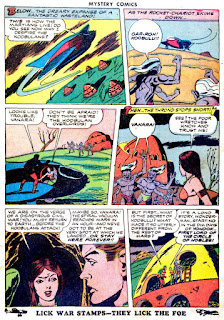 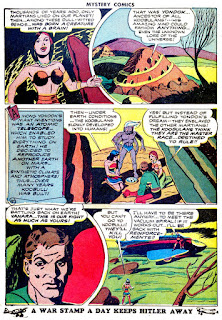 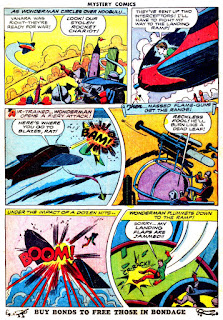 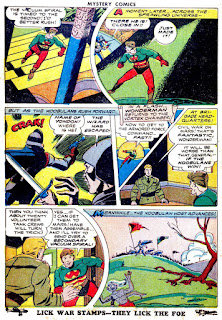 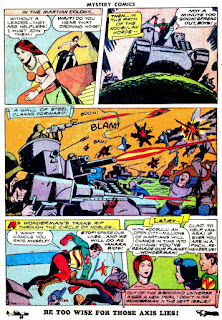 I showed another Brad Spencer Wonderman story in 2013. Just click on the thumbnail. 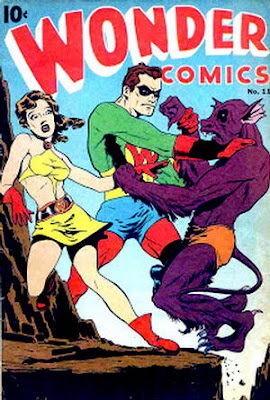 While I realize that there have been many analogues to the Vacuum Spiral, I am foremost reminded of Adam Strange, travelling on the Zeta-Beam to Rann.

The four-armed Martians, meanwhile, remind me of the Green Martians of Burroughs. I'm not sure why an Earth-like environment should imply environmental pressure to lose two limbs! (Now-a-days, such limbs would be seen as if a wonderful body modification.)

It's interesting to see Oksner's work before he had caught his stride.

So, Wonderman's solution to this obviously racial problem is to covert the "dumb, dim-witted" race into the "smart good" race.

We seen lots of super powers, but I think the most impressive one is to just show up, demand an army of tanks and men, and have them all immediately, without question, zap to another planet and steamroll a city.

Slightly off topic, but that early pre-Ghastly Ghastly cover is great. He got pigeon-holed to horror but his sci-fi was top notch, too.

Daniel, that good old Zeta-Beam. And he had it figured, wherever it was gonna appear he was gonna be there. In those pre-computer days that was quite a feat. But, with a babe like Alanna on the other end of the beam...well, maybe he couldn't find girls like her on Earth.

In retrospect I wonder if Adam Strange wasn't a jonah...everytime he beamed to Rann there was some terrible menace he had to take care of.

Brian, that's a lie that is hard to kill, that someone of a different tribe (or race) is automatically dumber than you by virtue of where they fit into our collection of diverse humanity.

I have even seen Ghastly's illustrations in old pulps, like Planet Stories. He worked for Fiction House, too. His work is instantly recognizable no matter where he worked, or what he was drawing.

Wondy's origin was in COMPLETE BOOK OF COMICS AND FUNNIES #1, which nobody's gotten around to scanning yet.