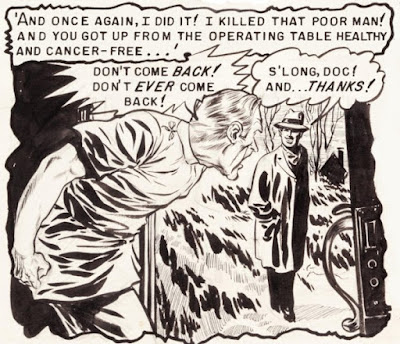 Graham “Ghastly” Ingels’ gothic and moody artwork for EC Comics can still send a shiver to anyone encountering his work for the first time. But Ingels struggled with alcoholism, and it was (according to some) at EC that his drinking got worse. In an article in Filmfax Outré #5 (1996), author/interviewer Don Vaughn tells of Ingels’ drinking: “Ingels quickly became one of EC’s premiere [sic] talents, drawing the lead story in . . . Haunt of Fear, secondary stories for the two other horror title and the occasional crime tale. It was a grueling schedule, but Ingels was fast with a brush and had little trouble keeping up, says fellow EC alumni [sic] George Evans.

“It was during this period, associates recall, that Ingels’ drinking started to get out of hand. His work never suffered, but he occasionally missed deadlines, forcing EC editor Al Feldstein to give him advanced deadlines so that publishing schedules wouldn’t be affected. Sometimes, say friends, Ingels would disappear for days at a time — often with the completed artwork under his arm. Amazingly, he never once misplaced it.”

In the article Evans describes a ride home with Ingels after Ingels had imbibed several beers. “We would be tearing along at 65 miles per hour on the parkway and I would see lights a mile ahead and he would suddenly hit the brakes. Then we would be approaching traffic and he would put his foot on the gas pedal. At a given point, I would say, “Hey, Graham, you’re coming up on that pretty damned fast!” And he would say, “Not to worry, George, I’ve got everything under control.”

So Ingels drove drunk. He is lucky he and his passengers — or innocents in another car — didn’t end up looking like the cadaverous creatures he sometimes drew. As the article goes on, in later life Ingels backed off drinking so much, but by then it had ruined his marriage and his relationship with his children. Before he died in 1991 he reconciled with his daughter, but not his son. Alcoholism was the horror story Ingels lived. But there is some sort of happy ending: Ingels became a respected art teacher in Florida, and author Vaughn quoted some comments from Ingels’ students praising his teaching and artistic ability.

In a more traditional sense, Ingels’ paper nightmares, those he drew for EC Comics, are readily available in various forms, deluxe hardcover compilations to the original pre-Code comics to reprints of those comics. In the case of “Nobody There!” from Haunt of Fear #16 (1952), these are scans of the original art I am posting with grateful approbation to Heritage Auctions, who sold these eight pages for $28,680. 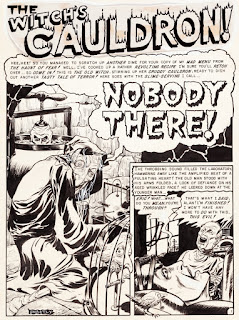 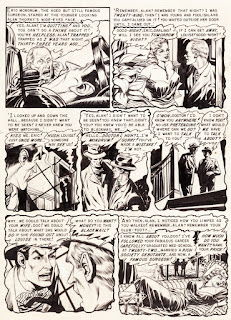 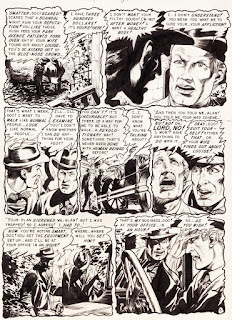 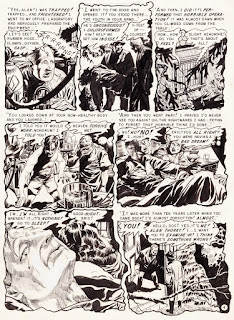 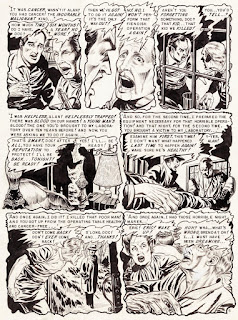 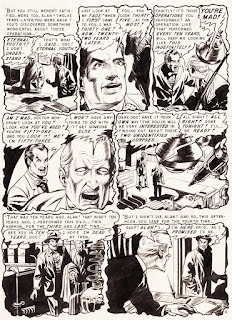 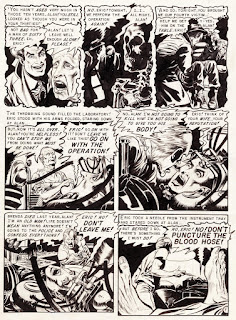 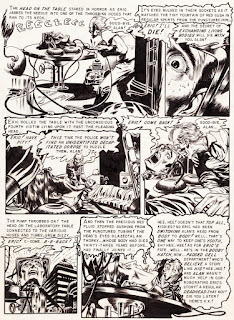 I notice that, across many stories, Ingels tends to feminize the appearances of the male characters who are to be seen as the principal villains. I wonder to what extent this depiction were a willful choice.

Jeez, Daniel. You notice things I don't. Now I'm distracted by feminized-looking villains in Graham Ingels' stories. I'll be noticing them from now on.

I think nearly all of his younger male characters had the same soft facial features that you are referring to: narrow nose, pointed chin, thin eyebrows and full lips. That is, at least for his EC horror work. There are a few examples of Pre-Trend and Pre-EC work where his male heroes are slightly more masculine. If anything, his villains tend to have some sort of disfigurement that discloses their moral inclinations i.e., hook nose, gaping mouth, jagged teeth, gaunt hands, etc.

OMG 28 thouzend dollers-- thats a XPENSIVE BLOG POST Pappy OMG! Drunky Drivering didn't kill no1 back in tha 50s, thats when drinkering was funny yo! Like on Mayberry!

Deb sez hi, she's covering a Monkees song 2moro that has alreadery bin dubbed "groovy" by Gary Sohmers of Antiques Roadshow but she's still 2 afraid 2 come on ur blog 2 tell u until u get 667 members.

Alicia, the number of followers dropped to 665, so Deb missed her window to comment. Then it went back up to that devilish 666. No telling when I might lose or drop a follower. It's 666 I write this. Losing or adding followers is for me like when I used to lose or add a girlfriend...admittedly long ago when the Monkees and I were still fresh and new...and groovy, as Gary sez.

Billy, the old cliché is that evil wears its looks on the outside, but in Ingels' case at least, the evil has a softer look.

I wasn't claiming the Engels necessarily drew his principal villains as pretty. Consider “Horror We? Ho's Bayou?” If it weren't otherwise clear, the principal villain is identified by whom the victims attack, Sidney, rather than

Micky Dolenz liked our tweet about tha song 2day but we got a biggerer problem now cuz we got 66.6 thousand followerers on twitter & so now Deb won't do her job on tweeter 2day CLICK 2 C So now we gotta get more followerers or loose followerers or she thinx she gets a free off day yo ucchh >:(

I've read that Ghastly's drinking potentially was caused by his religious nature vs the things he was drawing. I've read that in a couple places; it could be true, but it always struck me as a little weird, he was the one who embraced the Ghastly name.

And he wasn't the only EC artist with a drinking problem, sadly.

I don't think Ingels was feminizing his villains, that was very much his brush style, you'll see the same kind of stuff in his earlier western tales. That's why, for a long time, Al and Bill weren't happy with his work but kept him on because they were loyal, and also lucky, because when the new trend started, Ingels found his place and nobody, I don't feel ever, will top that work.

Even when Al turned in a stinker (and I love EC, but let's be honest, Al was writing a lot of snap ending stories and they weren't all gems) Ingels could save it.

The amount of cognitive dissonance it would require to continue working on something that compromised your morals for such a length of time would be immense. There is such an absurd degree of passion prevalent in the New Trend material compared to any of his other work that I've seen that I find it highly unlikely that Ingels was suffering from a deep crisis of morality over his job at EC. It's possible, but improbable. At least not during his time with EC. I think any issue he had came after the fallout of the Kefauver Committee hearings.