Number 1932: Men — and one beautiful woman — from the future 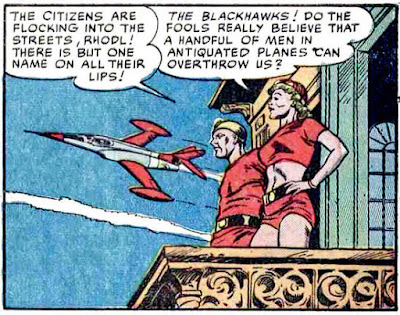 Chop Chop, the racist caricature, flies to the rescue of his Blackhawk team mates in “Men From the Future,” the lead story from Blackhawk #47 (1951). We see him fly over singing his version of the Blackhawk fight song: “Ovel land, ovel sea, we fight to keep men flee!” (Ugh.)

Chop Chop flies between buildings, all the better to drop a bomb on the enemy. Good ol' Chop Chop...he gets to fly to the rescue, but in those days didn’t even get to wear a Blackhawk uniform!

Pencils and inks by Reed Crandall, as per the Grand Comics Database, with the story by William Woolfolk, as per Martin O’Hearn, who identifies artists and writers in his informative blog, Who Created the Comic Books?. 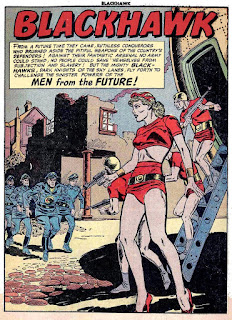 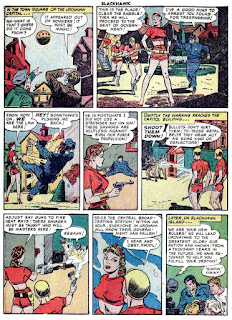 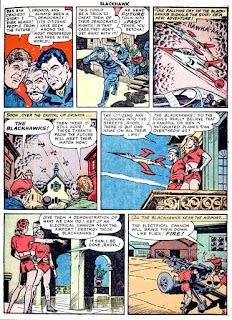 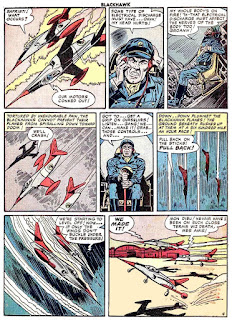 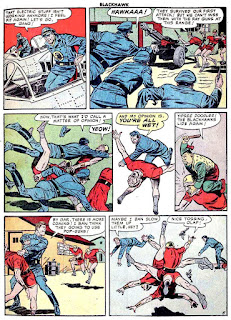 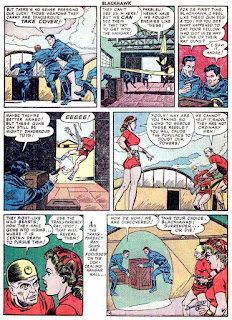 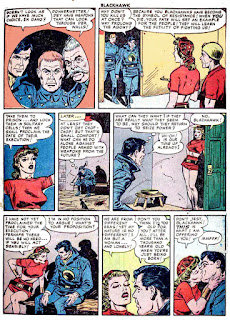 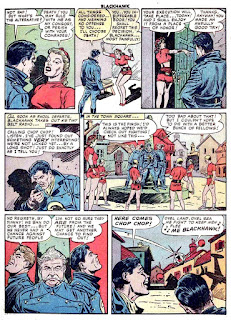 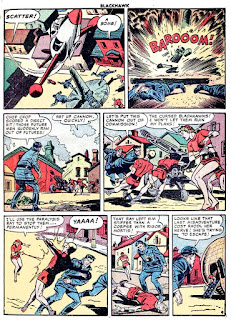 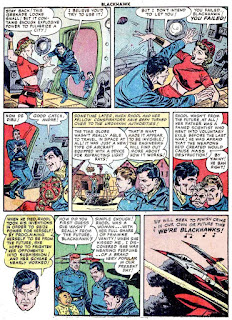 Another story from this issue, shown in 2011. Just click on the thumbnail. 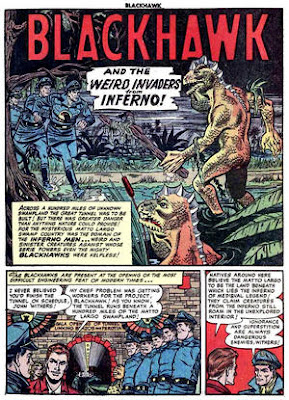 I've read a fair number of comic-book stories with this plot twist, and I guess that there are quite a few that I've not read.

This is one in which the twist really doesn't make a great deal of difference, except in that Rhodl cannot escape into the future. The weaponry has no more or less efficacy.

Meanwhile, as an economist, I have zero fear of our being conquered by a repressive society of greater technological advancement. Repression is incompatible with economically efficient resource allocation, which in turn is required to sustain advanced technology.

Blackhawk's reasoning about perfume is weak. There's no particular reason that a woman from the future could not adopt a perfume from the present, found perhaps in the personal quarters of an overthrown premier.

I'm a little fascinated by old comics characters who appear to be racial cliches in appearance and dialogue, yet are written as fully capable heroes. Whether there are more examples than Chop-Chop and Ebony, I don't know, but I wouldn't be surprised if there were.

When I was a boy in the '60s, Chop-Chop was no longer being drawn like a stereotype, but he still didn't wear the uniform. He and Blackhawk were my favorite members of the Blackhawks because they were the most distinctive. The team became a little blander visually when he began to dress like everyone else.

But I completely agree that it was right to make him a full member of the team.

Daniel, I agree with you on the economic reasons why a repressive society wouldn't advance technologically...except in the case of the Soviet Union which felt it had to keep up with American defense technology. I guess the lesson is it drove itself broke doing it.

Will, it's a bit galling to see sidekicks like Chop-Chop and Ebony represented as these small-size characters, as if they are being diminished somehow. As you mention, they are still capable of heroics, but it seems surprising when they are allowed to save the day, because otherwise they are just comedy.

(In a sort of reverse, if done today these characters would probably be 6'6" tall and have bulging muscles that don't appear in any anatomy textbooks.)

I'm glad 2 no that in the future L8YS will still ware Christian Louboutin pumps Pappy!

The Soviet Union actually illustrates the point. They couldn't maintain an economic infrastructure sufficient for parity in military technology, despite a population roughly equal to that of the US and an enormous territory rich in natural resources. (And if the US had spent less on its military, and left those resources with its taxpayers, then its per capita growth would have been still greater; the Soviet Union would actually have been even worse-off, in relative terms.) They reached for perestroika and for glasnost not because an evil system had somehow promoted good men to the top, but because they saw nothing else as possibly working.

Alicia, and how do you know it is NOT the devil...or the Mark of the Beast? Just tell Deb and that she and you are always welcome at Casa Pappy for a slice of devil's food cake.