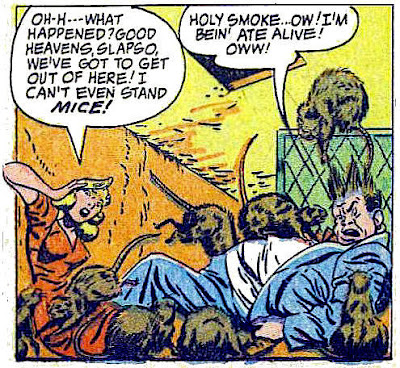 Blonde Bomber was a backup feature in some of the Harvey Comics superhero anthology comics of the WWII era, Speed Comics, All New Comics, and Green Hornet Comics, from which this episode is taken. The Blonde Bomber was Honey Blake, newsreel reporter, who got into adventures with her sidekick and cameraman, Jimmy Slapso. The characters were first drawn by artist Barbara Hall, and then taken over by Jill Elgin. “Horror Rules the Quicksand!” is from Green Hornet #22 (1945). It’s about saboteurs, set in a swamp.

Jill Elgin was the pen-name of Kathleen Jo Elgin, born in 1923. After her time in comics, during a long career as a writer and illustrator of children’s books, she signed her work both with her real name, and occasionally her pen-name. She retired from illustrating in 1975, and after the death of her mother moved to Florida, where she died in 2005 at age 82. David Saunders’ biography of Elgin is in “The Field Guide to Wild American Pulp Artists”.

Finally, does anyone remember newsreels? In the days before television they were shown in theaters. They were the forerunners of television news, although I remember them into 1963, at least, when I saw a newsreel on the funeral of Pope John XXIII. 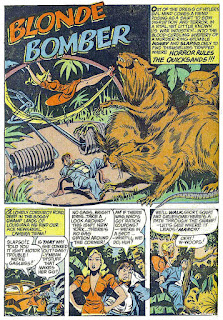 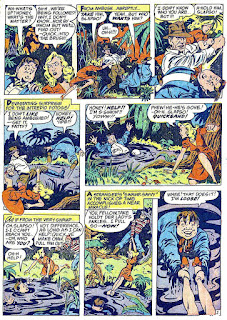 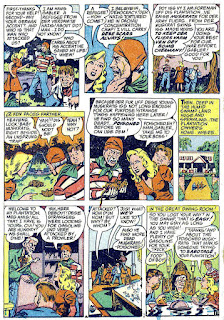 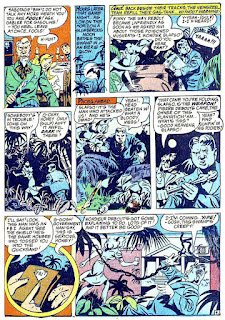 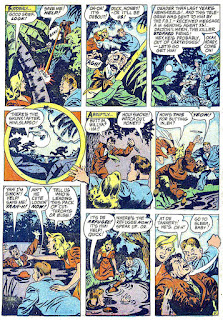 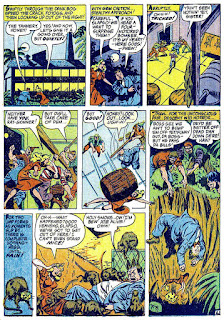 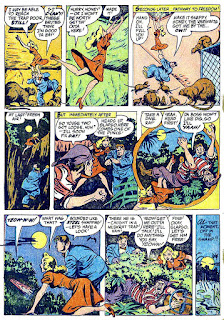 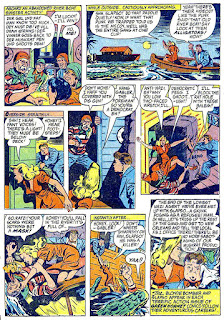 It's a bit surprising to me that the FBI man was depicted as apparently leaving Slapso to die in quicksand. And, after the revelation that the ostensible refugee is an enemy agent, one might ask what his purpose were in effecting a rescue. (The author's purpose was, of course, to throw the reader off the scent; but he or she* has done so by insinuating an unresolved puzzle.)

In fact, the script is, in general, very haphazard, including such things as an unexplained over-reaction by DeBout (the owner); twice using the device of the distress of a gang-member to provide information to the protagonists; the protagonists' not being killed immediately after being overcome simply because the boss is a funny guy; and, at the end, Honey and Slapso expecting somehow to overcome and truss-up the rest of the gang, who were at least four men.

The art is nice. It kind-of bounces-around, stylistically, but not in a jarring manner.

Muskrats actually look more like under-sized beavers (albeït that their tails are quite different) and less like what appears here; but, even if Ms Elgin knew this, she probably didn't want to draw them to seem appealing, even in an era of less acute sensitivities.

Wow, I had never come across Jill Elgin before...what a wild, kick-ass artist! There is powerful energy in almost every single panel. Now I need to pull out what few Harvey comics I have from the period and look for more of her work as well as checking out the Saunders book. Being a few years older than you I remember the newsreels very clearly. The newsreel that played in my local theater started out announcing "the eyes and ears of the world" and everytime my pals and I would yell out "the eyes, ears, nose and throat of the world" and then laugh and giggle and punch each other.

I remember the newsreel being the first thing blasting out of the screen as the first feature back in the early sixties. Followed by the cartoon which usually brought on a riot when Donald Duck or Pluto's mug blasted out at you. Previews were between features and the curtain went back and forth between every single thing, very slowly, I might add. Thanks for the memories, Pap.

Mario, I don't remember as a kid paying much attention to newsreels. I just sat them out, like my visiting grandkids, who ignore news on TV.

The cartoon logos I remember getting the most applause were the Warner Bros. That huge face of Bugs popping up and the "beeeeeee-yooooooop" to start the theme song brought happiness to an audience. I don't remember hearing anything when it was Walter Lantz or Paramount, although I remember my own joy when I saw it was a Popeye cartoon.

Sometimes at the neighborhood theaters the projectionist was late or was drinking or both; the picture didn't start on time, the film would catch fire and stop, the audience would stamp their feet and holler. Movie-going was a spectator sport in those days.

Daniel, I dunno why Grand Comics Database lists the art as Bob Powell. Maybe someone will notice that Jill Elgin signed the story, and they can change their credit.

Mike, as I mentioned to Mario, a lot went on in those old neighborhood theaters of the fifties. This is off topic as to newsreels, but one time we went to a rundown theater to see a Clark Gable movie. Mom had bought a large Ladies Home Journal magazine at the stationers next door to the theater, and carried it in with her. We sat behind what I now think was a homeless guy who had his feet up on the chair in front of him. Mom made some comments about "someone has stinking feet!" but the guy -- who might have been sleeping or drunk -- didn't take the hint. After a few minutes of fussing and fidgeting Mom said, "I can't sit here and smell those STINKING FEET!" She had her magazine rolled up and whacked the guy hard on top of his head. He turned around, then put his feet down, but by that time we were already moving to another part of the theater.

Hi Pappy,
I submitted a correction to the GCD. Some records got scrambled years ago when they migrated databases, and it takes a lot of detail checking to fix them all. I only submitted a change for this Blonde Bomber story, so there might be further corrections needed for other stories in this issue.
Thanks!