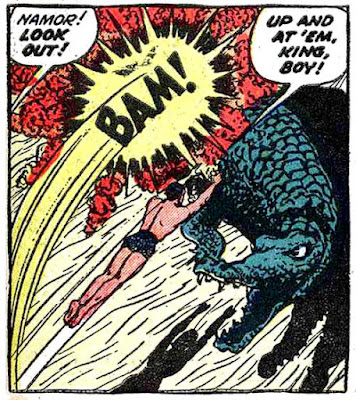 A short but pleasing Sub-Mariner story from the mid-fifties incarnation of Sub-Mariner, drawn by his creator, Bill Everett. A 100-foot croc is roaming about Brazil, so Namor and his gal, Betty, go south to find it. It is probably the only time I have ever seen the cliché, “crocodile tears,” illustrated. That was Everett; he had a sense of humor.

(I am writing this well in advance of the 2016 Olympic Games in Rio de Janeiro, but what folks are worried about in Brazil is a tiny mosquito that can cause a terrible problem. It does not take great size to cause great disaster.) 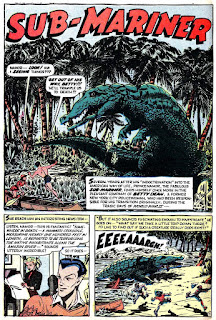 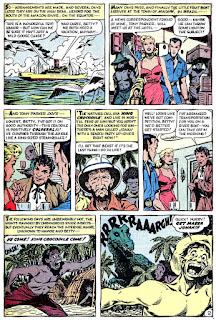 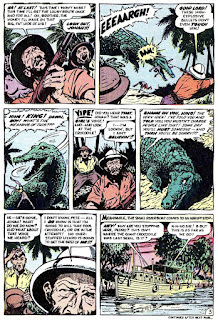 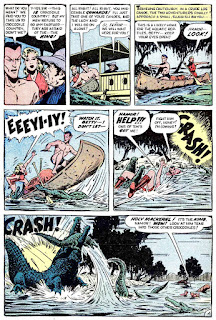 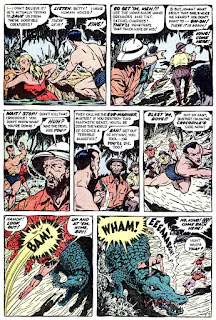 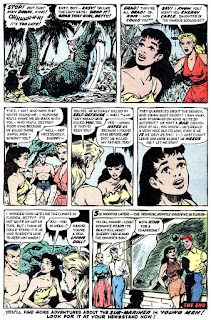 Beautifully drawn, of course. (I continue to marvel at how Everett somehow held onto his talent.) And Everett didn't simply draw beautiful women; he drew them as if he genuinely liked women. Betty, Sherry, Nita,… these were women whom one would want to take to the soda shop, to the ice-cream parlor, and home to meet one's parents.

The story seems mostly a riff on Mighty Joe Young (1949); which, in turn, was an extensive and less grim reworking of King Kong.

As a current reader of these little colorful pamphlets -- a bit more expensive now -- where the sub-mariner is a colossal jerk (and all the better for it, he's a bit bland in the 50s outing) ... seeing him in a sweater hanging out at a house being domestic is pretty hilarious.

I wonder if Dr. Doom had pictures of him like that an uses it to blackmail him?

Still had a thing for blondes, I see (as he was always after Susan Storm.)

Daniel, in that way Hollywood has hardly changed...still taking what worked at the box offices and trying to make it work again...and again...and again. Right off hand I can only think of one crocodile movie, Lake Placid, and even it has several sequels.

But of course crocs are good monster material. I went to the Internet and googled crocodile movies and came up with this list. (Whoever compiled the list does not know the difference between crocodiles and alligators.)

Daniel, I suspect you are much more the gentleman than yours surly. Errr, I mean truly. I never thought of taking any girlfriends to meet my parents, mainly because I couldn't stand the razzing my old man gave me about girls. I didn't have to introduce the girl who became my wife, because she was a friend of the family. (Thank goodness.)

Brian, I believe Sub-Mariner worked better (for me, anyway) as an anti-hero. I loved Kirby's version of the character, and to this day I can re-read Fantastic Four Annual #1, with the Sub-Mariner epic.

The mid-fifties revival, besides Subby kicking some miscreant and commie butt, can look like one of those idyllic fifties views of American life.