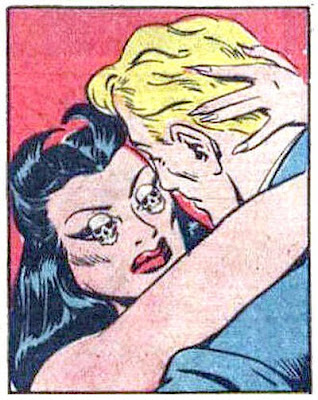 It isn’t hard to see that the writers who created both Madam Satan and Lady Satan thought of women as devilish. In the case of Madam Satan, she is married to the Prince of Darkness himself, and Lady Satan is a “master (sic) of black magic," which has connotations of Satanism.

Ah, but they make good characters, even if both of these Satanic females were not the stars of the comics in which they appeared. Both were short-lived. Madam Satan, appeared in a handful of stories for MLJ during its pre-Archie years as a publisher with a line-up of characters sure to displease parents, teachers and the censorious types looking at them. The Lady Satan shown here is actually the second of two characters with that name, the first having fought the Nazis in France, this Lady Satan fighting supernatural menaces in the post war era. This lady also had a short-lived comic book career, appearing in comics published by Harry "A" Chesler.

These two episodes of Madam Satan were published in Pep Comics #18 and #19 (1941), with artwork credited by the GCD to Harry Lucey. The werewolf story starring Lady Satan appeared in Red Seal Comics #17 (1946), The artist isn’t identified. Lady Satan had her mask whited out when the story was rewritten and published as “The Werewolf Howls” for St. John Publishing’s  Weird Horrors #1 in 1952. 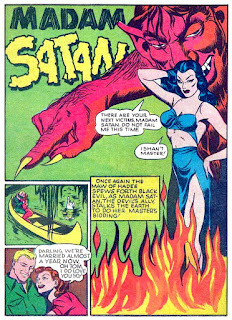 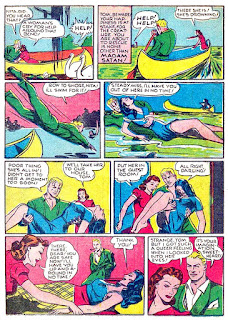 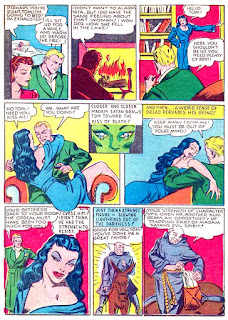 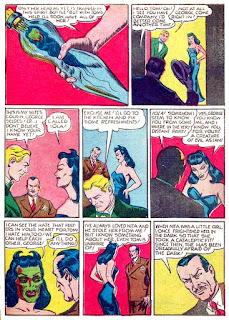 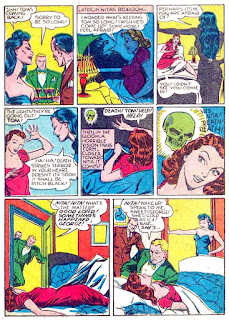 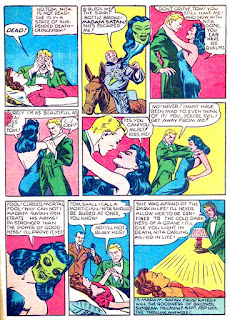 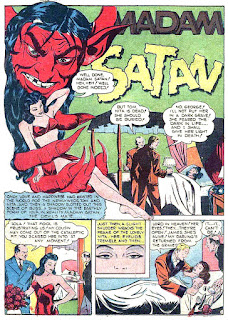 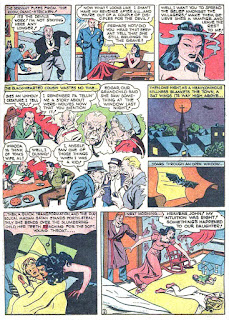 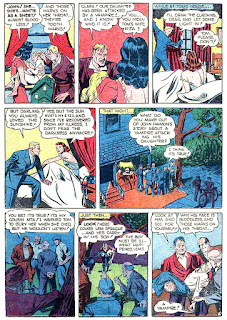 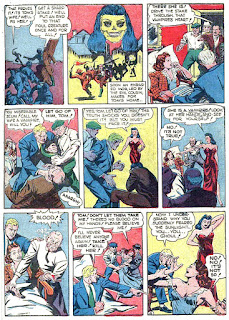 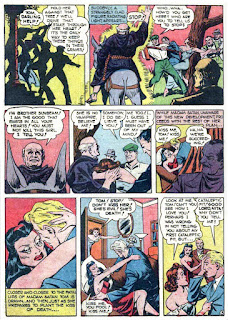 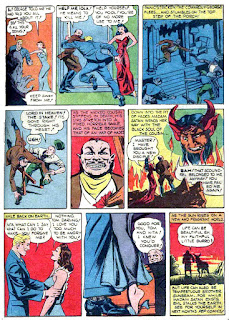 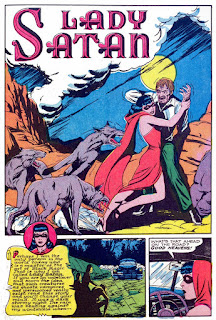 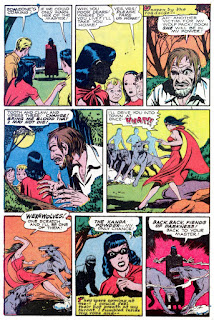 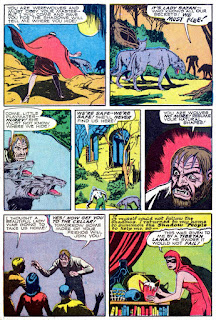 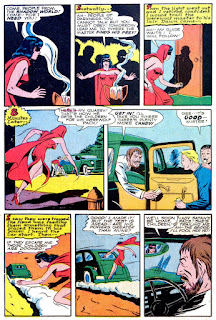 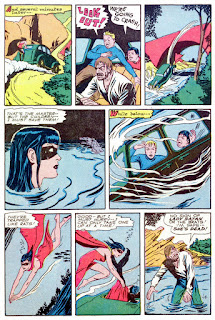 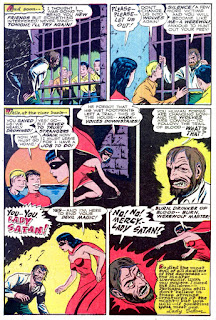 Madam Satan is fascinating.
Not much of a story, but I really like the character, though she's as clumsy as can be as a "Devil's ally". Anyway:
1) We finally know who inspired John Romita for his Satana, the Devil's Daughter (for her hairstyle at least).
2) Having read something from Boccaccio and Chaucer, I'd be more afraid of Brother Sunbeam than of any Satan's ally. But I'd really like a "Brother Sunbeam Meets Brother Power (the Geek)" team-up miniseries.
3) Madam Satan anticipates some interesting italian comics of the 70's, like Satanik and Lucifera.
4) I love wicked, beautiful ladies (let's skip the skull-face).

The second story is nice also, but the lady's not evil... :(

J D, I don't know if there was a backlash from any Christian individual or group against Madam Satan, but I would not doubt it if someone told me the publisher got criticized by those folks for the character.

I'm all for your idea of a Brother Sunbeam meets Brother Power (the Geek). I am one of those people who actually bought the Geek when that comic was published in the late sixties. The cover of #1 promised "Here is the real-life scene of the dangers in Hippie Land!" and then went on to show something as far removed from any "real-life" as was possible, even for a comic book.

"Stop! I am Brother Sunbeam, and I interrupt this comic story to advertise bread!"

The Madam Satan story was genuinely suspenseful, but the Lady Satan one ended way too suddenly, as if the creators just ran out of space! Oops!

I really like the Madam Satan art; it seems a part of the Lou Fine/Rudy Palais/Bob Fuje school that was thriving for a while there.

The Geek is a sentimental favorite. Joe Simon was great especially at the layout of covers, splashes and logos. The presentation on those two issues was strong, and the book was only killed because Mort Weisinger complained to the publisher about it. What a dip. ( Publisher concerns were also why the character didn't have Simon's original name, the Freak. Apparently references to biting off the heads of live chickens was better than a possible drug reference.)

Wow, Lady Satan was a masterclass in how note to write a story!

Madam Satan was a lot of fun. The big crackling devil, her obvious and incredibly convenient plot (things just kept getting added that made her plot work, like the evil guy showing up and the wife having the death-like fit.)

One thing to note: Madam Satan's had two powers: sex and lying. Ah, the 40s!

This is the first deus ex machina that rode a burro!

Madam Satan is currently appearing in the Sabrina series by Archie Comics. It's a good read.

In 1930, there was a rather remarkable film from Cecil B. de Mille entitled “Madam Satan”.

As to the Madam Satan here, her arc was presented a few years ago at Atomic Surgery (a 'blog that I no longer follow after observing its owner filter a debate to make some poor guy look like a fool and a coward). It seems that she was consistently unsuccessful in gathering souls for her spouse, though she did manage to kill a few people.

If there's to be a team-up with Brother Sunshine and Brother Power, then it might also include Brother Voodoo and perhaps the Smith Brothers. But let's hope that the BeeGees stay away.

Hi Pappy,
I looked up that Weird Horrors reprint. The text was changed quite a bit, so Lady Satan became nurse LeBlanc, etc. Good catch!

Darci, they did that at St John...put new dialogue and plots to old artwork, recycling stories from the Harry "A" Chesler comics of the forties. I showed an example in Pappy's #927.

Daniel, another old movie that is new to me. On my "to watch someday" list it goes.

I checked out the blog you mentioned, and it is also new to me. I have no opinion of it, since I have not read it. I would like to make a suggestion to anyone thinking of blogging...if your blog is about comics, put COMICS prominently in the title. That way search engines pick it up when someone googles the word. (Just another unsolicited and overly obvious opinion by your friendly comic book blogger, Pappy.)

Brian, sex and lying, gee...I too have lied to have sex. Is that a bad thing? I guess it depends on the lie (another overly obvious opinion by your friendly dirty old man blogger, Pappy).

Thanks for checking in.

Ryan, in today's world of graphic novel-length stories, five or six pages just seems too short to tell a story. And it was.

Brother Sunbeam not only reminds me of bread, but a toaster, a sports car, and that old chestnut of a hymn, "Jesus Wants Me For a Sunbeam."

Kenn, another thing I did not know, that Madam Satan is currently appearing in comics. I don't have a local comic book store, nor do I buy new comics (retired, fixed income, comics too much of a luxury), so thanks for the information and your note.

Russ, did Weisinger's complaint have to do with the Geek's storyline, hippies, or the rough history between Simon and Kirby and DC?

I don't have documentary knowledge, but I believe Infantino has said in interviews that Weisinger was very hostile to the sympathetic portrayal of hippies. Simon thought they were afraid of drug references, which is why the characters name was changed, though there is absolutely no depiction of drug use in the comic. I think you may be onto something about Mort's dislike of Simon and Kirby, though I haven't read that in regard to the Geek. Obviously they hadn't had time to get sales figures back after only two issues, so the cancellation was a political assassination of some kind. Did I mention that Weisinger was a dip?

My own 'blog is about whatever I felt like writing. Symantec claims that it's pornography.