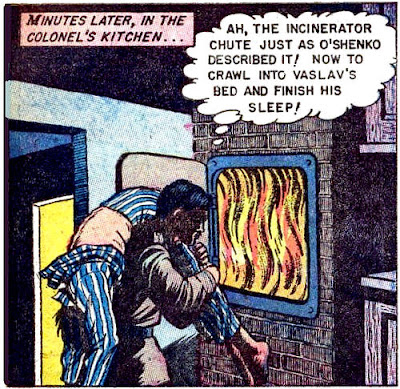 “Operation Satellite” is a story based on a real fear, that nuclear bombs would rain down on us from an earth-orbiting satellite. It is a combination James Bond-Mission: Impossible intrigue, well-drawn by Lou Cameron.

In real life, some U.S. military planners considered such weapons necessary, and in 1959 the United States had plans to place a military facility on the moon by 1965, with missiles pointed at earth.* Yikes! I remember the paranoia of the era. My parents considered building a bomb shelter, but decided against it. Had they built it I might have had a handy place to store and read my comic books.

The story is what I call a future-in-the-past story. It is set in 1960, now long past for us, but far enough in the future for the purposes of the story, published in Atomic War #4, 1953 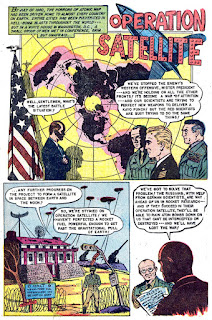 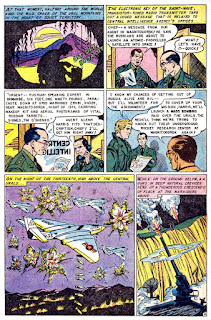 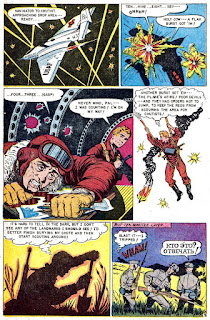 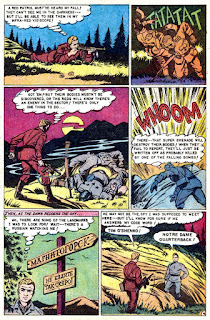 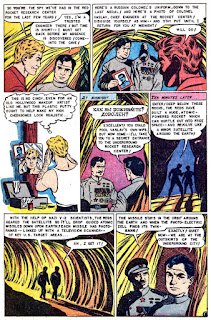 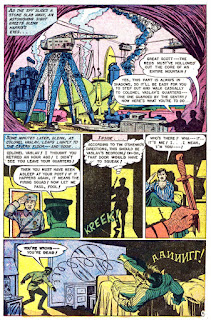 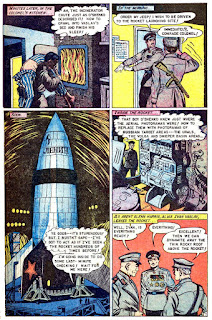 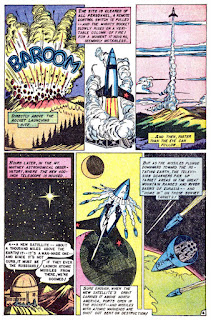 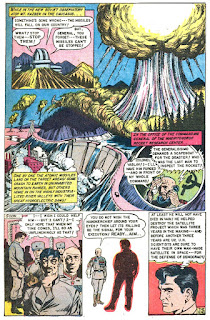 *In 1967 the U.N. declared space a military-free zone. Despite that, if we knew what was really above the earth it would probably scare the pants off us, You can read about the declassified 1959 plans for “Project Horizon,” that base in “An Army Base on the Moon” from Defense Media Network.com.

Chilling. The premise is simply frightening.
The story is grisly but very good, well above the average comics about hypothetical WW3, and very "adult" compared to those stories where an American Hero saves the day, all by himself.
The reference to "nazi scientists" helping the Russians is interesting. On OUR Earth, Americans were those who gained more from their help. As far as we know at least.

I guess atomic bomb shelters were pretty ineffective, but a great (if expensive) psychological help. As a matter of fact, I fear that today localized atomic blasts (for terroristic purposes) are MORE LIKELY to happen than in the Cold War days. We were all glad for the end of Balance of Terror, we considered the "terror" part of the bargain bu we forgot that it was, all in all, a "balance".

1980 has been a good choice for fictional "near future" scenarios. It was still good in 1970, when Jerry Anderson did "UFO" (speaking of Moon Bases).

Semyon Timoshenko was a famous commander of the Red Army. Is Tim O'Shenko a Russian of Irish descent? :)

Atomic War was certainly mighty grim. Interesting that it conjectured that the Soviet Union would be first into space. As to the help of German scientists, well, yeah, we all know more of that story.

I don't know why Harris didn't high-tail it out of the base, remove his make-up, and get back into a US uniform after he'd done his job. I also don't know what sort of make-up he might have used such that there weren't some sort of revelation when he was being struck in the face.

6:3-5 have the knife thrown as in a theatrical act. This requires that the thrower give the knife a spin rate at which it will rotate n + ½ times, and hit the target-point first. That's not how it would be done, especially with an unpredictably moving target. Colonel Rex Applegate, who “wrote the book” on knife-fighting presumed that knives would be thrown in this manner, and thus discounted them as practical throwing weapons. But there are other ways of throwing knives which are quite practical. With these methods, the knife must be released from being held by its handle, and thrown in a way with little or no spin. (A Fun Fact to work into job interviews.)

Well, that was upbeat. Did Atomic War have a continuity? I mean, was every issue set in that particular world of 1980? I just read an old pulp story called "Enslaved Brains," originally penned by Earl and Otto Binder in 1933 and revised in the early 50s. It was set in the future of 1973 and, despite all the astonishing advancements, humanity had still not gotten to the moon. This Atomic War tale reminded me of that. I loved the part where the navigator kept counting as he was dying, and the real colonel's SFX-style cry was rendered in Russian. Nice detail.

It would have been cool if the door had gone “ƘРИК!” as it were opened.

Ryan, J D, "1980" for the time is my mistake, misreading the Leroy lettering...the story is actually set in 1960, which, for the real-life United States space program and for military development, was quite a bit earlier. I have edited the post after posting your comments.

Thanks for both of you. Ryan, Atomic War didn't have regular characters that I can see (I only have #4, the last of four issues). It does reflect the atomic paranoia of the decade of the 1950s, which I recall ran as an undercurrent in our daily lives (Elvis, rock 'n' roll, and everything else people think of the '50s notwithstanding).

J D, good catch on that "Irish-Russian" name. The writer probably pulled it out of thin air.

Daniel, thanks for the observations on knife fighting. When I look back at old movies (and comics and pop culture in general), knives and arrows seem to have a magic power. They always seem to hit the victim in an exact spot that kills him instantly.

I wouldn't like anyone shooting arrows at me, but if someone were chasing me with murder in mind I'd prefer they were throwing a knife at me. Even as slow as I am I think I could move fast enough that the odds of having a thrown knife kill me would be in my favor. A good archer could cause considerably more damage, although once again he would have to hit a vital spot to kill me instantly. And yes, I'm the kind of guy who thinks about things like that, having noticed that those who walk into buildings intent on killing as many people as possible don't use a bow and arrow or throwing knives.

It depends on who throws the knife, I guess. We wouldn't have the ghost of a chance against "Chief" of the Garrison Gorillas, for instance.
I knew economy is tough stuff, but I didn't expect such an expertise was needed to work in that field...

Issue #4 is only one that I have of this title also.
All four issues are available for viewing on comicbookplus.com. Dynamic covers on all and Lou Cameron stories in each issue.

OMG Pappity 1960 sure seams like a terrorble place I hope I neverer live 2C it yo OMG!!

Mike, thanks for the information.

Alicia, what I remember about 1960 is that it was the first time I became interested in a presidential election.